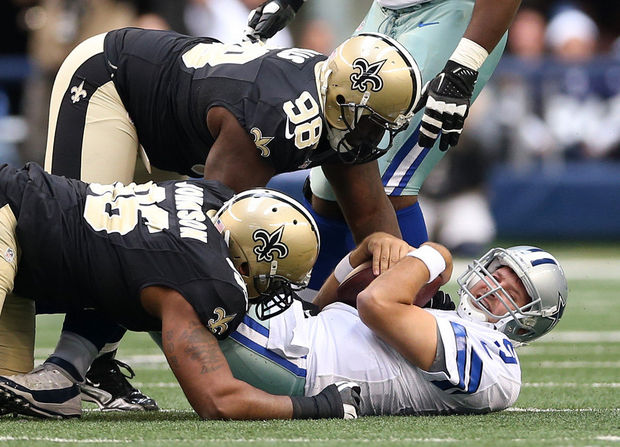 NFL News and Rumors
Sunday night will provide NFL gambling fans with an amazing game as the New Orleans Saints look to even their record at 2-2 against the Dallas Cowboys. The match is Sunday at 8:30 pm with the Cowboys coming into the game holding a 2-1 record and the Saints a 1-2 mark.The last time these two teams met on the field the New Orleans Saints smashed Dallas 49-17 at the Mercedes-Benz Superdome. The Saints probably won’t beat Dallas by 32 points this time, but the need to look for redemption against the Cowboys and revert the negative season start.

The pressure is on the Saints, who will look to avoid a 1-3 start and fall even further in the NFL South division. After two back-to-back losses to Atlanta and Cleveland, the Saints recovered their path with a home win over the Minnesota Vikings last week. New Orleans was able to put together an early 13-0 lead and then secure the victory with a touchdown in the fourth quarter, but despite the fact the team showed some improvements, the 20 points scored in that game was the lowest total at home for the Saints since the 2010 season.

-The total has gone under in six of New Orleans’s last eight games on the road.-The Saints are 8-1 SU in their last nine games against Dallas and 8-2 ATS in its last 10 matchups.-The total has gone over in four of Dallas’ last five games when playing New Orleans.-This is the 27th matchup between the Cowboys and the Saints. The Cowboys hold a 15-11 edge in the all-time series.

The Cowboys are a strong and talented team, but they aren’t flawless at home. They lost the season opener at home against the 49ers and then went to win back to back games on the road against the Titans on Week 2 and the St. Louis Rams on Week 3. The win against St. Louis was the product of an amazing comeback. Dallas overcame a 21-0 deficit on the first half, with quarterback Tony Romo leading the comeback and Morris Claiborne pulling a game-wining interception that secured a close 34-31 win over the Rams. Romo and co. showed they have guts and announced themselves as a contender in the NFC East and jumping to the second spot in that division right behind the 3-0 Philadelphia Eagles.

These teams met last November at the Superdome. For those who don’t remember what happened last year, the Cowboys had a 10-7 lead, but the Saints went up to score 28 points to win 49-17 and cover as six-point favorites. Now, things are expected to be much balanced since the Saints won’t be playing in their home stadium.On the road, New Orleans has been one of the worst in the NFL. The Saints are 1-7 in his last eight road games. Adding to that, the team’s offense is far from spectacular, with QB Drew Brees scoring 12 touchdowns and giving up nine interceptions.Game OddsSAINTS: 3-110, OV 53 ½ -110, ML -165COWBOYS: +3-110, UN 53 ½ -110, ML +145

The Cowboys have enough offensive resources to beat the Saints. After a horrible first half against the San Francisco 49ers, the team has outscored rivals 74-41 and covered the NFL game spread two games in a row. So expect the Cowboys to play a great game and beat the Saints on Sunday night.
Older post
Newer post