Maybe it’s me, but I think the Indianapolis Colts (11-5 SU, 10-5-1 ATS, 9-7 O/U) are entering the 2015 NFL regular season with one huge question surrounding their young and blossoming team.Can talented signal-caller Andrew Luck and his band of merry mates find the answer for overcoming the combination of New England Patriots head coach and quarterback Bill Belichick and Tom Brady?Or…will Luck become another version of Peyton Manning, a future Hall of Famer, whose postseason success was almost perennially halted by the aforementioned pair of Patriots?We’ll examine the answer to that question and much more in this in-depth betting breakdown on the Colts chances of cashing in on their fun-filled Super Bowl Futures Odds. 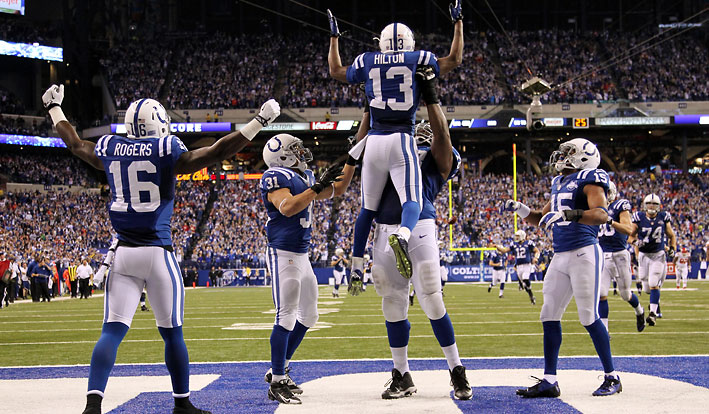 There was plenty of good for Indianapolis last season, even though their 2014 campaign ended in both, a resounding loss – and a bit of infamy thanks to last season’s arrest of owner Jim Irsay. After losing a pair of heartbreakers against Denver and Philadelphia to kick of their 2014 season, the Colts then won their next five games and 11 of their final 14 overall. Along the way, Luck had a fantastic campaign in finishing third in passing (4,761 yards) while helping Indianapolis finish third in total offense, first in passing (305.9 ypg) and sixth in scoring (28.6 ppg).Luck’s favorite target, wide receiver T.Y. Hilton continued to impress as he finished sixth in receiving yards (1,345) and best of all, the accurate Luck stayed injury-free and that’s a good thing in today’s fast-paced, hard-hitting-than-ever NFL. Last but certainly not least, Indianapolis compiled an impressive 10-5-1 ATS mark. 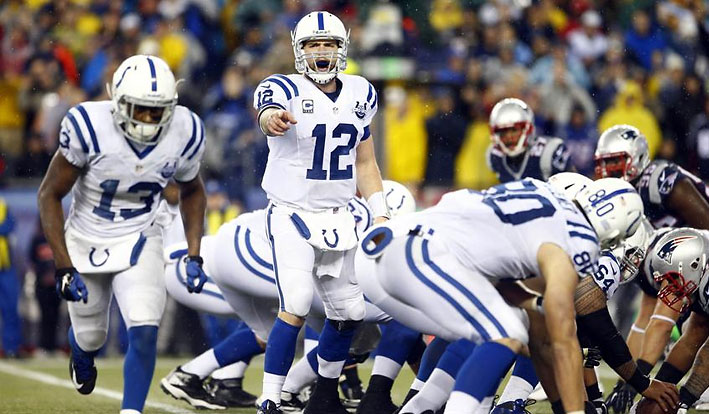 Like most teams, there was also a bit of ‘bad’ for the Colts last season as they finished a discouraging 22nd in rushing thanks to their failed experiment with underachieving running back Trent Richardson. The Colts also ranked in the middle third in almost every meaningful defensive statistical category including total yards (11th), pass defense (12th), rushing yards allowed (18th) and points allowed (23.1 ppg).

Indianapolis didn’t have any real ‘ugly’ incidents either on the field or off last season, though team did have to deal with Irsay’s arrest-related issues early on. Other than that – and the fact that the once highly-touted Richardson flamed out miserably, Indianapolis had an ‘ugly-free season. 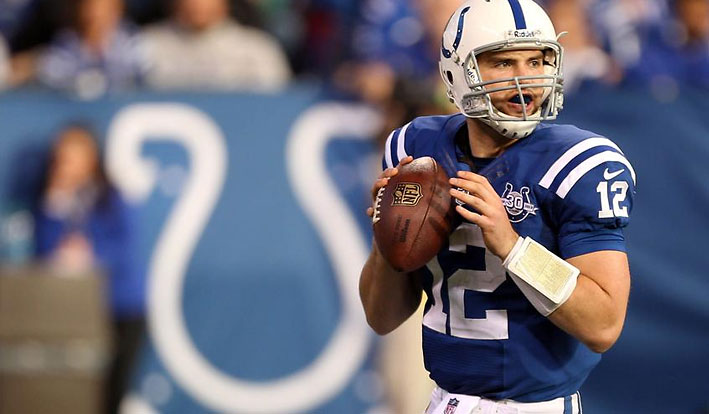 Let’s take a look at Indianapolis’ offensive statistics from this past season.

Here is a look at the Colts’ team defensive statistics. 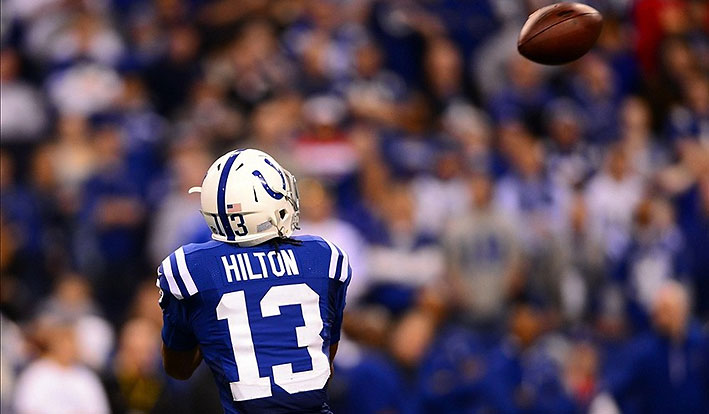 Indianapolis was really mediocre across the board defensively, but the Colts’ defensive backfield needs to be addressed first and foremost in my estimation. Veteran cornerback Vontae Davis and safety  Sergio Brown are the only players I’d keep as starters from this unit. Safety Mike Adams and cornerback Greg Toler both left a lot to be desired last season and could theoretically be replaced as starters in 2015.

Veteran Cory Redding is getting up there in age, but he was still the Colts’ best defensive lineman this past season. Nose tackle Josh Chapman and left end Ricky Jean-Francois either need to be coached up – or sat down as backups. 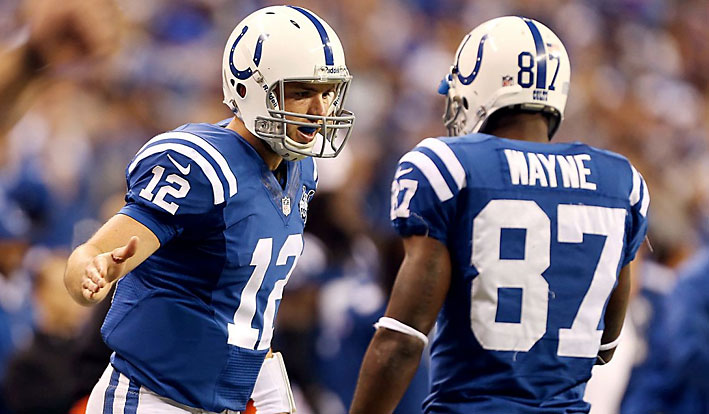 Indy’s offensive linemen are unheralded and vastly unknown for a reason – because they are the definition of average. The Colts could go for some veteran free agents to address their needs here while grabbing a couple of o-linemen in the later rounds of the draft.

There’s 90 percent chance that longtime superstar Reggie Wayne will not be back next season, leaving the Colts in search of another wide receiver opposite T.Y. Hilton.

Reggie Wayne is still deciding whether he will play next season at age 37. It’s complicated. http://t.co/0Grd9GD8nZ pic.twitter.com/mGduhy7mIR— IndyStar (@indystar) February 21, 2015

The good news is that Indianapolis saw a resurgent Hakeem Nicks play extremely well in their thrilling upset playoff win over Denver. When Nicks is healthy (that’s a big if) he’s a sure-fire starting caliber kind of wideout. The problem is that he’s injured far too often. 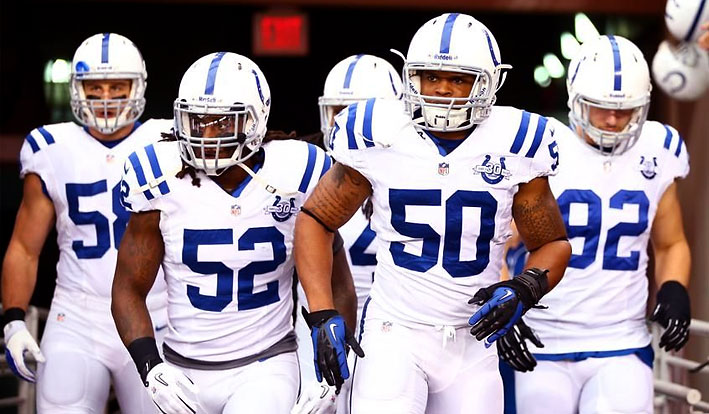 I’m sick of watching Trent Richardson flounder and I suspect head coach Chuck Pagano and the rest of the Colts’ staff are too. Richardson will almost assuredly be jettisoned this offseason, but Indy may keep veteran Ahmad Bradshaw after watching him average an impressive 4.7 yards per carry in his two seasons with the Colts. The bad news is that Bradshaw isn’t getting any younger (he’s 28) and generally gets injured at some point of the season.The good news is that the Colts may have found their starting running back for the near and foreseeable future in hard-nosed running back Daniel ‘Boom’ Herron (4.5ypc), but the key word here is ‘may’. Indy will need at least one more serviceable running back if they’re ever going to find the offensive balance they so desperately need.

It’s being projected that Indy could go after a defensive lineman like former Oregon star Arik Armstead and that’s a good thing, seeing as how Indy needs a safe, stable player with this pick, not one that may turn into a superstar – or flame out faster than…Trent Richardson (ouch). 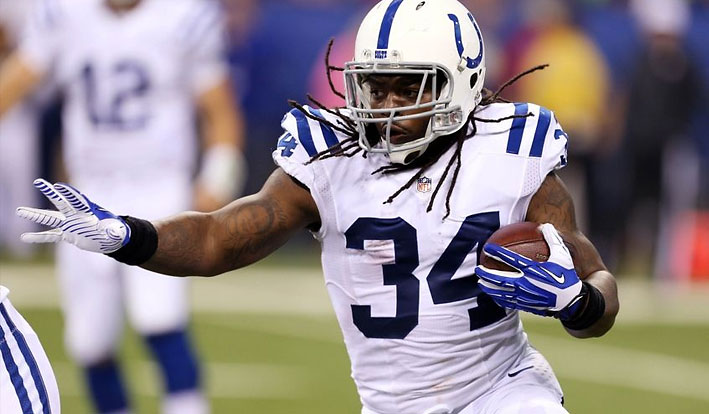 Sure, Indy’s season ended with a resounding 45-7 loss to Bill Belichick, Tom Brady and the rest of the New England Patriots, but the Colts look like they’re going to be a legitimate AFC title contender for as long as Andrew Luck is under center, which, I suspect will be for the next decade at the very least.Having said that, I like the Colts, who have the 31st strongest schedule in the league in 2015, to easily reach the double-digit win total and get back into the postseason. I think Indianapolis could really challenge for conference supremacy if they address some of their more pressing needs, but at the very least, they’ll have a shot.Now, whether they can get past the Patriots is another story all together. Luck is 0-4 against New England in his career, but his winless record is not the most disturbing fact about this matchup. It’s how badly they’ve lost to the Pats that’s most bothersome. 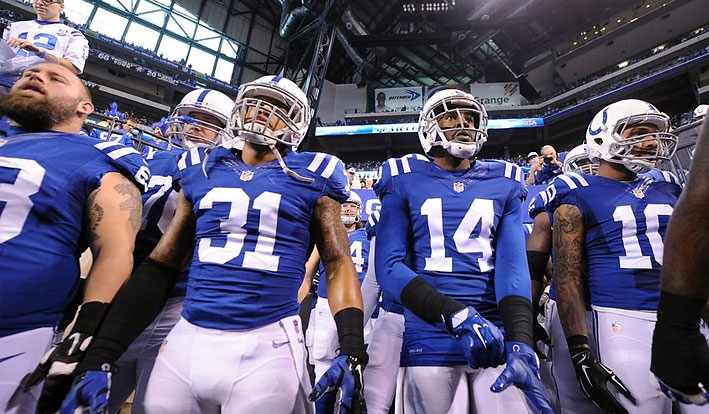 New England has outscored Indianapolis 189-73 over the four games, including last season’s Deflategate affair. Clearly, Luck, like his predecessor Manning, needs to figure out how to beat New England’s future Hall of Fame quarterback and head coach if he wants to have a perennial chance at winning the AFC.If Luck and whoever is coaching the Colts along the way can’t figure out how to beat those pesky Pats…well….you know how the story goes.
Older post
Newer post