NFL News and Rumors
Every year, NFL teams battle to emerge top of their division and make it to the playoffs, but inevitably, some of them always end up on the wrong end of the NFL betting lines and odds.  Whether key players succumb to injuries or coaches and general managers disagree on key issues relating to the team, it is the norm that some teams will fail to live up to the high offseason expectations. So although all teams are in the competition to challenge for various titles, we can attempt to point out the teams that will not make it up the mountain in 2015, based on various surrounding reasons. Keeping that in mind, here are a number of teams that might fail in their efforts to improve their last season performances, taking a step back in 2015.

Without Stevan Ridley, Shane Vereen, Vince Wilfork, Darrelle Revis and Brandon Browner in the Patriots lineup, it will be tricky for the 37-year-old QB Tom Brady to play effectively and get sufficient protection, as was the case last year. Meanwhile, the Jets and the Bills have shown a lot of improvement this offseason, and the Dolphins are not left behind either in the AFC East race. Therefore, although the Patriots won the Super Bowl the previous season, and are among the eight teams to have defended the Super Bowl title, New England’s squad headed into 2015 is likely not improve from last year’s Super Bowl winning feat. Furthermore, Brady’s possible suspension will throw in distractions ahead of 2015 season, making it hard to start the season on a strong note.

The Bengals’ major problem is over reliance on QB Andy Dalton, who in fact tends to lose it when he is under pressure. Meanwhile, gone are the days when Cincinnati was amongst the league’s top defense teams under former defensive coordinator Mike Zimmer who took the head-coaching job in Minnesota. The Bengals defense ranked No.3 overall in 2013, but all that changed in 2014 to No. 22 due to coaching changes. This was evident as Cincinnati was poor at pressurizing the opposing QBs and the secondary did very little to overcome the deficiency. With the Ravens and Steelers looking well-set to take control of the AFC North in 2015, yet the Bengals are still meddling with their poor defensive game and an out-of-sorts QB, Cincinnati is a team you should largely avoid in this year’s betting lines, as it is likely to disappoint majorly.

Although the Chiefs appears strong, they have a chance of taking a step back in 2015 going by the depth of the four AFC West rivals. The Chiefs QB Alex Smith has too many passing-related limitations, making the Chiefs’ aerial game too predictable and hackable for opponents. Additionally, RB Jamaal Charles suffered a number of injuries and it looks like his body might be giving up on him. Not to mention, both San Diego and Denver are solid frontrunners for the divisional title. So although the Chiefs have had a good offseason and they could be a surprisingly good team, it would be best to bid your time and assess them before going full throttle on their price in the NFL betting odds.

It is always hard to project the possibilities in the NFC East Division during the offseason., and this year is no different. The Cowboys are looking more like potential Super Bowl contenders in the approaching season, the Giants will almost certainly bounce back after a disappointing 2014 season, and the Redskins and Robert Griffin III pack an element of surprise. This means that the Eagles must come up with a formula of offsetting all the hopes by the above teams and find their own way of rising to the cream of the division. That is easier said than done after Chip Kelly riskily traded away Nick Foles for the injury-prone Sam Bradford, while Mark Sanchez and giving a new deal to the embattled Tim Tebow. With such a big gamble in the QB department, and with no assurances that things will work to his favor, the entire experiment could fail miserably and land you into massive losses, so better be wary of the Eagles and your hopes of how high they will fly in the new season. 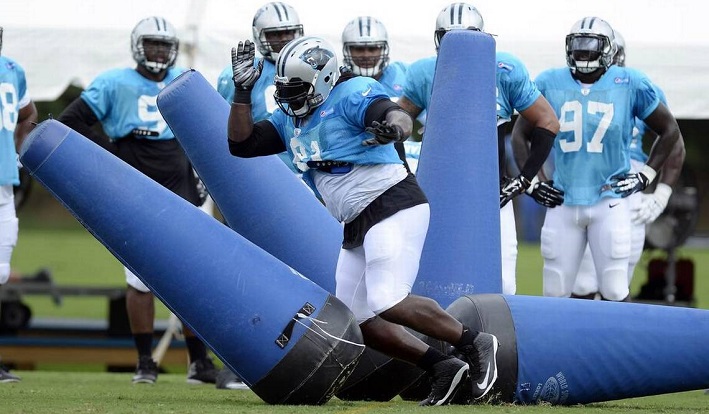 Undeniably, the Panthers have a solid defense coming into the new season. Unfortunately, their offense is nothing to match the defense. QB Cam Newton is a unique player who is expected to have a long-term success with the Panthers, but the honest reality is that he lacks necessary talents around him. Of course, Carolina recently invested in a pair couple of receiving corps, bringing in Kelvin Benjamin and Devin Funchess, but it still remains to be seen if these prospects will live up to their hype or become busts, like many others have done before them. And to make matters worse, the Panthers recorded, the worse QB protection tackles than any other team in the league last year. Without better protection, not even Newton and his explosive athleticism will be able to take relentless hits and make plays or even stay healthy. Then there is the issue of divisional superiority, where the Saints and Falcons are not looking softer like they’ve been in the last two years. The competition is thus likely to be stiffer, making it hard for Carolina to succeed. With such factors considered, it doesn’t take a rocket scientist to figure out that the Panthers will be a risk-full team to bet on in the new season. Sources: ESPN.go.com (http://espn.go.com/nfl/story/_/id/12867594/punishments-handed-tom-brady-new-england-patriots-deflategate) NFL.com (http://www.nfl.com/player/kelvinbenjamin/2543471/profile)
Older post
Newer post