NFL News and Rumors
Week in and week out, the league’s quarterbacks assume the glory and absorb the blame, all depending on how they perform. A lot of the time, if a team’s signal-caller throws a couple of touchdown passes and doesn’t give up an interception or a fumble, the team’s fans just give him a “hum-ho” because that’s what he’s supposed to do. If the team loses – even though the quarterback had a decent game, and it was the defense that couldn’t stop the other side from scoring – a lot of times the quarterback takes the lumps for the problem, because he’s the public face of the franchise. Here is, in our opinion, the most underrated quarterback in the history of the NFL – a player who deserved much better from the NFL betting fan base than he received.

(Edmonton Eskimos, Houston Oilers, Minnesota Vikings, Seattle Seahawks, Kansas City Chiefs) When Warren Moon came out of college in 1978, his Washington Huskies had just defeated the venerable Michigan Wolverines in the Rose Bowl, and Moon had been named the game’s Most Valuable Player, having run for two touchdowns and thrown for another. However, Moon had been a rarity, as most black would-be quarterbacks were shuffled into other positions in college, and they certainly weren’t around in the NFL. Unbelievably, Moon went through the draft with no takers. So he took his talents to Edmonton, where the Eskimos from the Canadian Football League. His first five seasons featured five consecutive Grey Cup (the CFL’s championship game) titles, from 1978 – 1982. Moon won the Grey Cup Most Valuable Player award on the offensive side in both the 1980 and 1982 title games, and in 1982, he also became the first professional quarterback to throw for 5,000 yards in a season. He won the CFL’s Most Outstanding Player Award in 1983. All in all, he led his team to 9 wins in 10 playoff games, and today he is in the Canadian Football Hall of Fame and resides on the Edmonton Eskimos Wall of Honour. In 2006, the Canadian network TSN listed him as the fifth greatest player in the history of the CFL. 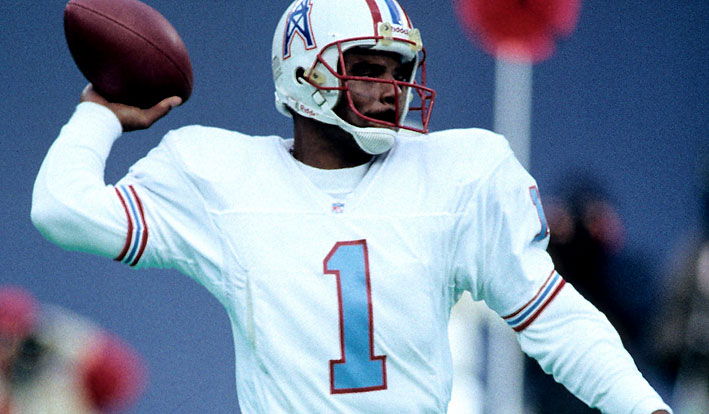 So how could Warren Moon be underrated? Because in the United States, almost no one pays attention to the CFL. However, NFL general managers had been paying attention, and when Moon declared an interest in joining the NFL, teams went into a bidding war. Moon went to Houston, following his former Eskimos coach Hugh Campbell. It took a few years for the Oilers to figure out how to use Moon’s arm, and in 1987, Moon led the Oilers to their first winning record since 1980. In his first playoff game, Moon led the Oilers to an overtime win against Seattle (then in the AFC). In 1993, Moon’s Oilers finished 12-4 and won the AFC Central Division, but lost in the divisional round of the playoffs to Kansas City. Similarly disappointing finishes tracked him elsewhere in the NFL. In Minnesota, he broke his collarbone and missed half of 1996, and then he wouldn’t agree to a pay cut to be Brad Johnson’s backup. He spent two years in Seattle and then two years with Kansas City, but he was well past his prime. Even so, Moon was named to 9 Pro Bowls and entered the Pro Football Hall of Fame in 2006. Because his titles were in the CFL, though, the NFL never got to see just how great he could be. 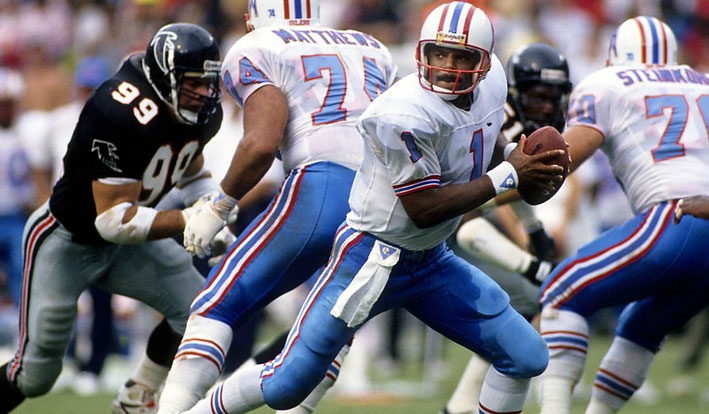 But Moon is not alone…

Other underrated quarterbacks in NFL history include Doug Flutie, who also had to ply his trade in the CFL for years because NFL teams thought he was too short. Kurt Warner spent several years dominating the Arena Football League before the NFL finally found him worthy and he took the St. Louis Rams to a Super Bowl win (and almost did the same thing in Arizona, just falling short to the Steelers). Joe Kapp (the only Hispanic to start a Super Bowl game) did so with a Minnesota Vikings team that would lose all four of its title tilts. Sources Wikipedia.org (http://en.wikipedia.org/wiki/Warren_Moon) ProFootballHoF.com (http://www.profootballhof.com/hall/story.aspx?story_id=1953)
Older post
Newer post