NFL News and Rumors
If you’re an NFL betting fanatic and you feel like you’re going through some sort of football ‘withdrawal’ then you should know that you’re not alone.As a matter of fact, I’m so in need of some football that I was prompted to write this column for mybookie.ag NFL gaming enthusiasts that are equally in need of some sort of gridiron action. Thanks to this fun-filled look at my top five running backs in league history, you’ll be able to feed your need for some form of NFL gridiron information.With all of that said, let’s rock and roll. Throughout the history of the NFL, there have been numerous of running backs that have captured our imaginations while simultaneously taking our breath away. When it comes to ranking the greatest rushers of all-time, this task was more than formidable.Sure, the top two or three aren’t hard to pick out, but the remaining two positions could go to numerous runners – it really is a matter of opinion.Having said that…here is my list of the five greatest rushers in NFL history. In reverse order, here they are. 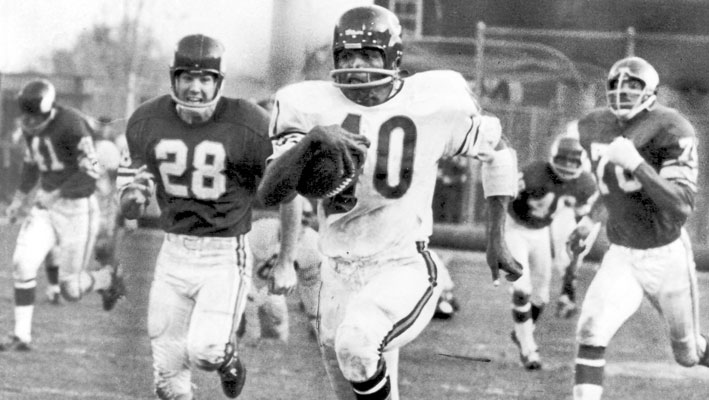 Sure, there are other running backs whose numbers are far more impressive, but I genuinely believe that most knowledgeable (that’s code word for old) football observers know that Gale Sayers was one of the game’s greatest runners – and the most versatile – running backs to ever suit up in league history.I think it goes without saying that…if Sayers’ career – which was riddled with several devastating injuries – had lasted longer, who knows how many records he would have set.As a rookie Sayers once scored a record-tying six touchdowns against the San Francisco 49ers. The variety he used that day included an 80-yard pass-run play, a 50-yard rush and a 65-yard punt return. For the entire season, he scored 22 touchdowns and 132 points, both then-rookie records.  In his relatively short career, Sayers racked up a stunning 9,435 combined yards, 4,956 yards rushing, and 336 points scored. At the time of his retirement he was the NFL’s all-time leader in kickoff returns. Sayers earned All-NFL honors five consecutive years and was named Offensive Player of the Game in three of the four Pro Bowls in which he played.Incredibly, three of my top five running backs of all-time, including Gale Sayers, had careers that could have lasted considerably longer if things had turned out differently. 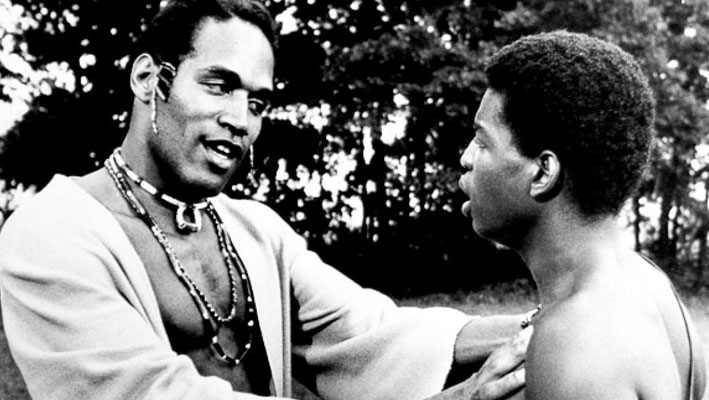 I think a lot of younger people may only remember O.J. for his infamous murder trial over a decade ago, but I remember O.J. when he was truly the man – on the football field.I’m also not ashamed to say that I spent many a day in the early 1970s playing football pretending to be O.J. Simpson.Anyone who knows a thing about football knows Simpson was one of the greatest running backs ever – and to this day – he remains the only running back in NFL history to rush for 2,000 yards in an NFL season – in 14 games.In 11 seasons, Simpson rushed for 11,236 yards, added another 2,142 yards on 203 pass receptions. In 1973 Simpson became the first back in history to rush for over 2,000 yards when he racked up a whopping 419 yards in his last two games that year, to finish with a staggering total of 2,003 yards. Masking this feat even more mind-boggling for me is the fact that the Bills played half of their games in the freezing cold and snowy conditions of Buffalo’s Rich Stadium.Simpson also led the league in rushing in 1972, 1973, 1975 and 1976. He was named NFL Player of the Year in 1972, 1973 and 1975 and was both All-AFC and All-Pro five straight years from 1972 through 1976.I don’t care what anybody says – barring all crime-related incidents – “The Juice” remains one of the top five running backs in NFL history. 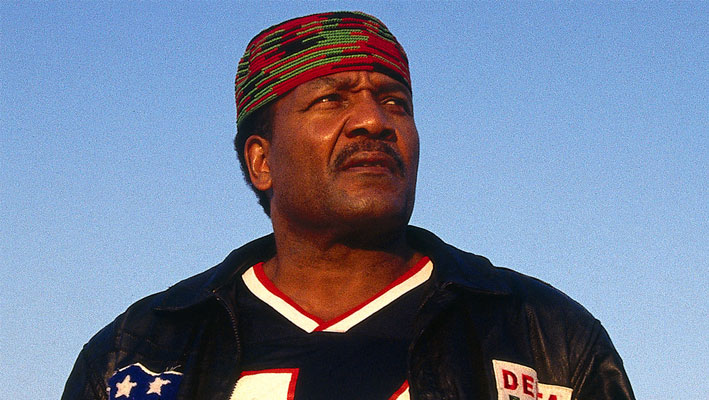 Just like the two aforementioned runners, Jim Brown was in a class of his own. Sure there have been other “big” backs to leave their mark on the game, but none like Brown – who retired waaaaay too early at age of 30.I could get into his career numbers of 12,312 rushing yards and 15,459 combined net yards, but that would not do Brown any justice at all. All I can say about Brown is that Jim Brown possessed a rare combination of speed, power and agility that had never been seen before – and has only been duplicated by one or two running backs since if you ask me (Earl Campbell). Brown could outrun, outsmart or just plain, overpower any defender – or team anytime he wanted.Brown was a unanimous first-team All-NFL pick eight times and played in nine Pro Bowls in nine years. Brown was unanimously named the Rookie of the Year in 1957 and earned league MVP honors four times (1957, 1958, 1963, and 1965).As extraordinary as Brown’s statistics were, his durability may have been even more amazing. Despite a constant pounding from defenses always stacked against him, Brown never missed a game in nine years. 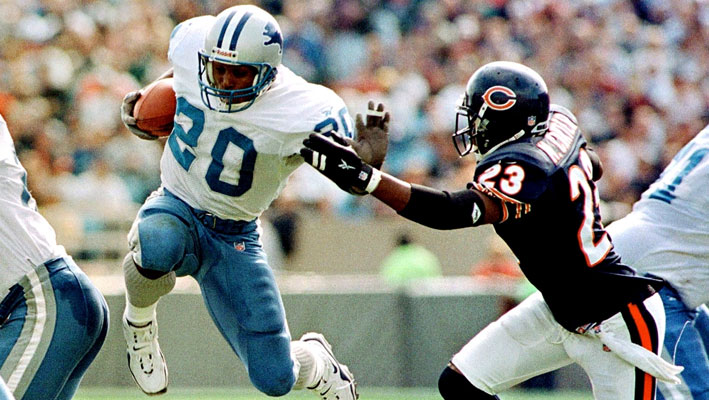 I never thought I’d see another running back in my lifetime that was as good as Walter Payton, but that’s exactly what Barry Sanders was. The game’s most electrifying runner ever, Sanders rushed for more than 1,000 yards in each of his 10 seasons with the Detroit Lions (1989-1998) and was also just the third player in NFL history to rush for more than 2,000 yards in a season, a feat which he accomplished in 1997 when he rushed for a league leading 2,053 yards on his way to winning the league’s MVP title. Sanders also set another record that year by rushing for more than 100 yards in an incredible 14 consecutive games.Records aside, Sanders was the most untouchable runner I have ever seen. “Elusive” is a word that does Sanders absolutely no justice at all.“He makes you miss so bad, you kind of look up in the stands and wonder if anybody’s looking at you,” Atlanta Falcons cornerback D.J. Johnson once remarked. “You’ve got 60,000 people in there and you wonder if anyone saw you miss that tackle.”Sanders was also a first- or second-team All-Pro ten consecutive seasons and became the first NFL running back to record five 1,500-yard rushing seasons, in addition to being the only back to do so in four consecutive seasons (1994-1997).Had he not retired prematurely – because of numerous, atrocious Lions teams – he would have certainly surpassed Payton’s career rushing total and may have set the bar so high that no one would have passed it anytime soon. As it stands right now, Sanders was still good enough to become the second greatest running back of all-time. 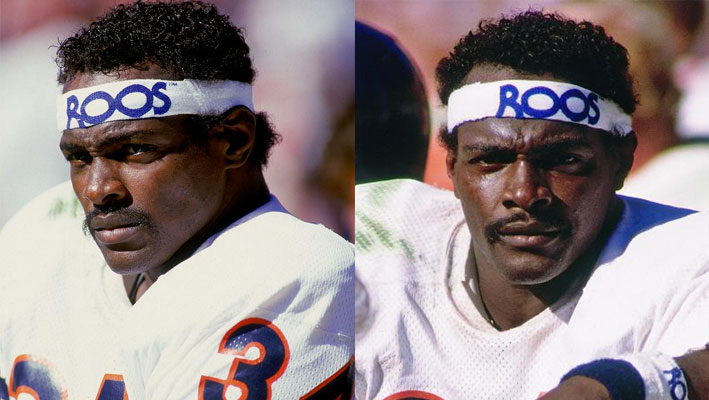 There has never been – nor will there ever be – another Walter Payton. The aptly named “Sweetness” was, in my mind, the greatest running back to ever lace up a pair of cleats in NFL history.Not only did Payton retire as the league’s all-time leading rusher, but he accomplished the feat by being a model of consistency that has only been matched by one other runner in NFL history.The fourth player chosen in the 1975 draft, the 5-10 Payton retired with 16,726 total yards and 10 seasons with 1,000 or more rushing yards, 275 yards rushing in one game against Minnesota in 1977, 77 games with more than 100 yards rushing, and 110 rushing touchdowns. He also scored an extraordinary 750 points on 125 touchdowns – in an era when offenses weren’t nearly as potent – or liberal.One thing I think most people may not remember is that Walter Payton carried the Bears offense for several years when they were absolutely atrocious. The Bears’ favorite – and best – play during those lean years before they finally broke through and won a Super Bowl title in 1985, was to run Payton to the left, to the right or up the middle. They were that bad.Payton however, still managed to win the NFC rushing title five straight years from 1976 to 1980. He was named both, All-Pro and All-NFC, seven times and played in nine Pro Bowl games. Payton was selected as the NFL’s Most Valuable Player in 1977 and 1985, the NFL Offensive Player of the Year in 1977 and 1985 and the NFC Most Valuable Player in 1977.One of the things I loved about Payton was his durability. Payton missed one game in his rookie season and then played in 186 consecutive games over the remaining 12 seasons of his career. I loved the way he delivered more punishment to would-be tacklers than he received himself and the fact that he was always the first player up off the field after a tackle. Payton set the standard for every running back to follow in his immense footsteps. However, as I said in my opening sentence – there will never be another “Sweetness.”You can say whatever you like. For me, these five running backs were able to spin, juke, overpower, bulldoze and almost magically make would-be tacklers grab nothing but air as they rushed themselves right into the NFL Hall of Fame and into my top five of all-time. 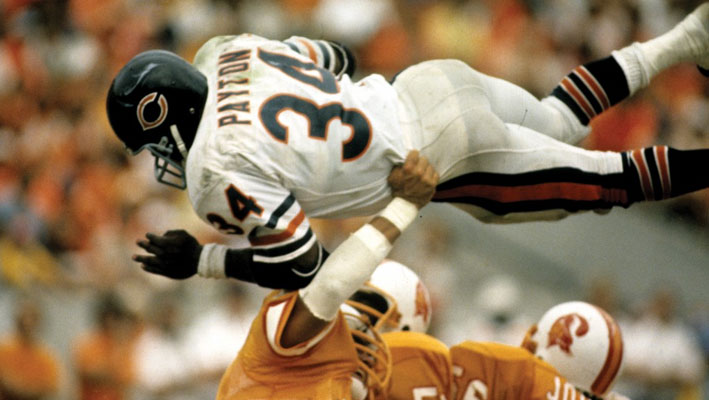 White retired in 1988 (also the last season on the sidelines for original Cowboys coach Tom Landry), having played 209 games in 14 seasons while only missing just one game during that span. At the time of his retirement, White had played in the second most games of any Dallas Cowboy in franchise history. During those 14 years, he played in three Super Bowls, six NFC Championship Games while accumulating 1,104 tackles (701 solo) and 111 sacks. White was elected to the Pro Football Hall of Fame in 1994.My Pick: I remember both of these players like it was yesterday (Yes…I am that old) and while both were outstanding disruptive forces along the defensive line, but the fact of the matter is that ‘Mean’ Joe Greene was an absolute freak of nature physically.Greene stood 6-4 and weighed 275 pounds, but the fact of the matter is that he had the cat-like quickness of an elite running back – and the power to overwhelm the biggest 300-pounder anywhere.While Randy White’s Hall of Fame career clearly speaks for itself, White simply couldn’t take on two – and sometimes three – offensive lineman at once – and still win that battle as Greene often did.Pittsburgh’s Hall of Fame defensive tackle was also known for being one of the most cerebral players around. I fully believe that Greene’s reputation preceded him to the point where he psychologically beat up several opponents before they ever stepped foot on the playing field.For me, I’ve got to give the edge in this player-versus-player comparison column to “Mean Joe” Green.The Pick: “Mean Joe” Green Sources:Si.com: http://www.si.com/nba/2015/06/10/lebron-james-bow-jim-brown-reactionPro-football-reference.com: http://www.pro-football-reference.com/players/P/PaytWa00.htm
Older post
Newer post