NFL News and Rumors
Are you an NFL betting aficionado that is in need of some fun-filled NFL news in order to help you pass along the time that is the NFL offseason?Do you feel like you’re going to die if you don’t get a pass, run, punt, kick, sack, fumble or interception in a city near you very soon? Well, if you answered ‘Yes’ to either of the aforementioned questions or you’re simply chomping at the bit for the start of the 2014 NFL preseason, then you’re going to love this mybookie.ag NFL offseason betting break original. In an effort to help our football faithful pass the time this offseason, I’ve come up with a fun-filled list of the top five head coaches in NFL history. Counting backwards from the No. 5 spot, let’s get started with my favorite head coach of all-time. 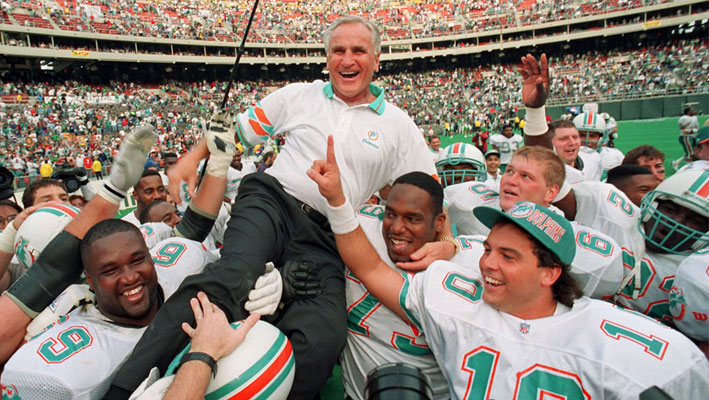 The legendary Don Shula compiled a historic 347-173-6 record in a career that spanned a whopping 33 years. Shula coached the Baltimore Colts from 1963 to 1969 and the Miami Dolphins from 1970 to 1995 and retired as the most successful head coach in NFL history.Of all the NFL coaches to have walked the sidelines for their respective teams throughout the annals of league history, only Shula and the immortal George Halas ever reached the 300-win plateau.Under Shula, the Colts enjoyed seven consecutive winning seasons and in 26 years leading the Dolphins, Miami experienced just two losing seasons. Shula’s teams reached the postseason 20 times in 33 years and his teams won at least 10 regular season games 21 times. Shula also holds the NFL record for having coached in six Super Bowls although his teams won only two of their title tilts.In Super Bowl VII, the 1972 Dolphins a perfect 17-0 campaign that remains the only perfect season in NFL history. Shula’s Dolphins backed up that championship-winning season by defeating the Minnesota Vikings in Super Bowl VIII to culminate a two-season span that saw the Dolphins win an insane 32 of their 34 games. Make no mistake about it NFL boys and girls; Don Shula is undoubtedly one of the top five head coaches in NFL history. 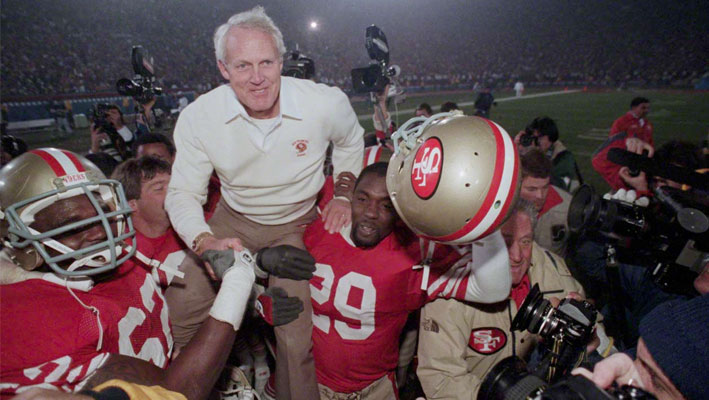 Bill Walsh may have been an ancient 47-years-old when got his first job as the head coach of the San Francisco 49ers in 1979, but it didn’t take the creator of the “West Coast Offense” long to show the world that he was a legend in the making.The 49ers were in the midst of some tough times in the 70s, winning a pitiful 31 of their previous 86 games, including their dismal 2-14 mark in 1978 before hiring Walsh. While Niners’ ownership and front office brass were simply looking for someone just to get the franchise back to respectability, what they found was a certifiable genius that was way ahead of his time in the likable leader. Walsh led San Francisco to their first Super Bowl title in just three seasons and would spawn a legion of head coaches that would follow in his footsteps decades later.In his 10 seasons as head coach of the 49ers, Walsh compiled an impressive 102-63-1 record that included an amazing 10 wins in 14 postseason games.The 49ers won six NFC Western Division championships while winning the conference crown in 1981, 1984, and 1988. Those NFC titles were followed with victories in Super Bowls XVI, XIX, and XXIII.In seven of Walsh’s last eight seasons, the 49ers won 10 or more games and appeared in the NFC playoffs every season. Walsh was named the NFL Coach of the Year in 1981 and NFC Coach of the Year in 1984.Records aside, for me, Bill Walsh creating an entirely new offense that is used in many forms three decades after he coached his last game, says enough about him to make him arguably the greatest offensive minds the game has ever seen in any era – and one of the top five coaches in NFL history. Just think people, Walsh’s innovative thinking has changed the way offense is played, not just in the NFL, but really, at all levels of football today. 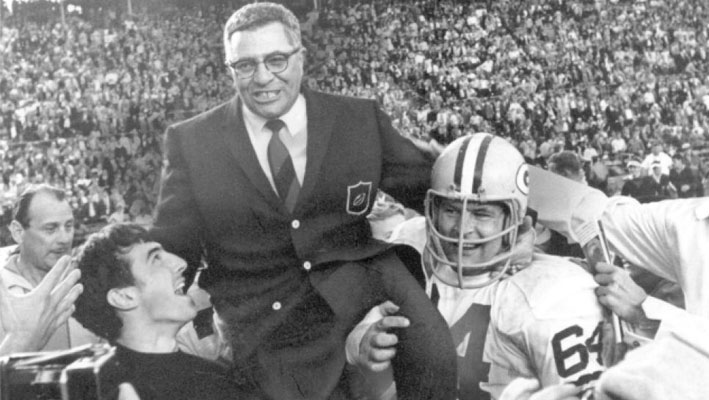 When I first began thinking of the names that would go on this list, I immediately thought about Vince Lombardi, a coach whose name is so synonymous with football coaching excellence that the NFL named its championship trophy after the late legend.Most people remember Lombardi as the mastermind behind several powerful Green Bay Packers teams of the 1960s, however, it should be known that the season before Lombardi was hired, the Packers recorded an atrocious 1-10-1 record.Lombardi insisted on a five-year deal when Green Bay ownership approached him about filling their head coaching vacancy and immediately changed the culture of the downtrodden franchise at his very first team meeting when he proclaimed, “I have never been on a losing team, gentlemen, and I do not intend to start now!” Needless to say, the Packers improved immediately under Lombardi, going 7-5 in his first season in 1959.The next eight years, the Packers were the best team in all of professional football as they bagged a whopping six divisional and five NFL championships, including victories in Super Bowls I and II.Although Lombardi’s life and career were cut short as he succumbed to cancer only a decade after leading the Packers to their last league title, his legacy as one of the greatest head coaches in NFL history (and the very best in the eyes of many) is firmly set in granite – and one that will never be forgotten.DYK Moment!Did You Know that legendary Green Bay Packers head coach Vince Lombardi coached the Washington Redskins in his final season as an NFL head coach? 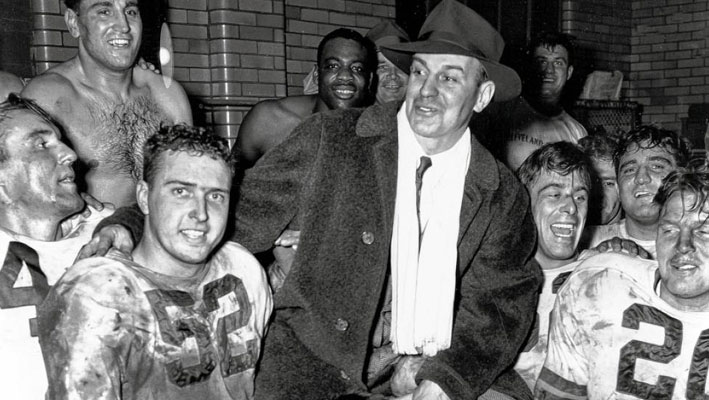 I have absolutely no doubt whatsoever that, if polled, every current NFL coach – and the vest majority of college coaches as well, would select Paul Brown to be on their “top five” list of greatest coaches of all-time…that’s just how significant Brown’s contributions to the sport of football once were.Brown, perhaps more than any other person, is responsible for helping turn NFL coaching into the ‘exact science’ that it is today. You see NFL betting buffs, when Brown organized the Cleveland Browns in what was then, a new All-America Football Conference in 1946, he started doing things no other pro coach had tried up to that point.When Brown was given his first pro assignment with his new, Cleveland-based team, he immediately hired a full-time staff on a year-round basis and instituted a system for scouting college players on a level that had never before imagined before by other professional teams and their front office personnel.Brown was the first coach to ever use intelligence tests as a hint to a player’s learning potential while also employing original ideas in which he use notebooks and classroom teaching techniques extensively. Brown was also the first head coach to use complete film clip statistical studies and initiated the now commonplace practice of grading his own players based on film study.DYK Moment 2!Did You Know that Paul Brown was the first coach to ever to keep his players together at a hotel the night before both, home – and away – games?From a strategic standpoint, Brown started the practice of calling plays from the sideline by utilizing alternating guards as messengers. He also developed detailed pass patterns for offense and then, incredibly, devoted his efforts to perfecting the kind of defense that could counteract a patterned passing attack.Simply put, Brown built a pro football dynasty in Cleveland during his now legendary tenure. The founder of the Browns posted an insane 167-53-8 record that included four AAFC titles, three NFL crowns and just one losing season in 17 years.In the four seasons the Browns operated in the AAFC, they lost just four games. When Cleveland joined the NFL in 1950, they continued their winning ways by playing in the next six championship games and winning the title in 1950, 1954, and 1955.I know it seems like a long time ago for today’s win-starved Browns fans, but, were it not for Paul Brown’s contributions to the sport of football, who knows how advanced the game would be right now.Other head coaches may be remembered or even admired more than Paul Brown, but I say there’s only one other head coach in league history that was better than Brown, making him my second greatest NFL head coach ever! 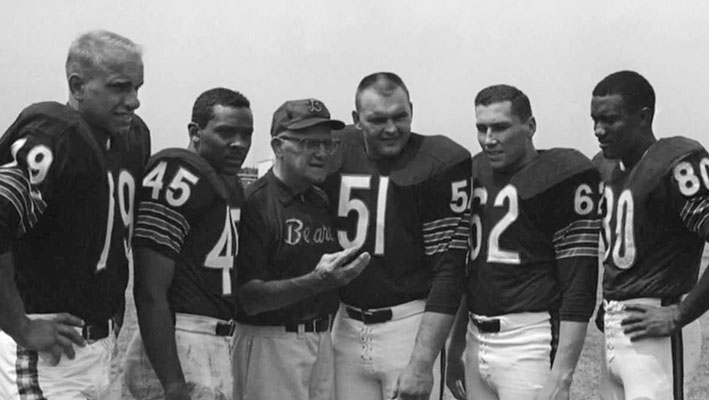 I have no doubt whatsoever that the legendary George Halas is the greatest head coach in NFL history!Halas was associated with the Chicago Bears and the National Football League from the time of their inception in 1920 until his death in 1983 and is undeniably one of the most beloved men in the annals of NFL history.DYK Moment 3!Did You Know that, in addition to his legendary coaching career, George ‘Papa Bear’ Halas was an owner, manager, player, and promoter?While Halas wore many hats during his incomparable Hall of Fame career, it was as a head coach that he was best known for. Although Halas coached his Chicago Bears for an unbelievable 40 seasons and amazingly, stepped away from the coaching ranks three times (1930-1932, 1942-1945 and 1956-1957), each time a rejuvenated Halas returned to the sidelines to coach, he ended up winning an NFL championship.In 1934 and 1942, Halas’ teams had undefeated regular-season records. His 318 regular-season wins and 324 total victories were long-standing NFL records until broken by Don Shula in 1993 and his Chicago Bears teams won six NFL titles under his leadership. Halas’ Bears also won three other divisional titles and finished second another 15 times.DYK Moment 4!Did You Know that George Halas was the first coach to hold daily practice sessions, utilize films of opponents’ games for study and to have his team’s games broadcast on radio?Halas was also an “old school” teacher who didn’t tolerate disobedience and insubordination. Halas also perfected the T-formation and used its overwhelming force to propel the Bears to their stunning 73-0 NFL title win over Washington in the 1940 NFL Championship. That game very literally sent every other team in the league scurrying to copy Halas’ innovative offensive system.I don’t care how far back I had to go to make this selection. It’s a no-brainer that George ‘Papa Bear’ Halas is the greatest head coach in NFL history!Sources:Profootballhof.com: http://www.profootballhof.com/hof/member.aspx?PLAYER_ID=34Pro-football-reference.com: http://www.pro-football-reference.com/players/H/HalaGe20.htm
Older post
Newer post