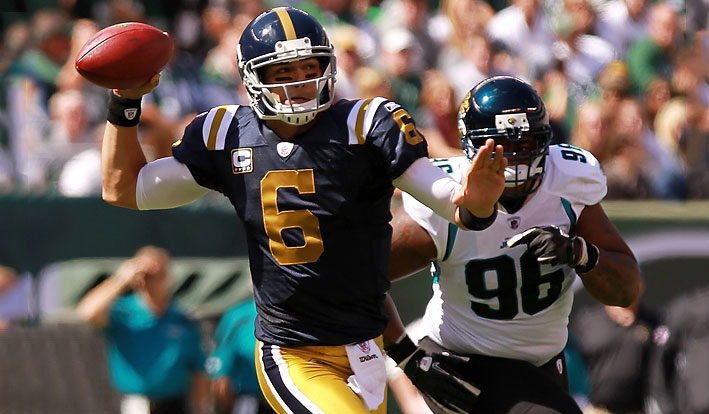 During the NFL’s 75th anniversary season, the New York Jets brought back the old Titans of New York jerseys that they wore in their AFL days, and it is easy to see why the team did away with those jerseys when they became the Jets. The players and coaches said they liked the uniforms, but the Jets fans made it known that they weren’t big fans. In the three years that the Jets wore the uniform in the 60s, they were 19-23, but the team has a winning record when they wear the throwbacks these days. 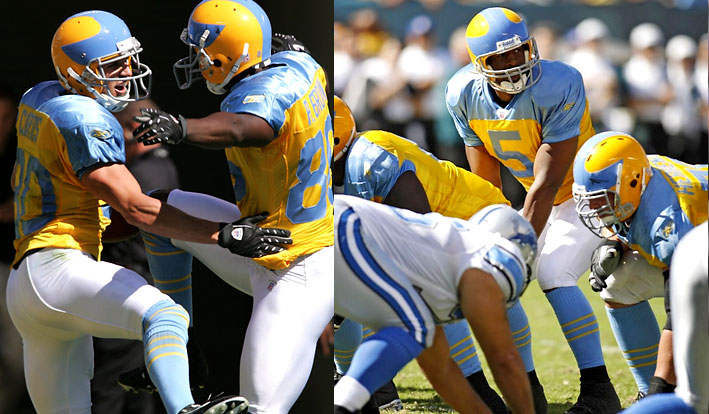 When Philadelphia was awarded an NFL franchise, they inherited the sky blue and light yellow uniforms worn by the Frankford Yellow Jackets. The Yellow Jackets were an independent football team that was allowed to be part of the NFL in 1924. Unlike some of the other teams with ugly uniforms, the Yellow Jackets actually won the NFL Championship in 1926. In 1931, the team would grow bankrupt, and the NFL would give Philadelphia the expansion Eagles in 1933. When the Eagles decided to wear the retro jerseys in 2007, they ended up scoring a season high 56 points, so they might want to consider wearing them on a regular basis, even if it offends the eyes. 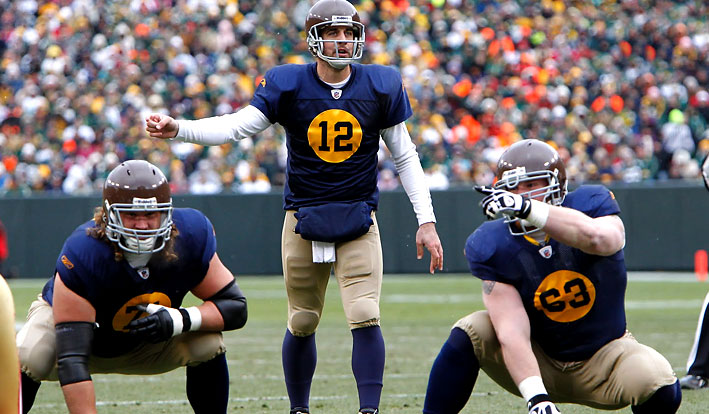 Back when they were still known as the Acme Packers, the team wore a uniform that consisted of a dark brown helmet, a navy blue jersey with a yellow circle in the middle with the player’s number, and tan pants. The uniform is a far cry from the green and yellow uniform that Packer fans know and love today. Back in the 30’s the Packers weren’t winning any championships, but they had a record of 30 consecutive home games without a loss, which was pretty impressive. When the team decided to bring back the jersey in 2010, they went on to win the Superbowl. 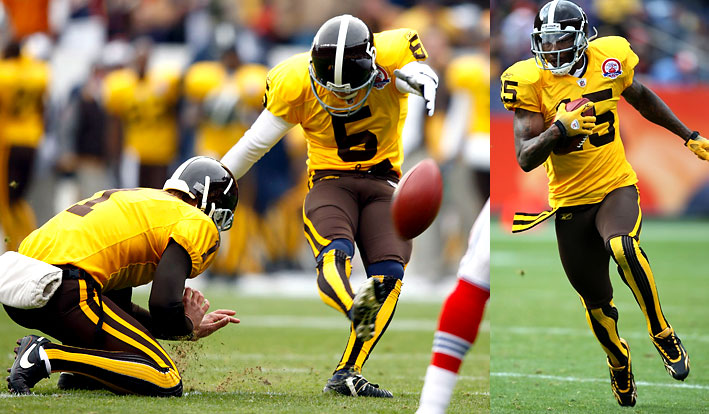 When you think of the Denver Broncos uniforms, you either think of the uniforms they wore in Elway’s glory days, or the current uniforms that they wear, but interestingly enough, Denver had a uniform that was similar to that of the Pittsburgh Steelers, the jerseys were “sunshine yellow,” and the helmets were dark brown, with the player’s numbers inscribed on them. The pants were also dark brown, with yellow stripes on the sides. The socks are really what make these uniforms really hideous, because they are striped in the team colors. At the time the team wore these jerseys, they were just getting started in the AFL, and were a mediocre team, but by the late 60s, they had switched uniforms to the popular “Orange Crush,” and became one of the best franchises in the NFL. 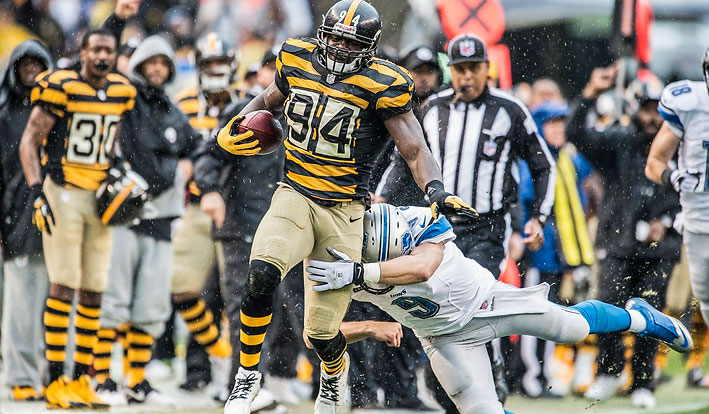 The Steelers have one of the most popular and most recognized jerseys in the NFL, but in the 1930s, when they were just starting out, the team wore striped black and gold jerseys, with tan pants, and striped black and gold socks. The uniforms have been dubbed their “Bumble Bee” throwbacks, and if you ever get a chance to see them in action, you will easily understand why the team decided to stop wearing them. Back then, the Steelers were known as the Pittsburgh Pirates, and they never finished a season above .500. 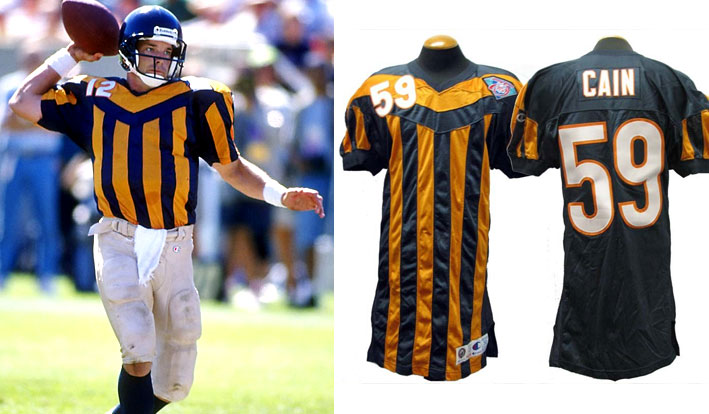 The Chicago Bears are known for having one of the coolest uniforms in the NFL, but in 1994, the team decided to wear their 1920’s throwback uniform for a few games. Today, the uniforms are still considered to be one of the worst in the history of the NFL, the front of the jersey was striped gold and blue, with the jersey numbers on the right shoulder. The back of the jersey actually looked better than the front, because it was similar to what the back of their jerseys look like today, with the exception of the blue and gold pattern on the sleeves. The Bears were actually successful in the 20s, and won the NFL championship in 1921, but the franchise wasn’t as lucky in 1994, and finished the season 9-7. 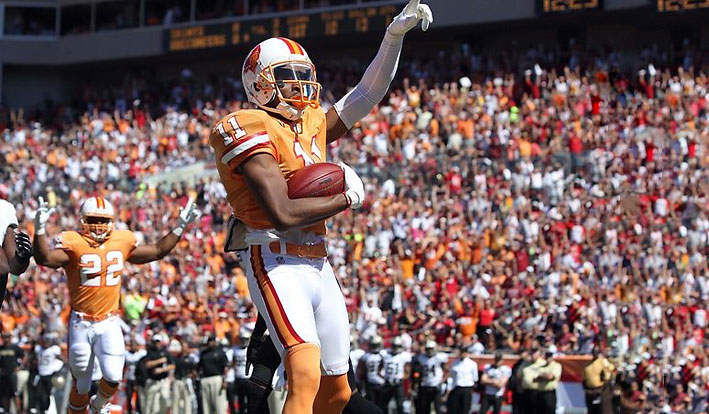 The Buccaneers may be the one team that won’t want to put on their old jerseys again, because the jerseys were one of the ugliest in NFL history, and they were also one of the worst franchises in the league when they wore them. During that span, their jerseys were called the “Creamsicle Jerseys,” because the colors were bright orange and white. During that era, the Buccaneers only managed to win 30% of the games they played, and at one point, they held the record for the worst season in NFL history, going 0-14 in 1976, a mark that the team held for over two decades. After changing their uniforms in 1997, the Buccaneers have gone on the win a Super Bowl, and were one of the best teams in the NFL during a 10 year stretch, which helped their fans forget about their terrible days. The team might need to change their uniforms again, because they have struggled for the last four years.The bottom line? There have been teams with ugly uniforms that have had success in the league, and teams with good looking uniforms that haven’t. A lot of teams get ridiculed for wearing ugly uniforms, but at the end of the day, as long as they keep winning, their fans really don’t care what they wear and neither do people placing bets.
Older post
Newer post