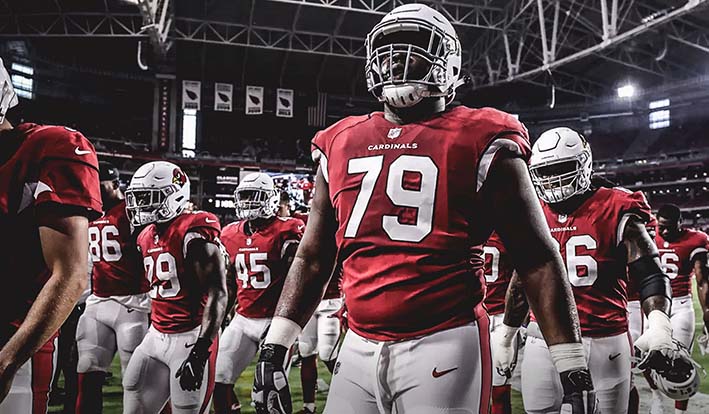 Round 1 for the 2019 NFL Draft is in the books. Few surprises took place in Round 1, leading to less drama than usual. However, there’s still a lot to go over because this is the NFL, right? Let’s get to it!

Arizona tried to fake out the rest of the NFL by saying they weren’t 100% sure on Heisman Trophy winning quarterback Kyler Murray. Yeah, right. The Cardinals pulled the trigger on Murry like it was nothing. They were so excited about drafting Murray that they didn’t even care that Josh Rosen, their number one pick from last season, is still on their team.

The Cardinals flubbed the whole trading Rosen thing. They should have tried to trade Josh as soon as they knew they were going to draft Murray. What’s the point of waiting around? If they had the second or third pick, it makes sense to wait and see. Not if you’ve got the first pick and plan on using it.

Now, the teams Arizona calls trying to unload Rosen have some leverage.

Nick Bosa going to San Francisco with the second pick, and the Jets drafting Quinnen Williams with pick 3 didn’t surprise. But the Raiders taking Clelin Ferrell with pick 4 sort of did. Oakland could have gone several ways here. They could have drafted down and get even more picks.

However, they went with a proven defensive end. The bigger question is why did they pass up on Kentucky linebacker Josh Allen, or LSU inside linebacker Devin White to take Ferrell? Sure, Ferrell’s proven, but nobody except the Raiders had him ahead of Allen and White.

The New York Giants lied to all of us

Giants’ GM Dave Gettleman had said all week that the Giant had too many holes to fill and were going to “draft the best available” player with the sixth pick. Right. Sure, Dave!

Not only did the Giants not draft the best available player, they might not have taken the best quarterback available. New York drafted Duke signal-caller Daniel Jones. Jones had made a move up draft boards earlier this week, but he wasn’t rated ahead of Ohio State’s Dwayne Haskins or even Missouri quarterback Drew Lock.

Almost as strange? A ton of great players sat on the board when the Giants drafted, including Josh Allen, which means the Giants took a quarterback with the sixth pick instead of drafting the player that most resembles Kahlil Mack.

The Jaguars jumped for joy when Josh Allen landed on their laps. The Jags chose seventh and there was Josh Allen, a player that recorded 31.5 sacks in 42 college games played. That was the biggest steal in Round 1. The other steal is Buffalo drafting Houston defensive tackle Ed Oliver.

Both Allen and Oliver could have hall-of-fame careers if they stay healthy. Both teams also immensely improved already really good defenses, making them both playoff contenders.

Bengals and Dolphins passed on quarterbacks, but Washington didn’t

The Cincinnati Bengals and Miami Dolphins passed up on taking quarterbacks. The Washington Redskins didn’t when they drafted Dwayne Haskins with the fifteenth pick. Haskins immediately stated that every team that passed up on him will be sorry.

Although Josh Rosen said the same thing last year and it didn’t pan out for him, there might be a reason to believe Haskins. He’s landing in a spot where he’ll no doubt succeed. Jay Gruden is great at developing quarterbacks while Washington has a really good offensive line. Washington drafting Haskins might be the third steal that happened on Thursday night.

That’s it for the first round. Check out the rest of the NFL Draft on Friday and Saturday, and enjoy the weekend!