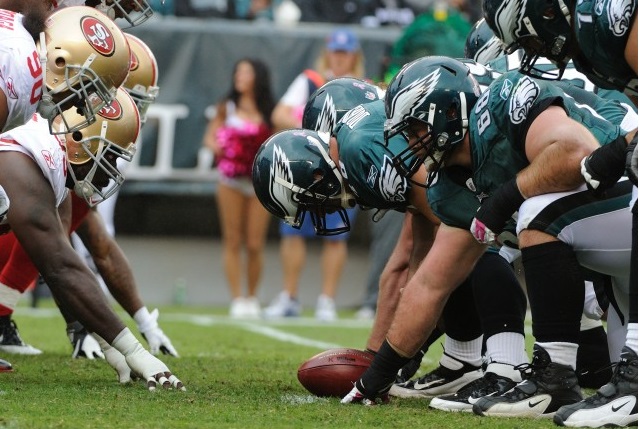 NFL News and Rumors
The NFL Week 4 is about to bring us with an intriguing game featuring two opposed teams: Eagles and Niners. This is expected to be a tight game and will have plenty of scoring that will make it go past its point total, making it an attractive pick for bettor looking for NFL over under lines. The Philadelphia Eagles have won their first three games and look as one of the best teams so far this season. They have been dominant in the second half, outscoring opponents 74-24 after halftime. Meanwhile the San Francisco 49ers have struggled to be competitive and have only one win so far this year, losing back to back games against Chicago and Arizona. The two sides will be competing on this coming Sunday afternoon at Levi’s Stadium in Santa Clara.

Looking At the Eagles

The Philadelphia Eagles have a strong record so far as they have scored at least thirty points in each of their games this year (33.7 to be more exact). The team has the second-best passing game in the NFL as Nick Foles already has 978 passing yards and six touchdowns. However, the Eagles have struggled to keep the passing games of their defenses in check. They have given up about 280 passing yards per game this year. This is the third-worst total in the NFL.

A Review of the 49ers

The San Francisco 49ers lost large leads to Chicago and Arizona in the last two weeks. The Niners have especially collapsed in the second halves of their games as they have been outscored 52-3 in this part of the game so far this season. In addition, quarterback Colin Kaepernick has struggled with three interceptions versus four touchdowns this year. Defensive lineman Justin Smith has been productive though as he has three sacks so far this year.

This game will feature two teams with dynamic quarterbacks. Considering the passing offense and defense of the Eagles, this may end up being a very strong game from the air. However, one concern to watch for involves how well the teams will play on the grass surface at Levi’s Stadium. The stadium has developed some serious concerns in its extremely young history with regards to how the grass surface is being managed. This is an important point that might have to be explored with regards to what could happen as the game goes along.

As good as the Eagles’ passing game is, the two-way attack from Colin Kaepernick should keep the Eagles defense on its feet. Still, the Eagles have more offensive options with Jeremy Maclin and Zach Ertz being strong on the field while Darren Sproles has become a two-way target as well. This will probably be a high-scoring game but it should be enough for the Eagles to win.  This means that the game will go past the spread. The 49ers are -5 favorites to win this game. Meanwhile, the over/under of 50.5 points will be easily surpassed. These are interesting spreads and totals to see that should really create a rather interesting point to explore.

This is a game that should be a real barn-burner from an offensive standpoint. The proficient passing game of the Eagles will shine while the Niners may come out of a slump and even score more in the second half. Still, all the momentum for this game is clearly on the Eagles’ side, thus making for a game where the Eagles are expected to be the clear favorites to win here regardless of what the official NFL betting line for the game says.
Older post
Newer post