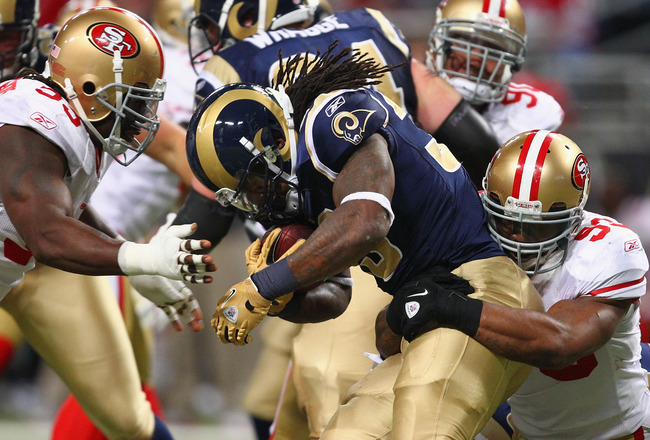 NFL News and Rumors
Still early in the 2014 pro football season, but after 6 weeks of action the St. Louis Rams are facing a tough situation in the NFC West. After back to back losses to Dallas and Philadelphia on Week 3 and Week 5, the team is starting to run out of time, and the worst part is that their NFL betting lines don’t seem to improve. At 1-3, the Rams are last in the NFC West division, where the defending NFL champ, the Seattle Seahawks are tied atop with the 3-1 Arizona Cardinals. The 49ers, St. Louis’ rival for this coming MNF game, are ahead of the Rams at 3-2.Now the Rams head back home with one goal in mind: beat the San Francisco 49ers on Monday Night. Losing at home can be potentially disastrous for St. Louis, not only because they are about to enter the toughest stage of their schedule with games against Seattle, Kansas and San Francisco, but also because the team already suffered two of the worst reverses in the 2014 season at their home stadium. In the season opener, the Rams lost by 28 points (34-6) to the Minnesota Vikings. Two weeks later, they blew a 21-0 lead and ended up losing 34-31 to the Dallas Cowboys.

For the 49ers, this game has a different meaning, but a victory against a divisional will help the team to improve its postseason chances and keep their momentum after vital wins against the Philadelphia Eagles and Kansas City Chiefs.San Francisco opened the season in great fashion, delivering a setback to the Dallas Cowboys in Arlington, TX, but two consecutive losses to Chicago and Arizona put their postseason plans in peril, brought many questions around Colin Rand Kaepernick’s ability as offensive leader and put head coach Jim Harbaugh against the wall.

The 49ers will put their No.3 ranked running offense against St. Louis’ No.29 run defense. Perhaps that does not say much to you, but the numbers the Niners offense have put so far this season is something that St. Louis defense should worry about. Niners running back Frank Gore leads the team with 365 rushing yards, but Colin Kaepernick adds another 205 yards on the ground, along with Carlos Hyde’s 132 yards.The Rams need to contain San Francisco’s ground offensive if they want to keep their chances alive. The times that Kaepernick has been forced to pass the ball, the 49ers have found themselves on the losing end. Kaepernick is averaging 35.5 passing attempts in the two reverses recorded this season, and 26.2 attempts in their victories. So limiting Kaepernick’s air offense shouldn’t be a problem for a team that sports the top passing defense in the league, allowing just 192.3 yards per game.Game Odds:49ERS: -3-125, OV 43 ½ -110, ML -175RAMS: +3+105, UN 43 ½ -110, ML +155The 49ers lead the all-time series against St. Louis by a slight margin, 63-62-3.On Monday Nigh matches. the Niners have been a more successful team, compiling a 45-25 mark. St. Louis, on the other hand, is only 26-30 on MNF games.The last time these two squads met in prime time was in last season’s Thursday Night Football. The Niners’ beat St. Louis 13-23 on December 1, 2013 at Candlestick Park. Considering that San Francisco had seriously improved its game since week 2, the 3-point football spread comes as a surprise. Now, with the exception of the season opening loss to Minnesota, all Rams’ losses came by 6 or less points, so odd-makers are expecting a tight and close game. Although, the Niners are in capacity of beating the Rams at home, so expect a victory by Kaepernick and Co. on Monday Night.
Older post
Newer post