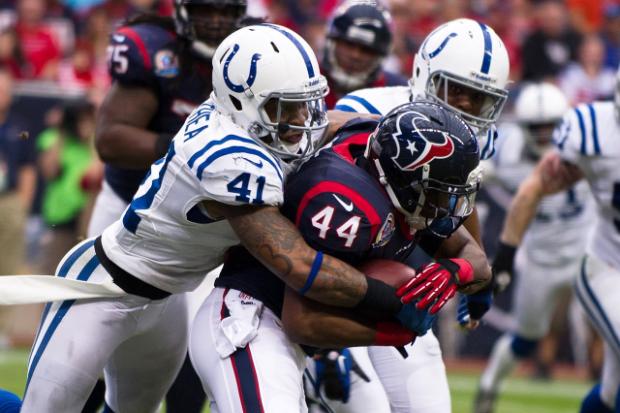 NFL News and Rumors
Although the 2014 NFL campaign is far from ending, there has already been a lot action as the race for the AFC South narrows down to two teams. This coming Thursday, the Indianapolis Colts will square off against the Houston Texans in the first game of the NFL Week 6. Indianapolis had a slow start to the season, but now has a record of 3-2 winning their last three games in a row to keep the teams’ title hopes alive and puts the team ahead in the TNF betting odds. The Texans have also recorded  3-2 start, although the team has two losses in their last three games.

A win for any team would boost their momentum going to the remaining games. As the teams prepare to meet on Thursday, Oct. 9, 8:25 PM ET at the NRG Stadium, Houston, both squads know the game carries great importance and that a win would catapult either of them to the top the AFC South Division. The Colts have shown a splendid improvement in their last three games despite losing their first two opening matches of the season. They enjoyed a home win of 20-13 against Baltimore Ravens last Sunday. This essentially puts the Colts at an inspiring 4-1 ATS. A great performance from the Colts QB Andrew Luck, will motivate the Colts to victory. Luck, who had a 312 yards throw and four turnovers in last week’s win, is having the time of his life. He became the only player in NFL history to throw for at least 370 yards, complete at least 70% of his passes, throw four or more TD’s and have one or no interceptions in consecutive matches. Indianapolis’ defense against the Ravens enjoyed its best game of the season limiting their opponents to a season-low 13 points on a total 287yards. The team further recorded 117 rush yards against a tough Baltimore front seven. Moreover, Luck is leading in NFL’s passing offense with 1,617 throw yards and 14 touchdowns, which is quite remarkable. Additionally, he is ranked seventh in passer ratings and completion percentages, making one of the best ball-movers in the NFL. Indianapolis did not display tremendous running attacks in their previous games with Philadelphia, Jacksonville and Denver. If they are to contain Texans, they must up their game against Houston’s tough running back Arian Foster. The Colts have secured great leads this season in their last four games outscoring their opponents 73-19 in the first half. Game Odds: COLTS: -2½-120, OV 46 ½, ML -110 TEXANS: +2½EV, UN 46 ½, ML -110 The Texans are expected to play well and create more chances since the experienced Foster who missed out some of the games this season will be available. Even though Foster is ranked fifth in the NFL carries, his workload worries some of his fans. On Sunday’s game against the Cowboys, Foster only managed 157 rushing yards and 2 touchdowns. Foster will decide the Texans’ winning chances against the Colts if he concentrates and exploits the chances he gets. Houston’s defense has to be more tactful this time to prevent Luck and the Colts from scoring. Although the Texans are so far successful in holding their opponents to an average of just 17 points per game, they must add more creativity to their offense in order for them to win. The Texans are good at forcing turnovers, thus the Colts must be alert and work on minimizing their opponent’s extra possession that could easily make them win the game. Who’s the overall favorite? The 2.5-point NFL betting spread should be an inconvenience for Indianapolis, who will try to lock the victory in early instances of the game. So expect the Colts to take this by at least 7 points.
Older post
Newer post