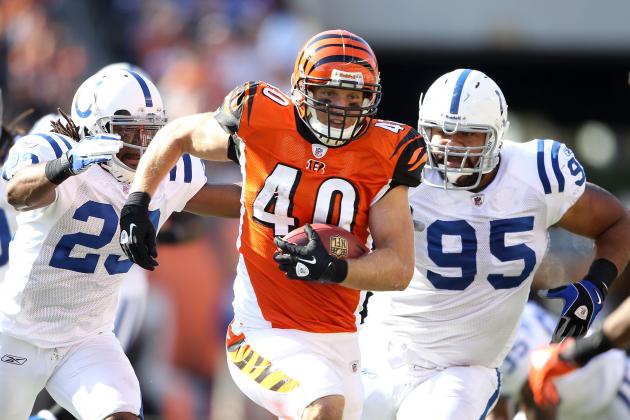 NFL News and Rumors
Any good team needs a solid collection of talent to win on a regular basis, although some have found a way to get by with just one or two stand out players in the line-up. Two teams that have shown that to be true this season are the Cincinnati Bengals and Indianapolis Colts. Sure, their fans will argue that they have a decent talent pool on each squad, but if you take either A.J. Green or Andrew Luck out of the line-up, the result would be disastrous for any of them. Both squads square off this Sunday afternoon, so here are the NFL lines, game overview and prediction for this match.

Despite being praised as one of the best teams this season, the Bengals have been showing signs of struggle after starting the season at 3-0. Cincinnati was considered to be a prohibitive favorite to represent the AFC  when the season started, and they certainly came out of the gate looking that way. Then came the toe injury to A.J. Green, at which point the Bengals didn’t look quite so unbeatable. They followed three straight wins with a blowout loss to the Patriots and a tie last week against the Carolina Panthers. Green is listed as doubtful for this weekend, but even if he does play, you have to wonder how effective he will be.The Colts are a team that goes as well as their QB does, which seems to be a role that Andrew Luck has taken a shine to. After all, what QB in this league does not want to be considered the man? It was a rocky start for the Colts, losing their first two games of the season, but they have rattled off 4 straight wins, putting up big numbers and looking very impressive in the process. The most impressive of all are the numbers Andy Luck is putting up, as he has crossed the 300-yard passing threshold in all but one game this season, and has actually come within a completion or two of 400 in a pair of games.

This has all the makings of being a closely fought, high scoring affair. The Colts have been installed as a 3-point home favorite, which is fair considering this could be a game that hinges on who gets the ball last. Going back to 1992, the Colts have a pretty impressive 6-2 SU record against the Bengals in games played at home. The recent trend has been on the OVER, which is set at 50 points for this game.Game Odds:BENGALS: +3-105, OV 50 -110, ML +150COLTS: -3-115, UN 50 -110, ML -170The NFL odds for this game are tight. I do like the Colts straight up, but as mentioned earlier, this could very well be a field goal game, which is why I am steering clear of the spread. The Colts have seen 5 of their 6 games this season go OVER the point total, while Cincinnati has seen their last two games also go OVER. That is the play that I like here, which is why my money will be on the OVER.
Older post
Newer post