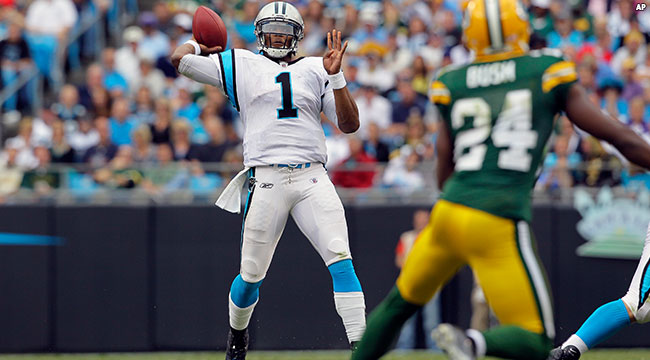 NFL News and Rumors
As the 3-2-1 Carolina Panthers are come into Week 7’s matchup against the 4-2 Green Bay Packers, both team will be expecting to get a victory that would better their divisional NFL standings. The Packers, who are tied at the top of the NFC North with the Detroit Lions, would not want to take anything less than a victory against the visitors. On the other side of the coin, Carolina’s team exploits have made them the outright leaders of the NFC South and staying on top of their division is similarly important. Going by great form both teams have exhibited recently, an entertaining match is anticipated from both sides. So let’s review the NFL betting odds, game overview and other info heading to this game.

Match Preview And Betting Analysis Following the 37-37 tie against Cincinnati last week, the future looks brighter for Carolina as their starting QB Cam Newton is in his dazzling-best form. Newton was amazing last Sunday comfortably completing 29 of 46 passes for 284 yards with two TDS. Newton also rushed for 107 yards with a TD on 17 carries against Cincinnati after running 14 times for 42 yards in his last five games this season.Newton’s presence in Carolina’s squad against the Packers will be a boost to the team’s offense which is ranked 20th in the league. Against the Bengals, the Panthers recorded 431 yards in total offense. The game went back and forth, but was eventually tied after Mike Nugent failed a 36-yard field goal for Carolina. If the Panthers continue with their upward trend in the offensive play, they could intimidate the Packers’ defense and create more scoring opportunities.Game Odds:PANTHERS: +6½-110, OV 49 ½ -110, ML +235PACKERS: -6½-110, UN 49 ½ -110, ML -275But as a word of caution, Carolina’s defense should not allow many points as they did against the Bengals. When playing against an experienced Packers’ QB such as Aaron Rodgers, any small mistakes are usually exploited mercilessly. In this regard, the Panthers must ensure they make good use of their ball possession while stopping the Packers runners and receivers from running and moving the ball freely.The Packers are going into this game with confidence after a 27-24 victory over the tough Miami Dolphins, extending their winning streak to three games. Rodgers completed three TD passes one of which led to their closing minute victory. More importantly, the Green Bay QB completed 24 of 42 passes for 264 yards with no picks in that victory. With such a good record, the Panthers must strive to tackle and intercept his plays, as this is the only way they can limit his efficiency.In spite of Rodgers’ influence, the Packers have been somewhat struggling to get a consistent working formula for their offense as a group. With a little improvement in the team’s joint offensive play, the Packers could frustrate the visitors’ defense and help them score more points.Game PredictionCarolina is 2-4 ATS in its last 6 games on the road while Green Bay is 1-5-2 ATS in its last 8 games at home. Evidently, none of the teams has a superior record, so they game could play out anyhow. The Packers at at home and are football betting favorites by 6.5 points, but since the game will eventually come down to the Newton versus Rodgers duel,  I see Rodgers winning the contest and leading his team to victory.
Older post
Newer post