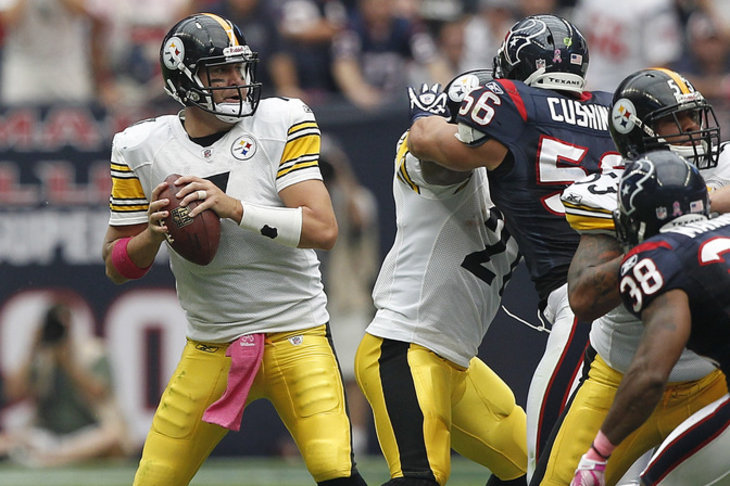 NFL News and Rumors
When they visit the Pittsburgh Steelers on this week’s Monday Night Football betting match, the Houston Texans will be seeking to change their ominous 10-game SU losing streak as road underdogs. Both the Texans and Steelers are identically 3-3 after six weeks of action. The winner of the upcoming game will therefore have an opportunity to climb up the ranks in the AFC standings. With the match set to take place on Oct. 20 at 8:25 PM in the Heinz Field, Pittsburgh, which of these two teams look strongest to win the Monday tie-breaker?

Betting on the Texans

After starting the season somewhat brightly, the Texans have been fading slowly, following their two consecutive losses to the Indianapolis Colts and Dallas Cowboys. Though the losses may be pardonable because the Colts and Cowboys have been in greater form than the Texans, it has to be said that Houston defense must find ways of not giving up too many yards to their opponents. Allowing an average of 397 yards per game is simply inexcusable in an elitist league like the NFL.As a glimmer of hope for this underwhelming defense, No.1 overall pick Jadeveon Clowney may return to the squad after being sidelined for some time due to a knee injury. Clowney is quite good at a pass rush defense and his return may orient a revolution in the defense.Offensively, the Texans boast of the inspired services of running back Arian Foster. Over the past two games, Foster has spearheaded an offense that has had four TDs and run for 312 yards, despite losing both games. Another inspiring performance from this running back should inject some pace and decisiveness in Houston’s offense. This can greatly boost their chances of getting a win in Monday’s game.

Betting on the Steelers

The Pittsburgh team is 2-4 ATS against the spread this season. More favorably, the Steelers are 6-2 SU in eight home games and 6-3 SU in their last nine games. With such records, a motivated Pittsburgh should be able to add another home win to their statistics.An alternating trend of wins and losses has, so far, prevented the Steelers from giving a clear picture of their potential. Even more worryingly, this inconsistency has seemingly crept onto QB Ben Roethlisberger who has been shiftily hot and cold. After being impressive against Carolina and Tampa Bay in Week 3 and 4, Roethlisberger was comparably poor against Jacksonville and even poorer in last week’s game against Cleveland. If some improvement is to be seen in Monday’s game, it has to start with Big Ben.In defense, an injury-plagued roster has been the Steelers’ main problem. How the coach will line up his players at the back remains to be seen. But in the meantime, I have two words of advice to the people who’ll be playing at the defense—Arian Foster! Yes, Arian Foster is my advice. Let the defenders do everything to tackle him, close him down, halt his runs…, I mean virtually anything it would take to stop him. Most of the scoring plays by the Texans start, continue, or finish with Foster’s involvement, so limiting his services will be extremely important in limiting Houston’s overall efficiency as a team.Notably, the all-purpose Le’Veon Bell and receiver Antonio Brown have been quite formidable for the Steelers, especially in the absence of Roethlisberger’s occasional uplifting performances. If both players continue with their laudable contributions, then Roethlisberger wakes up from his slumber, a win would definitely come for the Steelers when they play on Monday.

Game Odds:TEXANS: +3½-115, OV 44 ½ -110, ML +155STEELERS: -3½-105, UN 44 ½ -110, ML -170Monday’s football betting match is the first of a three-game run at home for Pittsburgh and must win game for Pittsburgh. At 3-3, both Steelers and Texans are trying to catch up with teams ahead of them, so the Texans are likely to put some pressure on their rival . However, the Steelers are at home and are also stronger than the Texans, so the edge is on Pittsbugh to win this game and cover the 3.5 spread.
Older post
Newer post