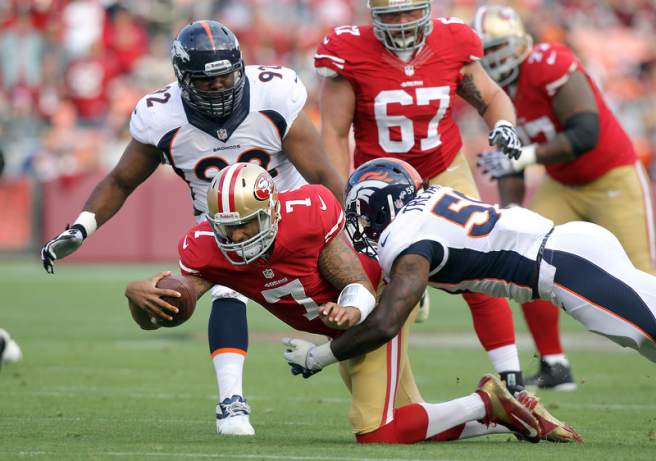 NFL News and Rumors
This coming Sunday, the 4-2 San Francisco 49ers will be on the road to face off the 4-1 Denver Broncos in a tantalizing action-packed NFL contest. Despite starting slow to the season, San Francisco is hoping to extend its 7-2 SU record in the last 9 games on the road when they play the Broncos this weekend. Meanwhile, Denver will want to grab this opportunity and improve their 2-5 ATS record in the last 7 home games and solidify their status as a top football betting favorite.Key Matchup DetailsGame: San Francisco 49ers vs. Denver BroncosVenue: Sports Authority Field at Mile High, DenverDate: Sunday, October 19, 2014Time: 8:25PM ETGame Odds:49ERS: +7-115, OV 49 ½ -110, ML +250BRONCOS: -7-105, UN 49 ½ -110, ML -300

Betting on the 49ers

San Francisco’s Monday night 31-17 victory over the St. Louis Rams to go 5-2 this season will definitely boost the team’s morale going into the Sunday’s game against the Broncos. QB Colin Kaepernick showed his brilliant passing skills in the game throwing for 343 throw yards and recording three TDS with no interceptions.Even though Kaepernick may not record the same decent numbers in every game, he must find a way of consistently putting in decent throws and making more runs, especially against the Broncos defense that has done extremely well this season. In the previous game, San Francisco’s timely runs helped change the game’s course when they’d been trailing Rams. If the 49ers can start strong in the defense and strive to find early points for their team through its offensive player, they can succeed in limiting the attacking options of the Broncos who are good at making runs each time they get hold of the ball.

Betting on the Broncos

Following last game’s 31-17 win against the Jets, Denver is expected to confidently host the 49ers this Sunday while they enjoy the home ground support of their fans. When they played against the Jets, the Broncos CB Aqib Talib made an interception in the closing minute to beat the 9.5-point line. This superb play by Talib helped the visitors walk avoid a score that could have detrimentally altered the cause of the game. As a whole unit, Denver’s defense has been generally decent over the recent games. They outplayed the Cardinals allowing just 1.9 yards per carry while allowing 2.1 yards per carry against the jets. Another strong performance by Broncos should once again hold off the 49ers’ offensive plays.The Broncos’ QB Peyton Manning will have a chance to break Brett Favre’s all time TD pass record at home. For this reason, the 49ers defensive unit should be watchful of him. If not, they will a have difficult time protecting the ball from Manning who will certainly be extra-motivated by the thrill of breaking Favre’s record.

Here’s my insight for my fellow NFL betting fans, the 49ers will start strongly and settle faster in the game hoping to catch the Broncos off-guard and steal the game. But this won’t be probably possible because, as the game progresses, the Broncos will grow stronger and control most of the game’s pace and plays. And, with the home ground advantage and a record to be broken, a narrow victory is most likely for the hosts.
Older post
Newer post