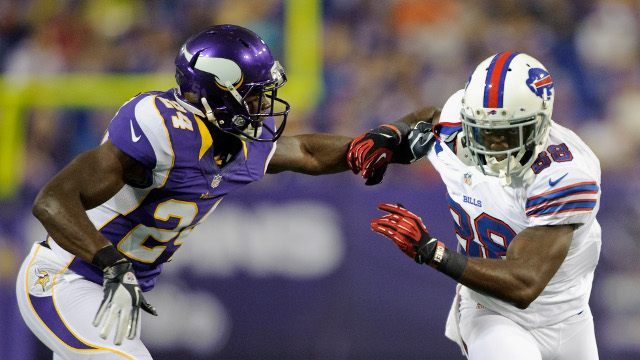 NFL News and Rumors
It is usually by this point in the season that we begin to develop a clear idea of what every team is about, and what we can expect from them the rest of the way. Two teams that seem to fall outside of that are the Minnesota Vikings and Buffalo Bills, which means their clash this weekend might help NFL gambling fans to get a better handle on each of them.
Sunday, October 19, 1:00 PM, Ralph Wilson Stadium, Orchard Park, New York
Part of the problem that the Vikings have had in trying to create an identity this season comes from seeing their player personnel take a hit. Losing your starting quarterback (Matt Cassel) and running back (Adrian Peterson) doesn’t help, but it becomes even worse when your highly-touted rookie QB Teddy Bridgewater also goes down with an injury in his first game as a starter. All of this makes their 2-4 record a little more understandable, and to be fair, they have also shown glimpses that they might actually be a decent ball club if all their major players were present and accounted for.If you want a team that is the model of inconsistency, look no further than the Buffalo Bills. They came charging out of the gate and knocked off the Bears and Dolphins in the opening 2 weeks. That was followed by a pair of losses to San Diego and Houston, after which they won one and then lost one. Buffalo are not a team that is going to run up the points on you, but they are capable of shutting down the opposition and keeping it close, which is basically what they have done all year.

The Vikings largest defeats this season have come on the road, which is enough to see the Bills listed as 5.5-point favorites for this one. The Vikings are 2-4 ATS so far, while the Bills are 3-3. Not much to go on there, but the OVER/UNDER tells a bit of a different tale, with 9 of the 12 combined games these two have played this season landing UNDER the total.Game Odds:VIKINGS: +5½-110, OV 42 ½ -110, ML +215BILLS: -5½-110, UN 42 ½ -110, ML -255I think that the home field advantage will be enough to see Buffalo through on this one, and they will likely do enough to barely cover that spread, so the NFL betting line does not really favor the Bills. I am not 100% confident of that, though, especially given that high level of inconsistency. It is for that reason that my money will be placed on the UNDER.
Older post
Newer post