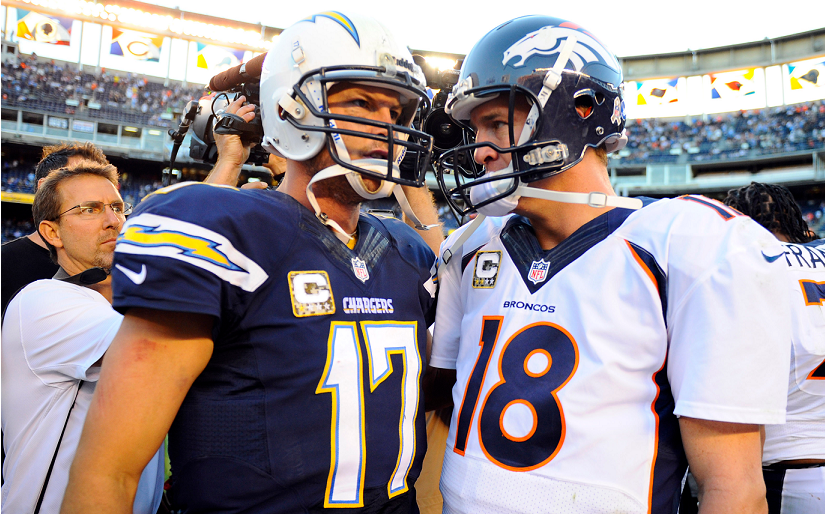 NFL News and Rumors
It’s been a bit of a funny old season in the NFL, with very few teams really making a mark in an authoritative manner. The Denver Broncos, guided by Peyton Manning, and Cowboys and Tony Romo look to be the cream of the crop at the moment. The Cowboys are on a six game streak, but you keep waiting for that Dallas bubble to burst, and for their season to come crashing down around them. Perhaps another week will make things a little clearer, so let’s take a look at three of the best match-ups and football betting lines for Week 8.

Thursday, October 23, 8:25 PM, Sports Authority Field at Mile High, Denver, ColoradoOne of the juiciest looking games of the week comes on Thursday night when the 5-2 San Diego Chargers travel to the Mile High City to take on the 5-1 Denver Broncos. The home team are sure to be on high after their dismantling of the San Francisco 49ers, in a game that saw Peyton Manning steal the all-time TD record from Brett Favre. The Chargers will be looking to bounce back after a less than stellar performance against the Kansas City Chiefs. I think what we can expect here is a high scoring affair that will hopefully not end in a blowout. The Broncos are a 7.5-point favorite.Game Odds:CHARGERS: +7½-115, OV 50 ½, ML-110BRONCOS: -7½-105, UN 50 ½, ML -110

Sunday, October 26, 1:00 PM, Paul Brown Stadium, Cincinnati, OhioThe Baltimore Ravens and Cincinnati Bengals are a pair of teams going in opposite directions, but the form book always gets thrown out the window whenever there is an AFC North match-up. The Bengals have been struggling offensively, thanks in large part to the toe injury currently being carried by their star receiver A.J. Green. The Ravens have ridden the great play of QB Joe Flacco and the smothering style of their defense to put together a very respectable 5-1 record. They have essentially flipped the script in the division, as most pundits believed that it would be the Bengals who would win, and who may also be the team to represent the AFC in the Super Bowl. The Bengals are a slight 1.5-point home favorite.Game Odds:RAVENS: +1-110, OV 46 -110BENGALS: -1-110, UN 46 -110

Sunday, October 26, 4:05 PM, University of Phoenix Stadium, Glendale, ArizonaThe 5-1 Arizona Cardinals are getting their wins by playing some incredible defense. No-one has been able to run the ball on them yet, and they have only given up more than 20 points in a game once this season, which was a 20-41 loss to the Denver Broncos. They are essentially the complete opposite of their opponents this coming weekend, the 5-1 Philadelphia Eagles. They play a fast, exciting brand of offensive football that is always easy on the eye. It is going to be very interesting to see how they fare against that awesome Cards defense. The Cardinals come into this one as a slight 2.5-point home favorite.Game Odds:EAGLES: +2½EV, OV 48 -110CARDINALS: -2½-120, UN 48 -110
Older post
Newer post