NFL News and Rumors
When the online betting calendar turned over to 2015, Jim Tomsula was a defensive line coach. A few weeks later, he was one of the 32 head coaches in the National Football League. His first interview with the CSN Bay Area network was one of the more awkward conversations in recent memory on television, as he kept pausing, muttering, contradicting himself and simply failing to answer questions. Tonsula made a sharp contrast with Jim Harbaugh, who was much more at ease with the press. It looked, to all observers, that the San Francisco 49ers were so glad to have gotten rid of the egotistical Jim Harbaugh that they had replaced him with an unvarnished assistant who would simply do the bidding of the front office.

Injury updates and more from Jim Tomsula before the first padded practice of #C4M9: http://t.co/p34QckzsZp. pic.twitter.com/NkCFL5r93p

Then, San Francisco’s players started leaving. In March it was linebacker Patrick Willis who retired. His apparent replacement, Chris Borland, retired a week later – at the age of 24. A couple months later, Justin Smith retired after 14 years in the league, leaving a big hole on the defensive line. A month after that, offensive tackle Anthony Davis retired at the age of 25. Running back Frank Gore – the 49ers’ all-time leading rusher – headed to Indianapolis as a free agent. Guard Mike Iupati and wide receiver Michael Crabtree all took free-agent deals elsewhere too. Rumors started swirling that quarterback Colin Kaepernick might be traded. 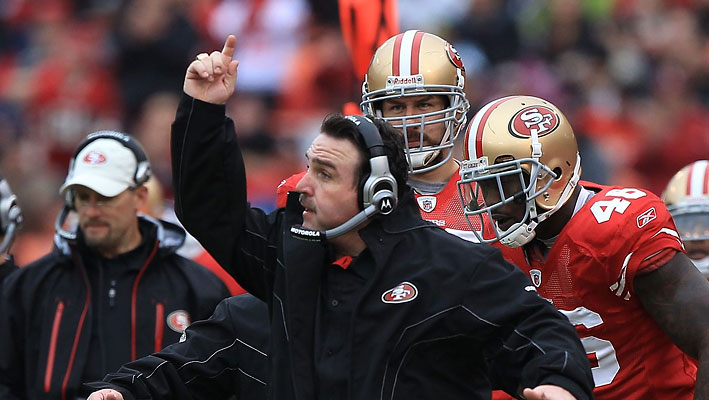 While the roster bleeding has come to an end, what we do know about Jim Tomsula is that he has never faced higher expectations in his career than he does now. The 49ers had gone to three consecutive NFC Championship Games until the chaos that was the 2014 season broke out. Of the eight candidates whom the 49ers considered, Tomsula had the least experience, which means that the fans aren’t likely to give him much of a honeymoon. The good thing is that Tomsula is brimming with confidence. 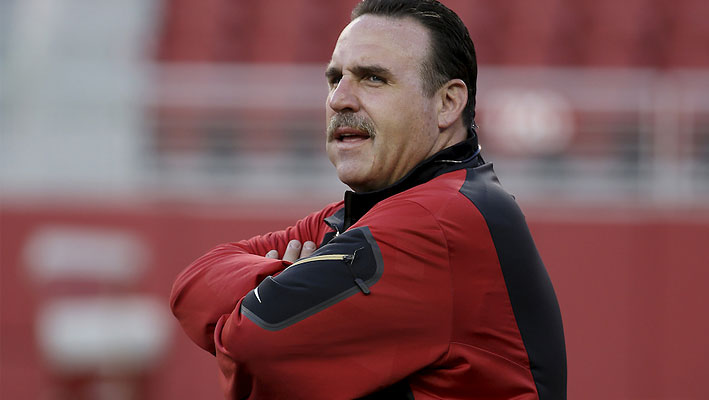 Tomsula’s great-grandfather emigrated from Hungary and found a job in a Pennsylvania coal mill, only to die when a coal pulverizer hit him. His great-grandmother didn’t know how to drive, but that didn’t keep her from putting the kids in the car and heading to their new home, where she would wash church floors. Tomsula’s grandfather and father worked in a Hungarian restaurant that went under when old Forbes Field closed. Tomsula himself learned how to weld stainless steel as a third grader, and his teenage job was laying bricks. He made it as a football player at Middle Tennessee State and then Division II Catawba College. After he graduated, people told him to go into coaching, but he wanted to make money instead. However, after a short time making six figures as a medical equipment salesman, his wife told him to leave the money behind and go into coaching. He found a job as an assistant at Charleston Southern for $9,100 per year. He delivered newspapers, worked as a janitor and chopped wood to bring in more money. 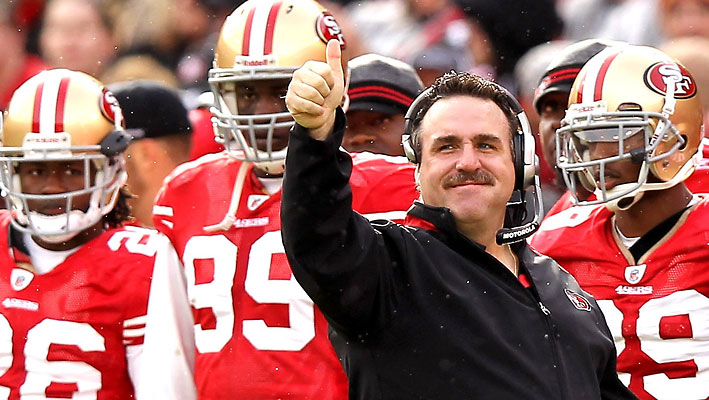 After a year living in a car and selling carpets while coaching for free at Catawba, Jim Tomsula got a salaried coaching job and ended up coaching in NFL Europe. So he spent nine years coaching at Catawba in the fall and then coaching in NFL Europe in the summers, working his way up to becoming the head coach of the Rhein Fire in 2006. The time he spent mentoring his players paid off when two of them ended up on the 49ers, and then-head coach Mike Nolan called him in 2007 to become his defensive line coach.After his promotion, Tomsula brought in assistants who would challenge him – and he has moved the head coach’s office down to the same floor as the locker room so players have to see him every day. He’s still got the same fire for mentoring that he has always had, so it will be interesting to see how the 49ers respond to him.Sources49ers.com (http://www.49ers.com/news/article-2/Patrick-Willis-Explains-Decision-to-Retire-from-NFL/c0afb6ec-0923-4e91-9bef-be7a984990e4)Wikipedia.org (https://en.wikipedia.org/wiki/Jim_Tomsula)
Older post
Newer post