NFL News and Rumors
One of the most anticipated returns to the football field will take place this season when the Minnesota Vikings begin to play – and running back Adrian Peterson is on the field once again. After a lengthy suspension kept him out of most of the 2014 season, leaving Teddy Bridgewater basically to fend for himself on the offensive side of the ball, the Vikings’ attack really suffered. However, the return of Peterson has a lot of NFL betting fans excited about the Purple People Eaters’ chances in the NFC North this season – with some optimistic enough to believe that the team will be able to knock off Green Bay and take the title themselves – or at least make a wild card. Another possibility, of course, is that Adrian Peterson will be able to break the NFL’s single-season rushing record and go for over 2,100 yards this year. Let’s look at whether that is likely, starting with reasons to think he might be able to do it.

#AdrianPeterson: I can play at a high level until I’m 36 or 37: Adrian Peterson’s newly renegotiated contract runs… http://t.co/7BUfkHSFjE

Peterson has had a year to get fresh legs. With his time off the field, Peterson hasn’t had to go through the same sort of grinding and pounding that his NFL peers have – and it’s a legitimate question whether backs such as LeSean McCoy and DeMarco Murray, who have gone through such a beating over the past several seasons, will be able to maintain their high level of performance this next season. Peterson, on the other hand, has had a year away from the hard hits and should be able to hit the ground running. The Vikings’ offensive line will be able to make plenty of holes for Peterson. While it’s true that Teddy Bridgewater spent a lot of time running for his life last season, the fact that Minnesota lacked a credible threat in the backfield meant that defenses could focus on the passing game, setting their linemen off on blitzes and pass rushes. Now that Peterson is back, defenses will have to respect both the run and the pass, and this means that the line should be able to open up gaps for Peterson to find daylight. Now, let’s look at some reasons why Peterson is not so likely to break that record. 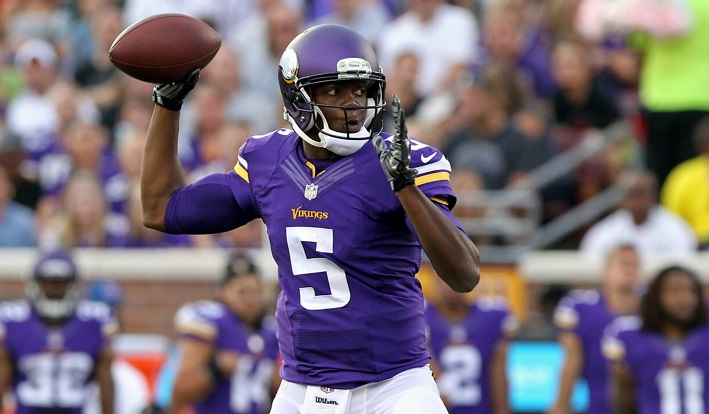 Peterson has too much rust to shake off. It’s true that Peterson didn’t have to deal with a year’s wear and tear in the NFL, but he also has been away from the raw speed that defenses bring to bear each week. As a result, he will likely be a step or two slower, at least through the first few games. Also, there is some emotional rust to deal with. It’s not like Peterson took a season off and spent it in the Caribbean; he spent it going through a legal fight that could have ended with him behind bars and affected his relationship with his children. That’s a lot of stress to deal with, even if it doesn’t involve dodging the likes of Ndamukong Suh. Teams will key on Peterson and make Bridgewater beat them. If you have a proven weapon and an unproven weapon, you want to focus on eliminating the proven weapon. Now, teams are likely to emphasize stopping the run against Minnesota. Even if this means that Bridgewater will start picking teams apart, it will keep Peterson under 2,100 yards. My prediction: while Peterson will do well in his return to the league, some of these factors will keep him from breaking the single-season rushing record – at least in 2015. Sources: ESPN.go.com (http://espn.go.com/nfl/player/_/id/10452/adrian-peterson) Wikipedia.org (https://en.wikipedia.org/wiki/Teddy_Bridgewater)
Older post
Newer post