NFL News and Rumors
The offseason talks about New York Jets QB Geno Smith have been a medley of headache-inducing drama, from his crestfallen performances over the year in the league to his promising showings in the offseason talks.Entering his third year in the league, Smith comes into the NFL odds with a lot to prove. The criticisms he has faced have been somewhat exaggerated by the media, though it would still be tough to take the bullets for him, going by his dismal performances in his two years at the center.

On one hand, Geno Smith has repeatedly ranked in the bottom five of the NFL for QBR and traditional quarterback rating in the two-year span. And to make matters worse, he’s had one of the five worst interception percentages in the league each year, turning over the ball 41 times in his 30 games in the NFL. Looking at his other advanced statistics, the numbers are also below average, compared to the top QBs in the league.On the other hand, the reality is that, even with Smith’s dimmed NFL performances, former Jets general managers, Mike Tannenbaum and John Idzik, did not provide the QB with adequate weapons, especially in O-line. In addition, Smith played in a spread offense at West Virginia, which allowed him to rack up huge numbers, but failed to prepare him for the Pro-offense used in the NFL. So when the Jets selected him with the 39th overall pick in the 2013 NFL Draft and thrust him into a starting role, he was not ready to give his best at the center, leading to his struggles, much like Tim Tebow and Johnny Manziel who’ve similarly found it difficult to transition from the spread offense to the pro offense. Plus, it would be unfair to judge Smith harshly, as he has been in the league for just two years. If history serves my memory right, a QB like Drew Brees posted below-average numbers in his first two years in the league, but bounced back and has since become one of the best QBs in the league.Can Smith Follow in the footsteps of Brees and Co. to give the Gang Green something to smile about in 2015? Going by his performance in the last couple of years, we’d probably say “No”. But based on the offseason moves made by the Jets, a “Yes” answer looks most likely.

Hope for New York in the New-look Jets 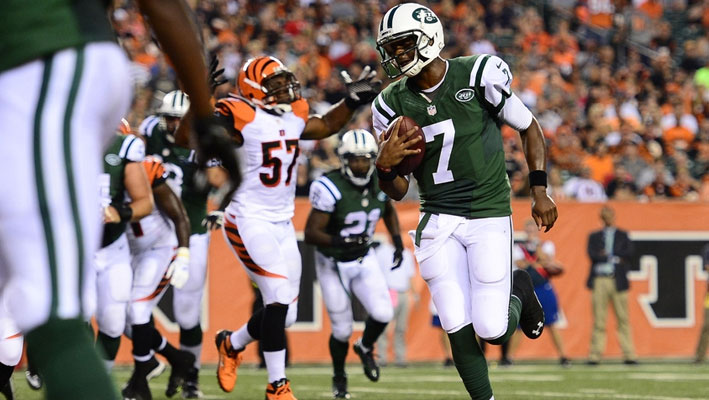 Primarily, the Jets have a new GM, Mike Maccagnan, who’s hit the ground running in his first year, making a plethora of good moves for the team. To mention a few, he acquired star receiver Brandon Marshall in a trade with the Bears, drafted a speedy receiver in second-round pick Devin Smith, and then signed running back Stevan Ridley from the defending Super Bowl Champs, the New England Patriots. Added to the existing offensive talent in the likes of Eric Decker, Jace Amaro, Jeff Cumberland and Jeremy Kerley, the 24-year old will have plenty of weapons at his disposal in 2015.Meanwhile, the Jets got some boost to their already solid defense, adding corners Darrelle Revis, Antonio Cromartie and Buster Skrine, safety Marcus Gilchrist, and top defensive player in 2015 NFL Draft, DT Leonard Williams. With an improved defense, great offensive pieces, and a more experience Smith at the center, there is certainly a lot to hope for in the new season. 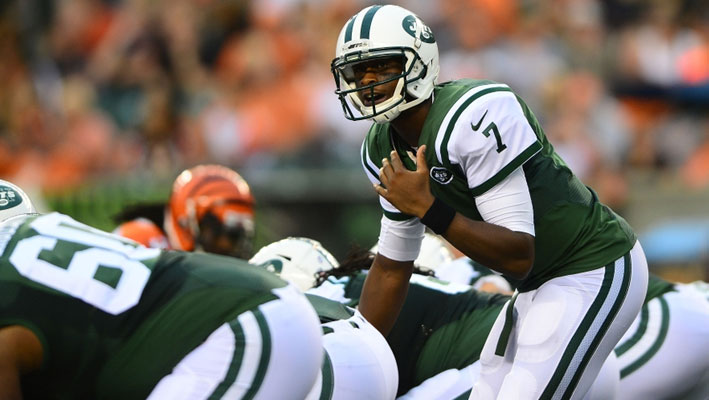 After throwing for 12 TDs against 21 picks in 16 stars (with a pass completion percentage of 55.8) during his rookie year, Smith noticeably improved to 59.7 percent pass completion for 13 TDs against 13 picks in 14 games (13 starts) in 2014. With better players surrounding him this year, Smith has the tools to succeed and fans can rightfully expect a better performance than last year, probably in the region of 15-plus TDs with 10 or less picks. Of course, the improvement in his statistics will largely depend on whether he maintains his job as the starter, considering he will be facing stiff competition from new signing QB Ryan Fitzpatrick, who threw for 17 TDs against just 7 picks and tallied a 63.1 pass completion percentage when playing for the Texans in 2014. Sources:ESPN.com: http://espn.go.com/nfl/player/_/id/15864/geno-smithNFl.com: http://www.nfl.com/player/brandonmarshall/2495893/profile
Older post
Newer post