NFL News and Rumors
Listening to all the preseason talks about the AFC North, it is easy to see why the Pittsburgh Steelers are being viewed as the hottest candidates to dominate the division and win the title at the end of the 2015-16 NFL betting season.For starters, the Steelers are the defending AFC North champions, having edged off strong competition from Baltimore and Cincinnati (who both qualified for last year’s playoffs), alongside a decent Cleveland Browns team that sat atop the AFC North at 6-3 in early November before melting down in the final stretch of the season.If that is not exciting enough, the Steelers boast of having one of the best coaches in the league in Mike Tomlin and a roster that is laden with superstars. Quarterback Ben Roethlisberger is a three-time Pro Bowler and the youngest starting QB in the NFL to ever win a Super Bowl. In 2014, he led the league in passing yards, exploding for 4,952 yards. Meanwhile, running back Le’veon Bell and WR Antonio Brown were standout performers last year and are among the NFL odds favorites to lead the league in rushing and receiving yards in 2015. In essence, that’s the reason Big Ben, Bell and Brown were named in the All-AFC North Team released the other week, which included many other Steelers.  Unfortunately for the Steelers, they own the league’s toughest strength of schedule in 2015, their defensive line has suffered some key losses, and Bell will be suspended for the first three games in the new season, among other challenges, forecasting a worrying future for the team. Will the Steelers stand tall in the AFC North at the end of it all, or will they succumb to the challenges? Follow us, as we break it down in the season NFL betting preview below. 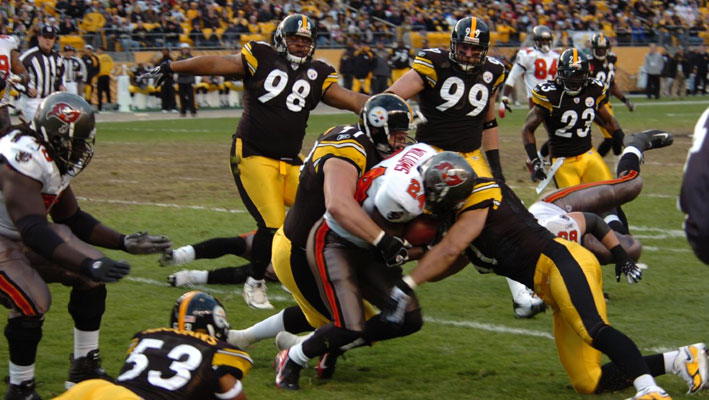 The biggest worry for the Steelers’ defense in 2015 is the retirement of Pro Ball and future Hall of Fame safety Troy Polamalu alongside star cornerback Ike Taylor. Brett Keisel, another asset in Pittsburgh’s defense, also decided to leave the team.As if that is not enough, the Steelers will be without coordinator Dick LeBeau, who is the key reason behind Pittsburgh’s defensive stability over the past 11 years.According to offseason reports from Pittsburgh’s training camp, the new-look defense under coordinator Keith Butler has shown sparks of brilliance, but it would be hard to judge them based on that, as there was no live hitting in the workouts.Commendably, though, the team made a couple of good defensive additions in the offseason, including the selection of Bud Dupree in the first round of the 2015 draft. Dupree will be competing with former first-rounder Jarvis Jones and two menacing veterans in James Harrison and Arthur Moats for the outside linebacker spot. Though all the four players can realistically play, only two of them can win the job. The cornerback spot will also have a lot of competition.In overall, some slight drop in efficiency could be witnessed in the D-line. Nonetheless, the defensive unit brings a lot of talent, so you can expect a good-enough season from them, with the likes of Jones shining brightly as the team records at least 40 sacks. 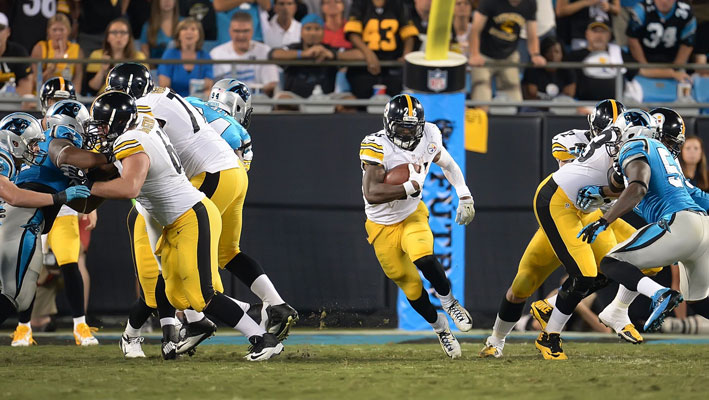 As long as Big Ben is still leading the team, Pittsburgh’s offense will always be good, so 2015 shouldn’t be an exception. In fact, after missing the 5,000-yard mark by just 48 yards in 2014, expect Roethlisberger to join the 5,000 yards club this year. Yes, Bell missing the first three games of the season will probably see a drop in his numbers. But after totaling 83 receptions on 105 targets for 854 yards last season, it would be a big mistake to undervalue his worth when he returns to the team.Plus, even with Bell out of the equation temporarily, the Steelers still have an extremely endowed group of receivers to keep Big Ben busy. Most notable of them all is none other than Brown, who led the league receptions (129) and in yards (1,698) last year. Of course, there is also a lot of value in the experienced duo of Martavis Bryant (who boasts of a great knack to find the end zone, exhibited by his 8 TDs scored in ten games last year) and Markus Wheaton (managed 53 receptions on 87 targets for 644 yards last year).And as far as tight ends are concerned, Heath Miller was No. 53 in receiving yards in the entire league last year, sitting between highly-rated pass-catching specialists Torrey Smith and Jarvis Landry in the rankings. Miller should thus be able to offer a good receiving option, especially when the Steelers make passing a priority for the first three games because of Bell’s absence.

Competition in the AFC North 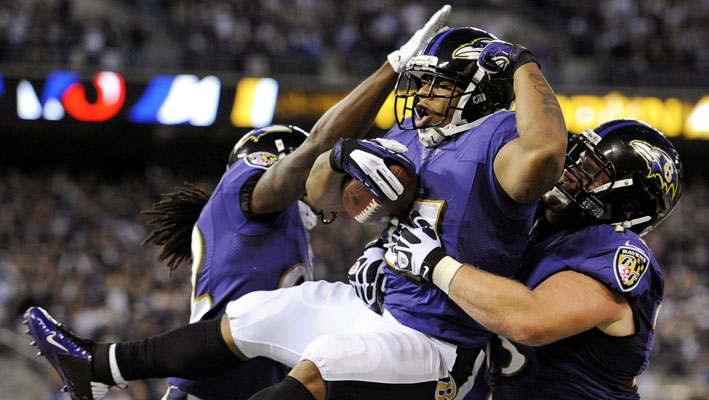 Despite doing a lot of good to the team with their whopping 10 draft picks in 2015, the Ravens saw the departure of key players like Haloti Ngata, Torrey Smith and Jacoby Jones, which could hurt their fluidity in the new season. Not to mention, Baltimore’s attack will not have the services of offensive coordinator Gary Kubiak, the chiefly reason behind the efficiency of Joe Flacco in 2014. So although Marc Trestman is a strong hire as Kubiak’s replacement, and both the draft and free agency additions will help the team fill some holes, it doesn’t look like the Ravens will be as strong as they were in 2014. 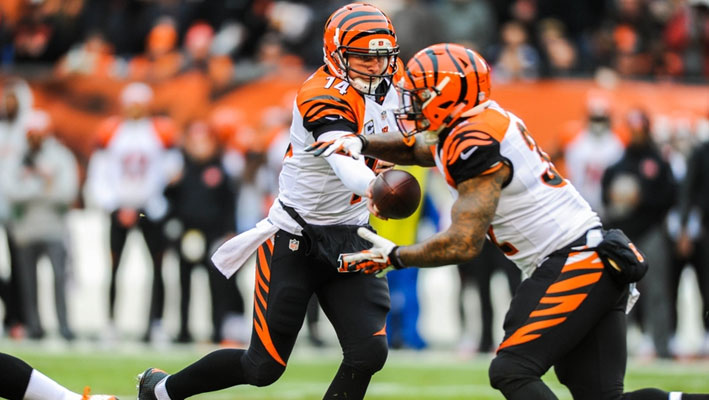 Adding the trio of Michael Johnson, A.J. Hawk and Pat Sims brings depth and experience to Cincinnati’s defense, and the losses of Terence Newman and Taylor Mays were addressed by the draft. Offensively, Andy Dalton is a serviceable QB and A.J. Green is a standout WR talent. Unfortunately, Dalton is a middling passer and his game usually abandons him in January, as is evidenced by four straight playoff losses for the Bengals. Therefore, even though Cincinnati’s roster is stocked with talent that can logically pursue another playoff berth, Dalton’s unreliability is likely to cost the team a chance at solid competition. Oh, and the Bengals have the second-toughest schedule in the league in 2015, spelling further doom to the team and watering down the hopes of a fiery season. 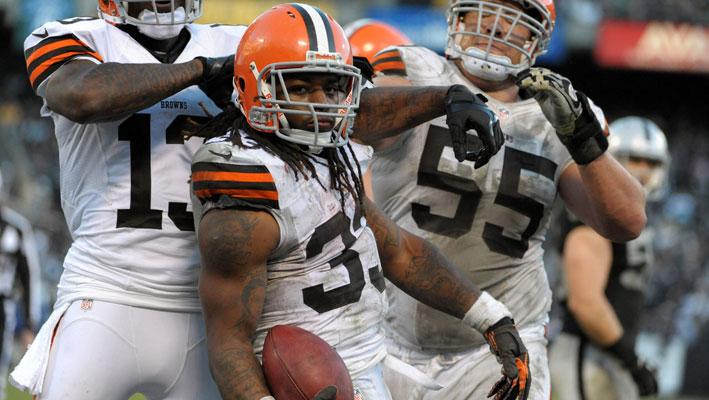 To solidify their defense, coach Mike Pettine and the Browns added more veteran talent (lineman Randy Starks and corner Tramon Williams) to a promising defense from 2014, giving the team a chance to play better D. Sadly, Brian Hoyer (who was probably the only bright light in the team last year) is out, so the team now has to make do with the inconsistent services of Josh McCown at the center, with the embattled Johnny Manziel as his backup. After GM Ray Farmer tried twice to trade for Sam Bradford before he reportedly failed in a trade-up for Marcus Mariota, it is clear that, just like us, the Browns don’t trust the current Cleveland quarterbacks, And for that reason, there is no hope for a good Browns team in the new season. 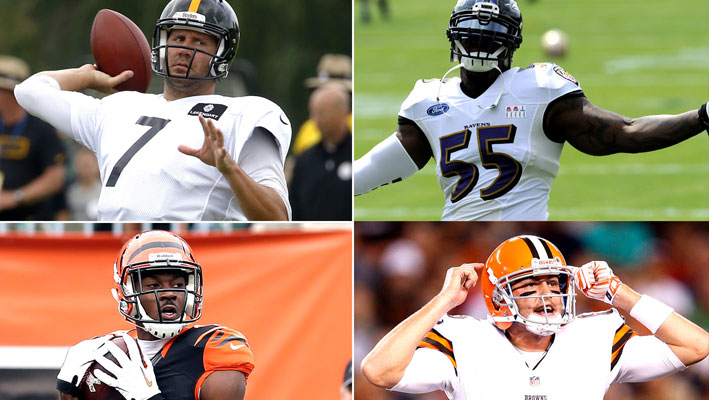 Evidently, the main competition in the division will come between Pittsburgh and Baltimore, with Cincinnati having a chance of sneaking into relevancy. The Browns are nowhere near the levels other teams in the AFC North, so don’t expect anything huge from them. All in all, Pittsburgh should be able to avenge the loss to Baltimore in last year’s playoffs (which, as we all know, mainly happened because Bell was unhealthy) and probably sweep all its AFC North games en route to a dominant season. In fact, with factors like Tom Brady’s suspension factored in, the Steelers could not only win the AFC North title, but they’d also be able to challenge for the best regular-season record in the entire AFC Conference. Sources:ESPN.com: http://espn.go.com/nfl/player/_/id/8444/heath-millerNFL.com: http://www.nfl.com/player/a.j.green/2495450/profile
Older post
Newer post