NFL News and Rumors
When it comes to Jameis Winston and Marcus Mariota, online betting fans across the globe have already formed steadfast opinions on the top two picks in the 2015 NFL Draft and I am no different.NFL football pundits everywhere are almost universally split on whether Winston, the No. 1 overall selection or Mariota, the No. 2 overall pick, will turn out to be more the more productive professional over the course of their respective NFL careers.Thankfully, I am going to offer up my own expert predictions in this fun-filled football analysis on how I believe the careers of both ‘polar-opposite’ signal-callers will play out.Let’s get started with Winston, the former Florida State 2013 Heisman Trophy and NCAA Championship winner.If you’re like most football fans that follow both, NCAA collegiate gridiron action and their professional NFL counterparts, then you have almost assuredly formed an opinion on Heisman Trophy-winning quarterbacks Jameis Winston and Marcus Mariota. 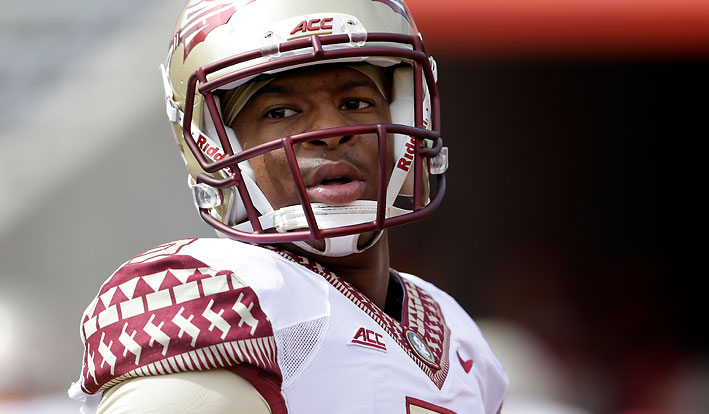 Likewise, NFL pundits, bettors and casual fans alike also believe they know how the respective NFL careers of both signal-callers will play out once the pair takes to the field for their rookie seasons in 2015.Of course, I have formed my own opinions on how I believe both quarterbacks will fare once they face the bigger, faster and meaner defenders that make up NFL defenses across the league.With that said, let’s get started with former Florida State superstar Jameis Winston.

No matter what you think about Winston’s off-field behavior and character, there’s no denying that the 2013 Heisman winner is seriously gifted. The 6-4, 230-pound Winston completed at least 65.3 percent of his passes in each of his two seasons at Florida State while throwing a combined 65 touchdown passes and 28 interceptions. While Winston doesn’t run it very often – or very well for that matter – he does have great vision and an understanding of defenses that I believe is unmatched by any quarterback in this draft.I know Winston has maturation issues and that any off-field foolishness could quickly sideline him at any point in his NFL career, but I also believe he’s going to a great situation in Tampa Bay playing for no-nonsense head coach Lovie Smith and that he’s actually going to surprise a lot of people by staying out of off-field trouble.One thing about Winston that I genuinely believe is that the former Seminoles superstar wants to be great and that he’ll do just about anything to become a great NFL player.“Jameis on the field will grade out exceptionally well,” Trent Dilfer, a former NFL quarterback who coached Winston in the Elite 11 high school camp, told USA Today Sports. “He did stuff in college NFL quarterbacks can’t do.”“Jameis Winston, who rushed for a billion yards in high school and ran around and dominated physically, got to college and decided, ‘I want to be a great pocket passer, and I know my size and speed can bail me out of some stuff, but I first want to play from the pocket, “ Dilfer added. “I want to be Tom Brady, Peyton Manning, Drew Brees, Dan Marino – that’s how I see myself – but I also know I have this other thing.’

There are several factors that you need to take into consideration when making a prediction like this. What kind of team is Winston heading to and what kind of head coach will he be playing for? Will Winston and offense will he be playing in and who are his top receiving targets?With that said, let’s examine those questions.Winston will be heading to a Tampa Bay Buccaneers (2-14 SU, 7-9 ATS, 5-11 O/U) team that will run the ball first and foremost for conventional head coach Lovie Smith. Under Smith’s direction, the Chicago Bears were a run first team, though they also threw the ball fairly consistently once they acquired Jay Cutler. 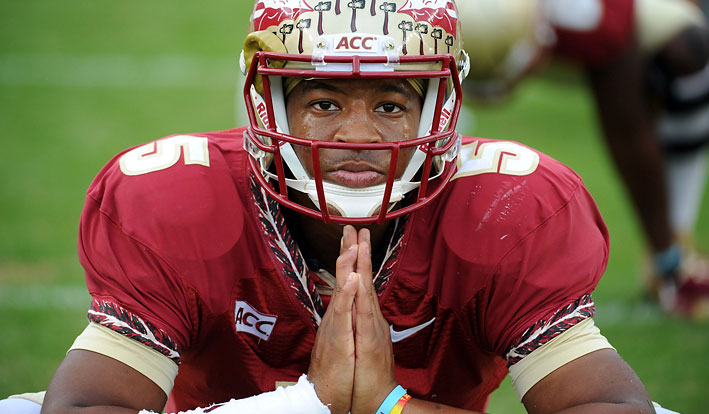 I suspect that Smith will look to lean on running back Doug Martin while easing Winston into the role as a starter. Still, Winston will have his chances in the passing game with the Bucs looking to improve their 29th-ranked passing attack (206.1 ypg) from last season.The good news for Winston is that he has a very good receiving corps to throw to starting with young wide receiver Mike Evans and a still-quality veteran in Vincent Jackson. Even playing in a run-first offense, I think Winston can reach the 3,000-yard mark while completing approximately 63 percent of his passes.I know Winston threw a whopping 18 interceptions as a sophomore this past season and I believe he’ll throw somewhere in the same vicinity as a rookie in 2015. I’m thinking 3,142 passing yards along with 24 touchdown passes and 16 interceptions sounds about right for the former Florida State star who I expect to start right away as a rookie.

Marcus Mariota had a fantastic three-year run at Oregon that got better each season and culminated in Mariota winning the 2014 Heisman Trophy while leading the Ducks to a berth in the national championship game in the first-ever, four-team playoff.Mariota completed at least 68.3 percent of his passes in two of his three seasons while completing an impressive 63.5 percent as a sophomore. The cerebral signal-caller also never three more than six interceptions in any season while finishing his collegiate career with 105 TD passes and just 14 interceptions.Mariota also has an added skill set in that he can run the ball as well as any quarterback in recent memory. Mariota may stand 6-4, but he’s a thin 219 pounds and the fleet-footed signal-caller rushed for at least 700 yards in each of his three seasons at Oregon.Still, there are concerns that Mariota could struggle in adjusting to a more conventional pro system where he’s under center more than in the wide-open shotgun system he was used in at Oregon.“I think what we’re all learning is that the NFL defenses catch up fairly quickly to the new style of quarterback,” NFL Network chief draft analyst Mike Mayock told USA Today Sports. “At the end of the day, if you can’t win from within the pocket, you’ve got no shot at being a franchise quarterback in this league.“It’s a really difficult projection.” 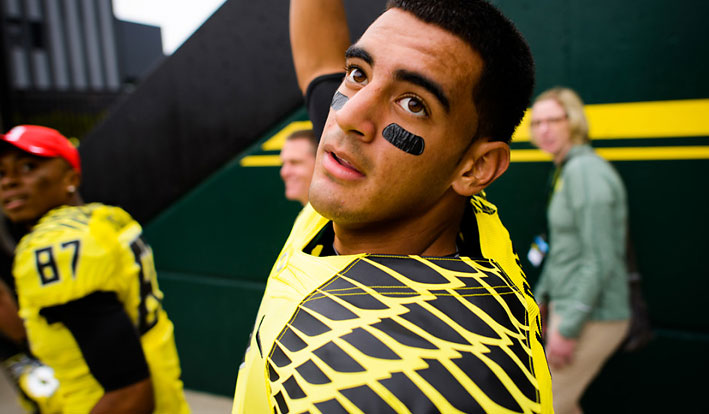 “That’s a warning sign for Mariota,” Mayock added. “One of the biggest challenges for guys coming out of that offense is knowing the difference between college open (receivers) and NFL open. … You get in the NFL, you better pull the trigger.”

As previously stated, there are several factors that you need to take into consideration when making a prediction like this. What kind of team is Mariota heading to and what kind of head coach will he be playing for? Will Mariota and offense will he be playing in and who are his top receiving targets?Marcus Mariota will be playing for an innovative head coach in Ken Whisenhunt and that’s good because the former Arizona Cardinals head coach is known for his work with both, Ben Roethlisberger and Kurt Warner.The bad news is that Mariota will be throwing passes to a fairly young receiving crew that isn’t long on experience. Harry Douglas and Kendall Wright are scheduled to start though 2015 draft pick Dorial Green-Beckham could find his way into the starting lineup at some point, likely in place of Wright.Nevertheless, I expect Mariota to start right away and contribute more each and every time out, although I suspect he will also struggle a bit more than Winston while he learns the game from a more traditional aspect. 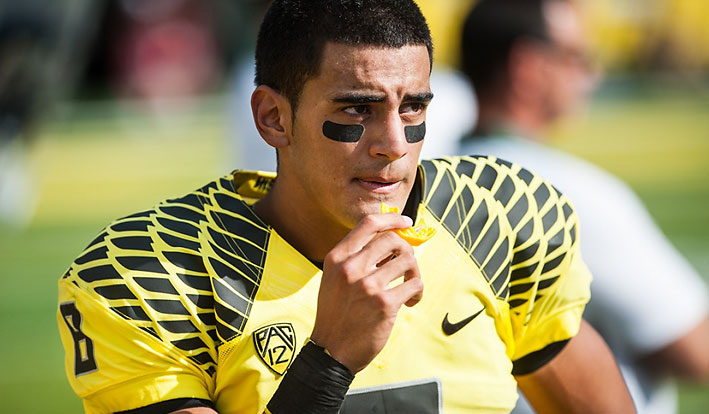 I think Mariota will fall just short of passing for 3,000 yards, although I suspect he will still be able to complete at least 65.0 percent of his passes while throwing less than a dozen interceptions.I think, 2.912 passing yards with 22 touchdowns and nine interceptions sounds about right for Marcus Mariota as a rookie for the Tennessee Titans in 2015.

I like Jameis Winston to top Marcus Mariota in passing yards and touchdown passes. However, I’m also standing firm in my belief that Mariota will complete a higher percentage of his passes while throwing fewer interceptions.I suspect that Tampa Bay will have the better regular season record although I wouldn’t necessarily say that’s a given with the Bucs playing in a very competitive NFC South.

Now…on to a special treat for NFL fans

Seattle Seahawks Super Bowl-winning quarterback Russell Wilson threw for 3,118 yards as a rookie back in 2012 while playing in all 16 regular season games. Along the way, the cerebral Wilson completed an impressive 64.1 percent of his passes with 26 touchdown passes and just 10 interceptions.Simply put, do you think either Jameis Winston or Marcus Mariota will surpass Wilson’s rookie statistics in 2015?Let us know what you think mybookie.ag gridiron gamers!SourcesNYtimes.com (http://www.nytimes.com/2015/04/17/sports/football/jameis-winston-being-sued-by-accuser-in-alleged-rape-in-2012.html?_r=0)ESPN.com (http://espn.go.com/blog/tennessee-titans/post/_/id/13760/marcus-mariota-is-a-different-sort-of-test-case-for-ken-whisenhunt-titans)
Older post
Newer post