NHL Betting News
What a team lacks in skill, they can often make up in heart and sheer force of will. That is exactly what you get with the Calgary Flames. This team is not short on skill guys, but they are woefully short on playoff experience, which can cause the best players to freeze once the postseason rolls around. The Flames have been one of the most resilient teams in hockey all season, and they will need to be that way again when they face the Anaheim Ducks in Game 4 of their Western Conference online betting match-up at the Saddledome on Friday night.

Time: Friday, 9:30 p.m. ETVenue: Scotiabank Saddledome, CalgaryNational TV: NBC Sports NetworkOpening line: Ducks -135, Flames +122 (4.5 goals)Game 3 of this series provided a perfect snapshot of what the Calgary Flames have delivered all season long. The Flames came bolting out of the gate and got the lead early, only to eventually fall behind to a Ducks team that looks as confident and composed as any team in the postseason. The Flames got back to a tie before quickly falling behind again. With a touch over 6 minutes to play, it looked as though Sam Bennett had tied things up again, but after a review that took an eternity, the refs said there was not enough video evidence to seem it a goal. Many teams would have folded at this point, but the Flames kept plugging away and finally got their reward when Johnny Gaudreau sent a shot high into the net with less than 20 seconds on the clock. Michael Backlund supplied the heroics in OT, getting the Flames back into the series in the process. 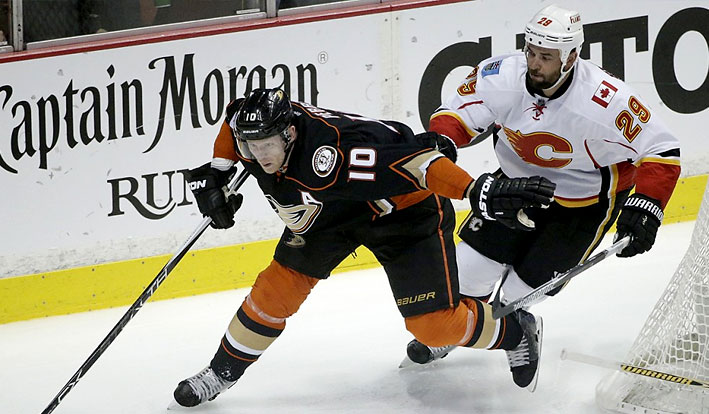 The OT goal represented the first time that the Ducks have looked rattled in the postseason. Ryan Getzlaf chased down officials to argue a missed call from earlier in the OT session, making it clear that he and his team were not impressed with the officiating. Getzlaf, along with linemates Perry and Maroon, have been imposing their will all over the Flames in this series, and will need to do so again in Game 4 if they want to snuff out the life that the overtime goal breathed back into a Calgary team that looked down and out. A in for them in Game 4 would almost certainly mean the end of the series, as Calgary has been unable to win in Anaheim for a period that stretches back 25 games.

As much as it looks as though the Ducks have everything it takes to win the Stanley Cup, and not just this series, the Flames are a team that will just not go away quietly. Don’t be surprised if they find some more magic and tie up this series on Friday night. SourcesCBC.ca (http://www.cbc.ca/sports/hockey/nhl/flames-sam-bennett-set-to-reach-key-nhl-milestone-1.3061354)NHL.com (http://www.nhl.com/ice/player.htm?id=8470612)
Older post
Newer post