NHL Betting News
One of the more intriguing online betting match-ups in the Eastern Conference playoffs pitted the Washington Capitals against the New York Islanders. Choosing the winner of this one looked like it might come down to a coin flip, and that is the way it is going, as they go into Game 5 on Thursday with the series knotted at 2. Game 5 will see the series head back to Washington, with the winner of that one becoming a strong candidate to take it all.

Date: Thursday, April 23, 2015Time: 3:45PMVenue: AT&T ParkOpening Line: Washington -135History has shown that teams that go far in the playoffs usually do so by riding the hot hand of their goaltender. If that is indeed the case, then Washington have to like their chances, as Braden Holtby has been as close to perfect as possible between the pipes. The Islanders had numerous chances to win Game 4 on home ice and skate into Washington with a 3-1 series lead, but Holtby found a way to turn them back time and again. Goaltending is proving to be huge in this series, and the last two games have gone to OT, with the eventual winner escaping with a 2-1 win. This is a series that truly is balanced on a knife edge, and you get the sense that Game 5 could well be the pivotal game in this one. 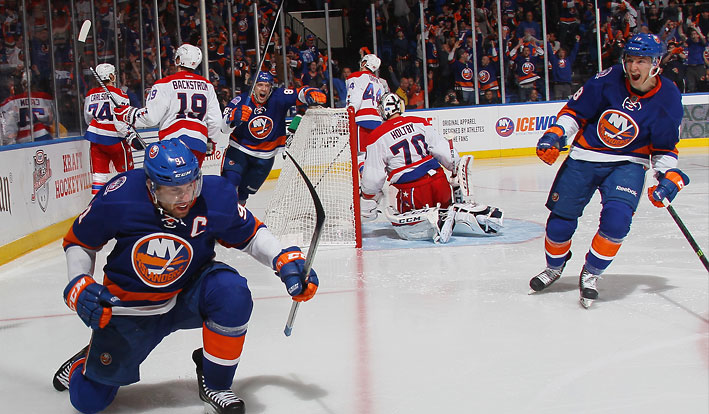 The Islander have to be reviewing the Game 4 tape and wondering how they are not thinking ahead a little to round 2 of the playoffs. You have to wonder if the Islanders are now looking back to the final game of the season against the Columbus Blue Jackets, where they essentially gifted away home ice advantage. If this series does go 7 games, which it’s beginning to look as though it might, you have to wonder if this team has was it takes to steal one on the road in Washington. This does not look like a confident bunch right now, and when you combine that with a struggling offense trying to beat a hot goalie, you end up with what might be a mis-match.

The Capitals are still probably in a little bit of shock at being able to steal Game 4 away from the Islanders, and I think they are going to ride that momentum to a win on Game 5. Expect another tight one here, though, with the goalies once again being the star of the show.
Older post
Newer post