NHL Betting News
Given how the Tampa Bay Lightning and the Chicago Blackhawks can score in bunches, the general consensus was that the Stanley Cup Finals were going to be a wide open, high-scoring type of affair. It may well still turn out to be that way, but Game 1 was a tight, defensive struggle that was only decided late in the game. The second game in the series is set for Saturday night in Chicago with NHL odds favoring Tampa Bay to take the win.

Time: Saturday, 7:15 p.m. ETVenue: Amalie Arena, TampaNational TV: NBCOpening line: Lightning -124, Blackhawks +112 (5 goals)The Tampa Bay Lightning are going to look back at Game 1 as something of a missed opportunity. Alex Killorn gave the Bolts the lead inside 5 minutes, which took the crowd out of the game early. Tampa Bay were the top goal scoring team in the regular season, so you got the sense that they would go on and try to get this one over quickly. That was not the approach they took, though, as it appeared that they opted instead to play a very neat, structured style that was meant to hamper the Blackhawks as opposed to creating offensive opportunities. In fairness, it was a style that worked to perfection in Game 7 versus the Rangers in the Eastern Conference Final, but it blew up in their face here, as Chicago rallied late to get the vital 2-1 win. 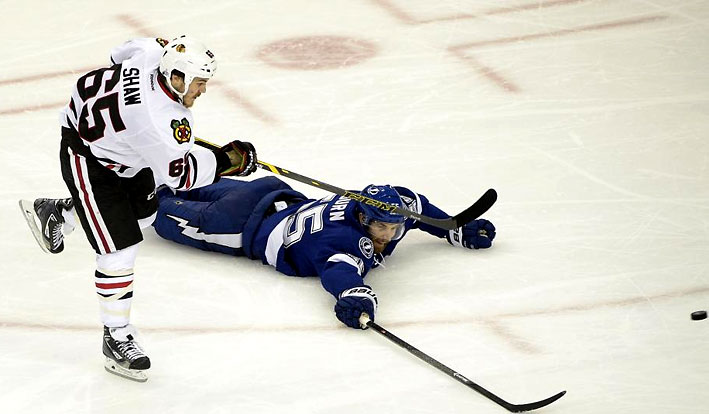 Everyone seems to forget that this Chicago team has been here before in recent years, and they displayed a level of patience and maturity that proved they are a potential dynasty in the making. Going into the third period still down a goal, it would have been easy to throw caution to the wind in the search for a tying goal, but they continued with their patient approach. It finally paid off with less than 7 minutes to play, as TeuvoTeravainen found the net for the equalizer. As soon as that puck went in, you got the sense that this thing was over, and sure enough, Antione Vermette had them in front just 2 minutes later. The Lightning did a great job of keeping the main guys off the board, but Chicago proved that they have real depth on the bench with this effort.

Tampa Bay are going to have to play a little bit more openly in Game 2, as an 0-2 deficit heading back to Tampa would be a disaster. The team that has won the first game of the Stanley Cup Final has gone on to win it 77% of the time. I believe the Blackhawks will take Game 2 and improve their odds even further. SourcesNHL.com (http://lightning.nhl.com)ESPN.com (http://espn.go.com/nhl/player/_/id/2592095/teuvo-teravainen)
Older post
Newer post