NHL Betting News
Courtesy of their 3-1 win over the Vancouver Canucks on Tuesday, the Calgary Flames (48-31-7) lead their series 3-1 and simply need to one more win to advance to the second round of the NHL Playoffs for the first time in over 10 years. All that could be made possible if the Flames can scorch out the Canucks (49-32-5) on Thursday Night in Game 5 of their best-of-seven Western Conference quarter-final.Here is a preview of this all-important NHL betting thriller that comes with very high stakes for both teams whose respective postseason fates will be hugely determined by the outcome of Thursday’s matchup:

Venue: Rogers Arena, Vancouver, British ColumbiaDate: Thursday, April 23, 2015Time: 10:00 PM ETTV: CNBCSeries Standing: Flames lead series 3-1Entering this matchup, the Canucks have opened the NHL lines as the betting favorite to win Thursday’s game, but the up-swinging momentum is with the Flames, who come into this clash with two straight wins over Vancouver in their series.In the last game, a 3-1 win by Calgary, the Flames benefitted from a strong start with three first-period goals, before the defense (led by Jonas Hiller’s 28 saves, including a massive 15 saves in the third period) took care of things to preserve the lead. As far as the goals were concerned, Jiri Hudler, Johnny Gaudreau and Sam Bennett each found the back of the net for the Flames, while Dennis Wideman posted a pair of assists.For the Canucks, Henrik Sedin was their lone scorer, with the majority of work being done by their defense in the second and third periods, where they were able to keep the Flames scoreless, in spite of being outshot by Calgary. Most notably, the 3 goals scored in the first period were allowed by Eddie Lack (who made just 4 saves), but when Ryan Miller came in between the pipes, he stopped all the 15 shots sent to him. 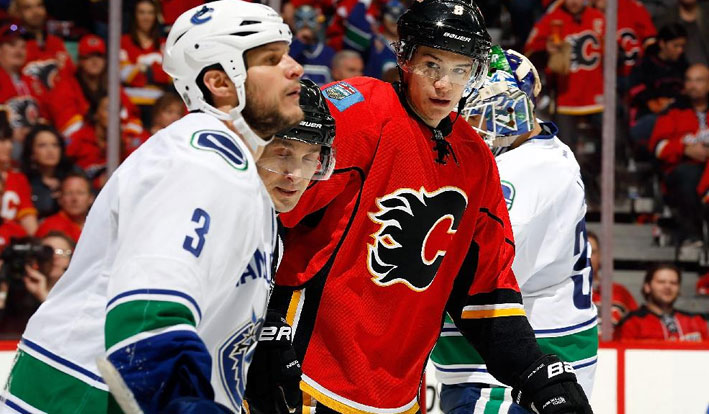 After his great stint as a goalie on Tuesday, Miller could get to start Thursday’s game, which could be the needed change for the Canucks, considering the Flames’ offense has been shooting hot recently and Vancouver will need the safest pair of hands (and legs) in between the pipes.

The Canucks play their hearts out to hold off the Flames, extending the series by taking it to a 3-2 record. The game total most likely stays UNDER in a low-scoring duel.
Older post
Newer post