UFC Betting News
This Saturday, there will be several watchable fights in the UFC betting 188 Fight Card, but none of those will attract as many viewers as the highly-anticipated heavyweight division clash between Cain Velasquez and Fabricio Werdum in an MMA betting thriller.Since defeating Junior dos Santos to recapture the heavyweight division title in 2012, Velasquez has defended his title twice, and although injuries have sidelined him from a lot of action recently, he is still one of the best artists in the game. This, essentially, is one of the main reasons he comes into this fight as fan favorite to claim the win en route to another divisional title.On the flipside, Werdum is the interim heavyweight champion—a title he earned by capping off a five-fight win streak with a second-round TKO win over Mark Hunt in Mexico last year. With That victory came on the UFC’s first visit to Mexico City.With Saturday’s clash having major title implications for both opponents, can Werdum take advantage of the Octagon returning to Mexico City with another victory, or will Velasquez make his case as the indomitable heavyweight fighter he’s been labeled to be in his UFC career? Let’s find out as we breakdown this mouthwatering clash, complete with expert MMA picks for all the 12 fights in the UFC 188 card.

Werdum, a Brazil-born fighter, is one of the truest masters of winning fight once he gets on top of you. In fact, through his prohibitive ground game that is well-tailored with robust attacks through solid jabs and knee power, very few can measure up to his fighting skills. And even when he’s taken down, Fabricio Werdum is skilled enough to fight from his back. A perfect example is his fight against Fedor Emelianenko, who knocked him down, but Werdum still managed to secure a submission victory while lying on his back.Even more dangerously, Werdum has perfected his jiu-jitsu style of fighting since coming to the UFC, boasting of vastly improved striking from close range as well as from distance. This makes him a tough competitor to beat when facing off an opponent where both fighters are on their feet.Still, even with his well-refined skills, beating Velasquez will need more than just a strong on-feet fighting style and nearly-perfect ground game. A great wrestler with years of winning experience in the UFC (with just one loss to his name), Cain Velasquez is a speedy and recklessly dangerous fighter, who can beat anyone in the world due to his surprising nature. 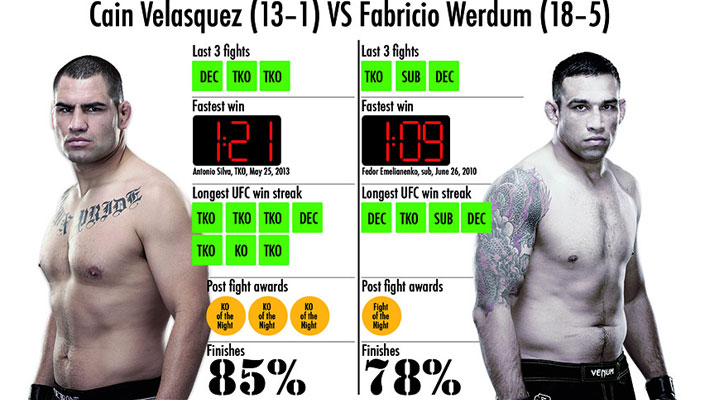 Even though he is coming a long injury layoff and the conditioning of his body could give him away to the fully healthy Werdum, Velasquez has proven countlessly that he is able to avoid being forced into situations that can easily lead to submissions from his opponents. Avoiding being taken on the ground will be very crucial, as we all know Werdum’s strength on the floor.Additionally, the Mexican-American fighter (Velasquez) is arguably the best well-conditioned player in the heavyweight division and he is very familiar with Mexico City’s thin air, which should be able to work to his advantage and alleviate any concerns about his past injuries.More importantly, Velasquez is a better fighter on his feet with better speed and a more balanced range fighting, which should help him control the fight on ground, while his lethal wrestling skills will come in very handy on the ground. 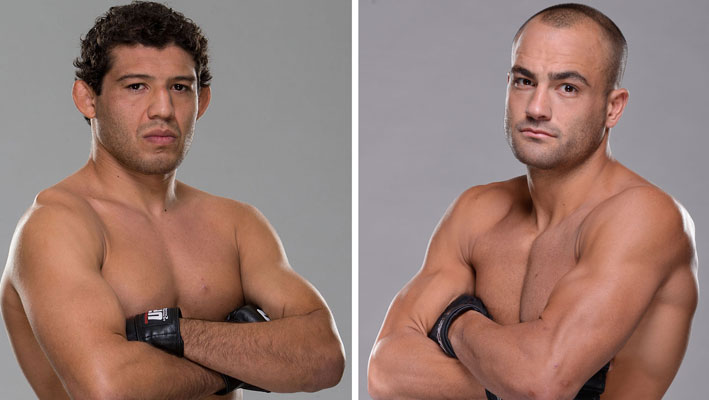 Final Verdict: Despite Werdum’s irrefutable rise in the heavyweight division, Velasquez is simply too talented and more well-rounded, so the Mexican-American should be the winner here. A win by unanimous decision would be befitting in Velasquez favor, though after Werdum trash-talked his opponent, it wouldn’t be a surprise if a mad Velasquez goes full-blown on Werdum to win by TKO in less than four rounds. Sources:ESPN.comhttp://espn.go.com/mma/fighter/_/id/2354533/fabricio-werdumUFC.com: http://www.ufc.com/fighter/Cain-Velasquez
Older post
Newer post