UFC Betting News
Rousey has been the best fighter in her division by miles, so it was not a surprise as she continued her unstoppable 12-0 run towards defending her UFC Women’s Bantamweight Championship title. And she didn’t just win, she did so in dominant fashion, beating down Bethe Correia in just 34 seconds at UFC 190 in Rio de Janeiro on Saturday. It was a masterclass performance, as she easily knocked out Correia, unleashing a devastating series of punches before taking her down and forcing her to surrender. This was a familiar story for Rousey, who has easily defeated every opponent she’s faced so far in the Bantamweight division.According to UFC analysts, all indicators point to a familiar face as Rousey’s next opponent in Miesha Tate. The two the two fighters have previously met twice. Will Rousey win this trilogy against Tate, as she’s already done twice, or will it be a case of third time’s a charm for Tate in the MMA betting odds?

Why Tate Could Win

Tate will be meeting Rousey for a third rematch looking to correct the few mistakes she ever did in the previous two fights. She last lost to Rousey at UFC 168, which took place in December 2013 in her first title defense. In March 2012, Tate fought Rousey in Strikeforce in UFC’s Women Bantamweight Championship, where she also lost. 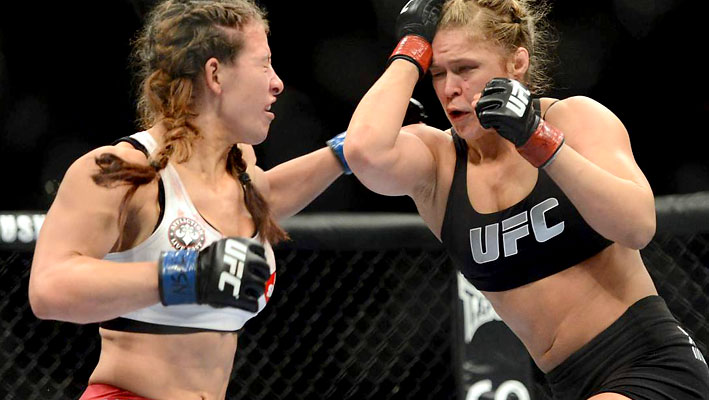 Nonetheless, Tate is the only athlete to have lasted longer than any other opponent that Rousey has ever encountered in a battlefield, taking the December 2013 fight into the third round.  More importantly, Tate, currently a 28-year-old fighter, has made a lot of progress and has not lost any fight since then. In her most recent bout, she defeated Jessica Eye at the United Center, Chicago, Illinois via unanimous decision.Additionally, Tate has really worked her way up to book another fight against Rousey, a chance she would want to capitalize on. If Tate can succeed to keep Rousey at a distance and limit her speed, a win would probably be possible for her.

Why Rousey is Likely to Still Dominate

Beating Rousey is never an easy task, but even with her dominance, Rousey is well-aware that Tate is a hell of fighter, no wander she described Tate as one of her “greatest challenges.” That said, Rousey is simply in her own class, something that is affirmed by the fact that she has spent a total of just 64 seconds to dismantle opponents in her last three fights combined. 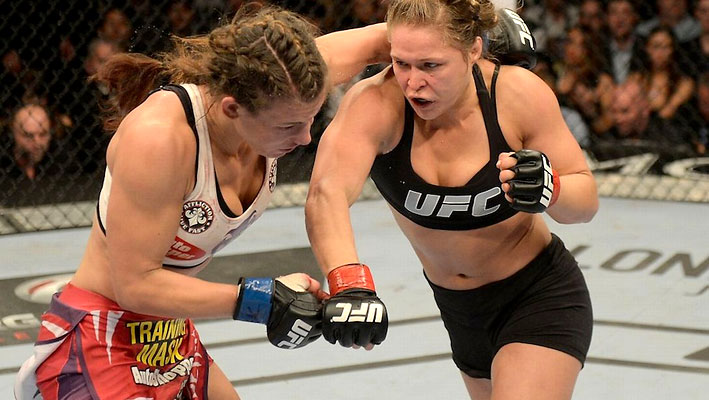 Simply put, she is a next level athlete—strong, fast, hyper-aggressive and super-confident, making it difficult to anticipate her moves or even defend against he on the cage. Rousey’s fight is built around the clinch, an area of expertise she spent years perfecting en route to two Olympic Games representing team USA in Judo. Whenever she puts her hands on an opponent, the fight often lasts for a few seconds before she gets the job done.In addition, her devastating clinch-striking game perfectly suits her well against big opponents and her veteran-like fighting intelligence allows her to deal damage in the frantic scrambles along the cage. So although Rousey still needs to do more work more on her wrestling skills as she also strives to sharpen her takedown momentum, it will take something really special for Tate, or anyone else for that matter, to beat the Riverside County native. 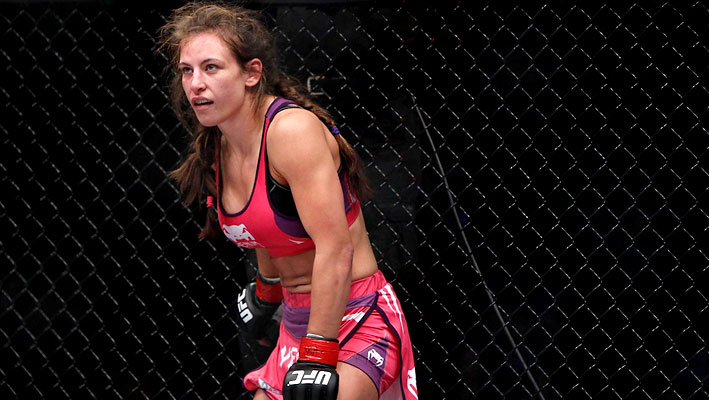 There have been many speculations about other possible opponents for Ronda Rousey besides Tate. Cristiane Justino continues to call out Rousey, Holly Holm, a former professional boxer who is 9-0 in her MMA career (including two wins in the UFC), has also linked to face Rousey, and Sara McMann has also been doing her fair share of talking up her chances.For these fighters, it is still a long way before they earn their chances against Rousey. As at now, it is only Tate and Cyborg who fit the bill of worthy fighters, no wander their MMA odds against Rousey have already been released, of course with Ronda as the favorite over both of them.SourcesWikipedia.org (https://en.wikipedia.org/wiki/Miesha_Tate_vs._Ronda_Rousey)Sherdog.com (http://www.sherdog.com/fighter/Ronda-Rousey-73073)
Older post
Newer post