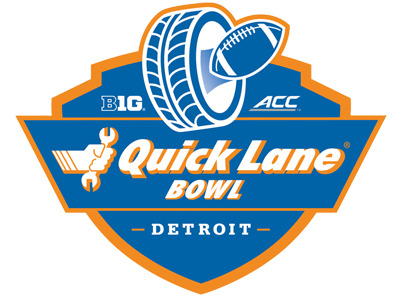 The Quick Lane Bowl is a post-season college football bowl game certified by the NCAA that began play in the 2014 season and was previously known as the Little Caesars Pizza Bowl at Ford Field and prior to that, the Motor City Bowl, where the games were played at the old Pontiac Silverdome before moving to Ford Field in 2002.

Backed by the Detroit Lions, the game is the only Bowl owned, hosted and operated by a professional football team. Ford Motor Company serves as title sponsor of the game through its auto shop brand Quick Lane.

Since 2002, Detroit’s Ford Field had played host to the Motor City Bowl—later known as the Little Caesars Pizza Bowl for sponsorship reasons; a bowl game between the 8th placed team in the Big Ten Conference and the champion of the Mid-American Conference which was first played in 1997 at the Pontiac Silverdome. In May 2013, ESPN reported that the Detroit Lions were planning to organize a new Big Ten bowl game at Ford Field against an Atlantic Coast Conference (ACC) opponent—Big Ten commissioner Jim Delany had expressed a desire to revamp the conference’s lineup of bowl games for the 2014 season to keep them “fresh”.

In August 2013, the Lions officially confirmed the new, then-unnamed game, tentatively scheduled for December 30, 2014. The team had reached six-year deals with the Big Ten and ACC to provide tie-ins for the game; the teams playing in the bowl are to be picked by representatives from each participating conference.

Last year, Minnesota handled Central Michigan 21-14 to narrowly cover the college football betting line as a 7-point favorite while the game’s 35 combined points played well under the 49-point Total. The Underdog in this annual postseason pairing, has gone 7-2 ATS in the last nine bowl matchups.