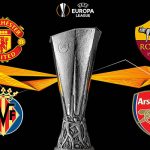 We’re down to the final four Europa League teams. The two favorites among the four are both English Premier League teams, Manchester United and Arsenal. Villareal, the third choice, is part of La Liga’s Primera Division. AS Roma is an Italy Serie A squad. Is Manchester United or Arsenal the team to beat? Or will one of the underdogs take it to the favorites and win this year’s Europa League Final? Let's try to answer those questions for you so you can get all set to make your bets against their Europa League odds.

We offer the latest Soccer Game Odds, Live Odds, team totals, spreads and lines. The latest Soccer team stats, Soccer Futures & Specials, News & other info on one of the best sport to bet on.

Posted: Tuesday, April 20, 2021 3:51, EDT
We’re down to the final four Europa League teams. The two favorites among the four are both English Premier League teams, Manchester United and Arsenal. Villareal, the third choice, is part of La Liga’s Primera Division. AS Roma is an Italy Serie A squad. Is Manchester United or Arsenal the team to beat? Or will one of the underdogs take Read More

Posted: Tuesday, April 20, 2021 2:55, EDT
One of this week’s most intriguing Serie A matchups is on Thursday when Atalanta battles Europa League final four squad As Roma. Also on Thursday, Lazio heads to Napoli to take on their rivals. Check out analysis, Serie A odds, and free picks for those two games as well as the other top Serie A matches this week. Top Serie Read More

Posted: Monday, April 19, 2021 10:02, EDT
Paris Saint-Germain exacted revenge on 2020 UCL Champion Bayern by knocking out the Bundesliga club in the quarterfinals. On April 28, PSG hopes they can take out another highly rated soccer club when they host Manchester City in the first of a 2-leg Champions League semifinal aggregate. Will the underdog home team get it done, or will the Sky Blues Read More

Posted: Monday, April 19, 2021 9:00, EDT
Based on the early odds, Real Madrid versus Chelsea should be a super competitive match. The Blues are a +209 chalk. Take away the draw, though, and Chelsea falls to +½ and -169. Even Real Madrid offers above even money odds to win in regulation. Check out early Champions League odds, analysis, and a free pick for the first 2021 Read More

Posted: Friday, April 16, 2021 12:29, EDT
One of the most intense but lesser-known rivalries in soccer happens on Saturday when for the fourth time in 2021, Barcelona throws down against Athletic Bilbao. The match on April 17 is for the Copa del Rey trophy. Barcelona has won 2 of the 3 matches. But Bilbao played competitively in both losses. The underdog knows they can hang with Read More

Posted: Thursday, April 15, 2021 11:02, EDT
French Ligue 1 matches kick off this weekend on Friday when Ligue 1 leader Lille hosts Montpellier. Paris Saint-Germain, fresh off an aggregate Champions League victory versus Bayern, hits the pitch against Saint-Etienne on Sunday. Check out analysis, Ligue 1 odds and free picks for those matches as well as all the other great Ligue 1 action happening this weekend. Read More

Posted: Wednesday, April 14, 2021 10:08, EDT
The Bundesliga starts their week of play on Friday, April 16. Matches take place from Friday through Sunday, April 18. Among the more interesting games is Bayern on the road versus Wolfsburg. Paris Saint-Germain knocked Bayern from the Champions League on Tuesday. Will the top team in the Bundesliga find enough motivation after a tough loss? Check out analysis, Bundesliga Read More