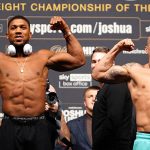 On Saturday night, WBA, IBF, and WBO champion Anthony Joshua puts his belts on the line versus Oleksander Usyk in a huge heavyweight battle. Usyk is only a slight underdog, which means oddsmakers and boxing handicappers believe he has a shot against Joshua. Does he? Or will the reigning champ end Usyk’s title dreams? Check out Boxing odds and more information for that bout as well as other great boxing matches happening on Sep. MyBookie returns with a Tennis betting preview for the 2021 Laver Cup, a cousin tournament of golf’s Ryder Cup.

Here is everything you need to know about the 2021 Laver Cup, with all the information you’ll need to place bets on ATP Betting Odds.

Even though Tennis is not exactly a team sport, Laver Cup doesn’t follow those rules. Instead, as an outlier in the tennis sports scene, Laver Cup is a unique tournament with a unique format that sees two tennis players (Team Europe and Team World) compete for the coveted trophy.

Unlike most other tournaments that use the same format, the Laver Cup does not feature the standard Team USA vs. Team World. That makes a lot of sense, considering European tennis players are by far the most successful in Grand Slam tournaments.

The 2021 Laver Cup will miss some of the biggest tennis stars, albeit there will be plenty of quality traveling to TD Garden. As per usual, most of the “quality” will be on the side of the European team, which features four of the top-five players on the ATP Rankings.

On Team World, meanwhile, the highest-rated player is world no.11, Felix Auger-Aliassime.

There’s always a great deal of excitement about Laver Cup 2021, and it’s not hard to see why. As a tournament that features some of the biggest tennis stars, Laver Cup promises to provide the tennis fans with four days of thrilling matches and plenty of betting opportunities for the bettors.

Given the huge quality gap between the two teams, it shouldn’t come off as a surprise that Team Europe are the betting favorites. Not only has the team won all of the previous three iterations of the competition, but Team Europe also dwarfs Team World in the average player rating (20.1 v 48.3).

The Laver Cup 2021 is not so much whether Europe will win, but instead by how much. That question, however, is more challenging to answer than how it may seem.

The gap is clearly closing, and it’s fair to say that the players’ average rating doesn’t show the full story. Team Europe might field much better players on paper, but that won’t necessarily translate to the final result.

Regardless, Team Europe should be losing. We might be in for another close affair, but the quality gap alone should push Team Europe over the finish line. You could make a case for a handicap bet on Team World, albeit there are no odds on offer yet.

ATP & WTA 2021 US Open Betting Update: Raducanu and Fernandez into The Finals

Posted: Friday, September 10, 2021 11:58, EDT
Mybookie returns with the daily 2021 U.S. Open betting update, where we provide you with an update of everything there is to know about the ongoing Grand Slam tennis tournament. Today, we focus on the women’s finals match between Emma Raducanu and Leylah Annie Fernandez, who will clash in the grand finals on Saturday, September 11. Let’s jump right into Read More

Posted: Thursday, September 9, 2021 1:21, EDT
MyBookie returns with a daily 2021 U.S. Open betting update, where we take a look at what has happened at the fourth and final Grand Slam tennis tournament of the year, who made it through, and who fell flat while chasing the prestigious title. Here is all you need to know about the 2021 U.S. Open, so you can bet Read More

Posted: Wednesday, September 8, 2021 12:50, EDT
MyBookie brings you a daily 2021 U.S. Open update, where we provide you an update on the latest events at the fourth and final Grand Slam of the year. Here is all you need to know about the 2021 U.S. Open with all the information you’ll need to place bets on the US Open Betting Odds. 2021 US Open Daily Read More

Posted: Tuesday, September 7, 2021 1:52, EDT
MyBookie returns with a daily 2021 US Open Betting update, where we take a look at what has happened at the USTA Billie Jean King National Tennis Center, which tennis players delivered, and who slipped and lost their shot at the Grand Slam title. Here is everything you need to know ahead of the final stage of the 2021 U.S. Read More

ATP & WTA 2021 US Open Betting Update: Chaos in Women’s Side of Competition

Posted: Monday, September 6, 2021 1:32, EDT
MyBookie returns with a Tennis Betting Update for the ongoing 2021 U.S.Open, where we take a look at what has happened at the fourth Grand Slam tournament and how have the tennis betting odds changed as a result of the recent happenings. Here is all you need to know about the 2021 U.S. Open betting odds! 2021 US Open Daily Read More

Posted: Friday, September 3, 2021 12:44, EDT
MyBookie brings you a daily 2021 U.S. Open Betting Update for Friday, September 3, where we look at what has happened in USTA Billie Jean King National Tennis Center, which tennis players delivered, who fell flat, and what to expect in the next round of play. 2021 US Open Daily Update – September 3rd Update ATP & WTA Betting | Read More