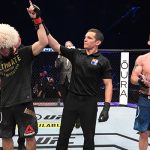 There is a lot going on in the world of MMA today, but most of the rumors and news making the headlines are all about one specific thing. Khabib Nurmagomedov extended his unbeaten streak to 29 fights on Saturday, but it is what happened after the fight that got the rumor mill rolling. In his after fight interview, Khabib announced his retirement from the UFC, a decision that took many by surprise when you consider that he has just recently said that he liked the idea of retiring after hitting 30-0.

Polarizing UFC superstar and former lightweight champ Conor McGregor makes his long-awaited return to the Octagon when he takes on reigning Lightweight champion Khabib Nurmagomedov in what will undoubtedly be the biggest MMA showdown of the year.

30-year-old Conor McGregor (21-3) stands 5’9” with a 74-inch reach. The native of Ireland hasn’t fought in the Octagon since beating Eddie Alvarez via TKO (punches) in the second round at UFC 205 way back in November of 2016. That win was preceded by a majority decision win over Nate Diaz at UFC 202 in August of 2016 and that bout was a rematch after Diaz stunned McGregor with a second round rear-naked choke at UFC 196 in March of 2016.

30-year-old Khabib Nurmagomedov (26-0) stands 5’10” with a 70-inch reach. The Russian is unbeaten in his career and comes into this title fight off a unanimous decision win over Al Iaquinta at UFC 223 in April. I won’t spill the beans too much by making a pick here, but I will say, Conor McGregor is in trouble. He’s been out of action for two years and he’s fighting arguably the best fighter on the planet. I smell a submission loss coming for the loud-mouthed former champ. Okay, so I spilled the beans. So what!

As far as big fight nights go, Bellator 250 is a little bit subdued, as there are only 3 fights on the main card. That said, the bouts that are on there look to be about as good as you can ask for. In fact, two of them are in as co-main events, so that should give you some idea of what to look forward to. One thing that everyone should be aware of is that this event is set to go on Thursday night, instead of the usual Friday night Bellator bouts, but since the main card begins at 8 PM EST, you probably won’t need to stay up too late to catch all the action. The evening will cap off with a title fight, but as we mentioned, there are a couple of fights ahead of that, so let’s take a moment to break down all the main card action, along with their Bellator odds.

It will be the ladies who step into the octagon first in the main card for a flyweight bout that looks to be about as evenly matched as it gets. It is Arteaga who comes into this bout as a slight favorite, but given her recent performances, she is probably under the most pressure. Arteaga is 5-4 in her pro career, but she is coming into this fight on the heels of back to back losses. She does make a habit of going the distance, so do not expect this one to be over quickly. Yanez is 5-2 and is coming off a loss, plus she is making the step up for her first fight in Bellator. That said, she might just be catching Arteaga at the right time. I definitely see this one going the distance, and I am going with the slight underdog and taking Yanez to win.

The co-main event is a featherweight bout between a pair of fighters who could both use a win to get back on track. Corrales was on a fine run of form, winning 5 in a row, before hitting a rough patch that has seen him now lose back to back fights. He made it all the way to the finish in both of those losses, but still ended up on the wrong side of unanimous decisions. Overall, his career mark sits at a still very respectable 17-5. This is essentially a must win for Girtz (16-9) as he has been watching his career head in the wrong direction over the past few years, winning just 2 of his last 7 fights. Corrales should take this one, and I like him to finish it in the later rounds.

The final fight of the night is a middleweight title fight between a pair of fighters with a ton of experience. Mousasi is a former Bellator champion at this weight class, although he lost the belt to Rafael Lovato Jr., who has had to vacate the title due to a serious medical issue. After beating Lyoto Machida in his last bout, which took Mousasi to 46-7-2, he was an automatic for another title shot. Lima comes into this title bout on a very good run of form, winning 3 in a row and 6 of his last 7. He has mixed things up in those 3 wins, gaining victories via KO, submission, and UD. I am on Mousasi to regain his title via decision.

Posted: Monday, October 26, 2020 4:39, EDT
There is a lot going on in the world of MMA today, but most of the rumors and news making the headlines are all about one specific thing. Khabib Nurmagomedov extended his unbeaten streak to 29 fights on Saturday, but it is what happened after the fight that got the rumor mill rolling. In his after fight interview, Khabib announced Read More
0 comments

UFC 254: Stats, Main Card, Prelims, and Odds for the Fight

Posted: Saturday, October 24, 2020 10:30, EDT
Next UFC fight will have one of the top MMA fighters that the promotion has to offer, we are talking about the UFC 254: Khabib vs Gaethje. This upcoming mixed martial arts event is produced by Ultimate Fighting Championship that will take place on October 24, 2020 at the Flash Forum on Yas Island, Abu Dhabi, United Arab Emirates. UFC Read More
0 comments

Posted: Friday, October 23, 2020 11:02, EDT
This Saturday, October 24, get ready for another trip to Fight Island, this time for UFC 254. This is an absolutely huge event with one of the best main cards that we have seen in a while. There are 6 fights set to go on the main card, which means a lot of betting opportunities and chances to cash some Read More
0 comments

Posted: Wednesday, October 21, 2020 8:33, EDT
Two of the hardest hitting, most experienced and toughest fighters at Ultimate Fighting Championships headline a terrific UFC 254 card. Khabib Nurmegomedov and Justin Gaethje throw down in the main event. Before Khabib and Gaethje go at it, five other battles happen on the main card, including Ion Cutelaba against Magomev Ankalaev and Walt Harris versus Alexander Volkov. Check out Read More
0 comments

Posted: Monday, October 19, 2020 4:53, EDT
We are fresh off another big weekend in the world of the UFC, with the latest version of Fight Island now in the books. We will talk more about the results there and what that means going forward a little later in this piece, but we have plenty of other news to get to ahead of that, starting with some Read More
0 comments

Posted: Friday, October 16, 2020 11:05, EDT
This weekend will see us take another trip to Fight Island in Abu Dhabi for another round of Fight Night bouts in the UFC. As is always the case, it’s another packed fight car, with 11 bouts set to go, with 5 of those coming on the main card. There are a pair of fights serving as the co-main events, Read More
0 comments

Posted: Monday, October 5, 2020 4:49, EDT
With another Fight Island event in the books, we have a lot to talk about in the world of the UFC. We will get to the ramifications of the results from the weekend in a moment, but I think we need to start out by talking about a potential fight that we all want to see and which may yet Read More
0 comments

Posted: Friday, October 2, 2020 3:45, EDT
This coming Saturday night, we head back to Abu Dhabi for another round of Fight Island, which will feature a smaller main card than we have become used to in the UFC. In all, there will be 4 fights on the main card, with the Holm versus Aldana bout serving as the headliner. That said, while the UFC official website Read More
0 comments