NCAA Basketball Betting News
Can anyone get bigger than the Maryland Terrapins in the 2015-16 Big Ten college basketball odds? It won’t be easy, we know, but the Michigan State Spartans look the part to give the Terrapins a strong run for their money in the online betting NCAAB lines. Find out more about this tight two-horse race in the Big Ten, along with other free college basketball picks for the season, which are all specially prepared for you below.

WHAT. A. GAME. See you back at XFINITY Center on Nov. 20! #FearTheTurtle pic.twitter.com/rOilP9tNHN

Led by All-American point guard Melo Trimble, and a strong supporting cast that includes Jake Laymen, Rob Carter, Diamond Stone and Rasheed Sulaimon, the Terps not only have enough talent to finish as the best team in the Big Ten, but to also contend strongly for a Final Four finish in the country.

Despite losing some important pieces from last year’s unit that went all the way to the final four, the Spartans still have enough talent to compete at the highest levels of the game. This was showcased on Monday when Coach Tom Izzo and his unit delivered a mega upset, beating the fourth-ranked Kansas 79-73. MSU do-it-all star Denzel Valentine was the star of the show, posting a triple-double and even earning a congratulatory call from Magic Johnson for his big game. If Valentine (averaging 21 PPG and 10.5 APG after two games) can continue with his ridiculous numbers, and the rest of the team also continues to chip in, the Spartans should be good enough to challenge Maryland for the title all the way to the final stretch of the season.

The Boilermakers may not have a big name like MSU or Maryland in the world of NCAAB betting, but they own the best frontline in the conference, which guarantees steady competitiveness in the Big Ten. Plus, Matt Painter did a solid rebuilding job so Purdue is loaded up once again, having the best talent in town since the memorable Robbie Hummel days. If their backcourt can step it up, the Boilermakers will certainly be a force to reckon with this year. 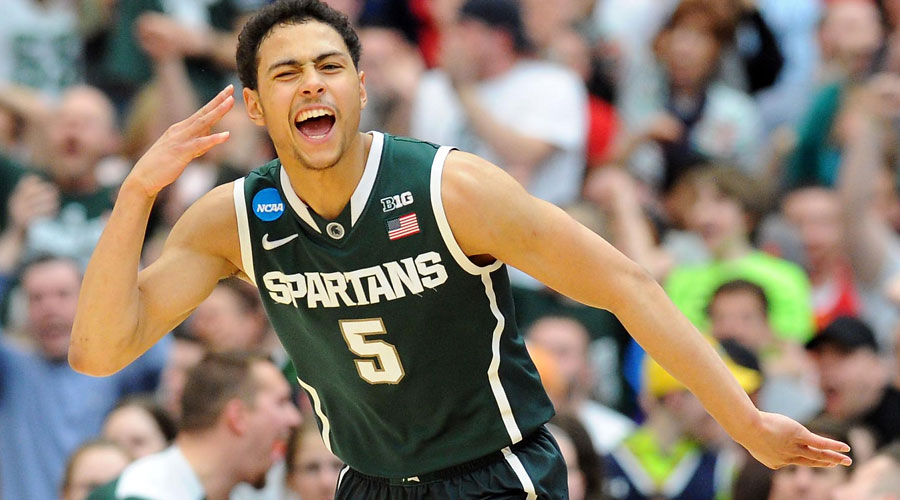 Aside from his solid recruits in the offseason, Turgeon has shown the ability to lead his team to success with just about anyone, turning the Terps from a laughing stock two years ago to a solid conference and national title contender this season. If the Terps claim the conference title as is expected of them, be sure that the COY crown will be going to Turgeon’s shelf.

Going by the way Denzel Valentine is off to a remarkable start, it wouldn’t be a surprise if he edged out Trimble (19 PPG in his two games this season) for this title. However, having seen Trimble consistently put up solid numbers last season, I am leaning on him to light it up once again this year, standing the test of time to claim the All-America honors and leading the Terps to national contention.

As suggested by his name, Stone could be a real Diamond for the Terps this season, especially in easing the burden for Laymen and Trimble. And with not many freshman names looking the part of rising to the occasion in this conference, Stone should be a sweet pick to have his name engraved in the folklores of Maryland (and the Big Ten) as a standout freshman.
Older post
Newer post