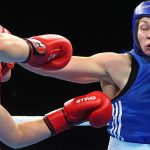 Olympic boxing continues this weekend with plenty of matches to keep pugilist fans entertained. We’ve chosen three fantastic women boxing matches that happen on July 31. On Sunday, Americans Duke Ragan and Richard Torrez Jr. are in action. Check out eight of the top Olympic boxing matches happening over the weekend so you can bet against their Olympics Betting odds.

Olympic boxing continues this weekend with plenty of matches to keep pugilist fans entertained. We’ve chosen three fantastic women boxing matches that happen on July 31. On Sunday, Americans Duke Ragan and Richard Torrez Jr. are in action. Check out eight of the top Olympic boxing matches happening over the weekend so you can bet against their Olympics Betting odds.

Great Britain’s Lauren Price dominated her last opponent,  Myagmarjargal Munkhbat. All five judges scored all three rounds either 10-8 or 10-9 for Price. Like Price, Panamanian Atheyna Bylon shows 10-9 and 10-8 round scores from her latest match. This should be a dynamite fight. Bylon may have an edge. The 32-year-old is 5’ 10”.

24-year-old Canadian Tammara Thibeault struggled to beat Nadezhda Ryabets in her last. Thibeault won 4 rounds to 1. But before writing off Tammara, realize that Noujka Fontijn also won her last bout 4 rounds to 1. Thibeault beat a Khazakhstan fighter. Eastern European boxers like Ryabets come from strong programs. Give Thibeault the benefit of the doubt.

In 3 fights, Italian Irma Testa has won over 14 judges to 1. Philippine boxer Nesthy Petecio is back on track after losing 2-of-5 judges in her 3-2 victory over Taipei’s Yu-Ting Lin in her second match. Petecio beat Yeni Marcela Arias Castaneda 5 judges to 0 in her third bout. But Testa has lost a single judge and that was in her first fight. The Italian should get by Petecio.

On Sunday, it’s Ireland versus the U.S. when Walker and Ragan throw down. Kurt Anthony Walker is 9-1 with the judges in two matches. Ragan struggled in a 3-2 scorecard victory versus French fighter Samuel Kistohurry in his first match. Duke dominated tough Kazakhstan boxer Serik Temirzhanov in his second. Because of how Ragan beat Temirzhanov, he’s the play.

In his first bout, Oleksander Khyzhniak showed why many consider him one of the best boxers at the 2020 Olympics. The Ukrainian beat Yuito Moriwaka 5-0. 21-year-old Euri Cedeno Martinez will be a decent boxer. But the Dominican Republic pugilist is up against it versus Khyzhniak. Expect the Ukrainian to win 5-0.

Boxers based in the UK are almost always more skilled than those based in France, which is why boxing handicappers must give Frazer Clark a big shot. Ah, but Mourad Aliev is no French fighter. Aliev was born in Russia. The Frenchman learned how to fight from his father, Ozer, who fought for the U.S.S.R back in the day. Aliev gets the nod.

Hebert Souza got lucky in his first bout. Souza bested China’s Erbieke Tuoheta 3 judges to 2. Abilkhan Amankul beat Fanat Kakhramonov 5 judges to 0. Amankul is one of those Kazakh boxers who should probably already be fighting pro.

22-year-old Torrez Jr. has the skills to be a great heavyweight. But he’s up against it versus Cuba’s Dainier Pero. The 21-year-old could challenge a few top ten ranked boxers in the heavyweight division. He might beat every pro heavyweight on the planet not named Tyson Fury, Deontay Wilder, or Anthony Joshua, and he’d probably have a shot against Wilder and Joshua. Torrez Jr. will put up a fight. He may win over a single judge, but that’s it.