NCAA Football Betting News
Clemson and Alabama come into this game with a combined record of 27-1. Clemson has remained undefeated all season, and Alabama just has their one loss to Ole Miss earlier in the season. Both teams have been rolling in the past few weeks, and both decimated their competition just a week ago in the semi-final. Clemson thrashed Oklahoma 37-17, and then Alabama took care of business against Michigan State with a whopping 38-0 victory. This game has seen tons of betting odds action, and the line seems firm at around 7 points in Alabama’s favor. There’s a ton of data to analyze when looking at this game, so let’s take a peek at it.

To push beyond our limits. To find out what we’re capable of. To win championships. This is #WhyWeWork. #ALLIN https://t.co/6JKzWUcnO9

Why Bet on the Clemson Tigers

Why not bet on Clemson is a better question. An undefeated team comes into the University of Phoenix stadium with everything to prove and nothing to lose. They’ve been criticized all season, but have come out on top in every category. Again they’re only second best, as Alabama is favored by seven. Deshaun Watson was only second best to Derrick Henry. Clemson is going to come into this game with a chip on their shoulder, and as long as they play football like they’ve been doing all year, a victory isn’t too far-fetched. Let’s take a look at some statistical reasons to choose the Clemson Tigers in this one. #1: Clemson has outscored their opponents by an average of 18.3 points this season. #2: Clemson has a top 30 rush defense capable of containing Derrick Henry. #3: Clemson is averaging nearly 40 points per game (38.36), and have scored in bunches against some of the top defenses in the NCAA. If Clemson wants to win this game they’re going to have to strictly take a peek at the game tape when Ole Miss beat Alabama. What they did was contain Derrick Henry, and force Coker to throw the ball. Clemson is definitely capable of slowing down Henry, as Michigan State was. The only problem with Michigan State’s game plan was that they were unable to contain Coker as well. Alabama came out passing in that game, which opened up the running lanes for Henry later in the game. He still averaged under 4 YPC in that game, but the result was still 38-0 as Coker played lights out all game. They also need to attack the weaknesses in Alabama’s defense. Ole Miss put up 43 points on their defense – but how did they do it? They destroyed Alabama on long passes that got away from their secondary, with a 66 and a 73 yard touchdown pass in the same game. Deshaun Watson is the most dangerous QB in college football right now, and is going to prove to be Alabama’s biggest challenge yet. If Deshaun can open up the passing game early, it will make room for him to run some option plays with Wayne Gallman. All he has to do is pop open the Alabama defense. Once they’re on their toes, Clemson can capitalize and score in bunches. 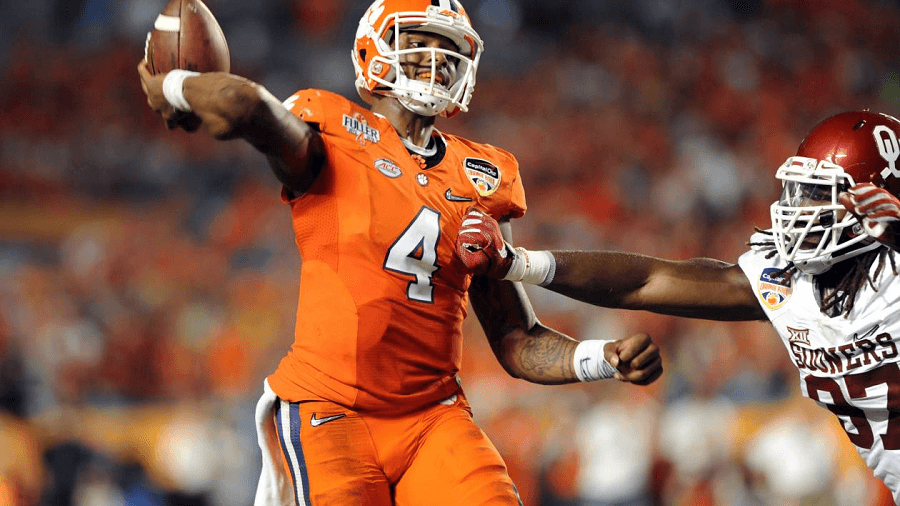 I believe in Clemson as long as their game plan works out. Alabama is a tough team to beat, but if any team can do it it’s the Tigers. I don’t think it’s crazy to get on Clemson at +235. If you want you can also bet on them at +7 and take the points, but personally if this game goes to plan, I don’t think Clemson would need them. Clemson can bring a title back to Memorial Stadium for the first time since 1981 if they execute the few things I highlighted above. Final Score Projection: Clemson 38, Alabama 35
Older post
Newer post