NCAA Football Betting News
A pair of high-scoring offenses are set for battle when they meet in the Motel 6 Cactus Bowl when West Virginia travels to Phoenix to square off against Arizona State on Jan. 2 at 10:15 PM ET.Both teams finished inside the Top 30 in total offense and in the top 50 in scoring. Now, let’s find out which teams is the correct selection at the NCAAF betting lines.

“The key going to a bowl game is being excited about where you’re at. We can check that one off.” @Holgorsendana pic.twitter.com/qLBP0rLe33

Why Bet The Arizona State Sun Devils Odds at +1

Because they’ve got an explosive offense! Arizona State (6-6 SU, 5-7 ATS) lost four of its final six games including its 48-46 loss against Cal in their regular season finale. Still, the Wildcats have an elite quarterback in Mike Bercovici (3,437 yards, 26 TDs, 9 INTs) and an offense that averaged 34.0 points per game to rank 34th in the nation. The Sun Devils also have a trio of receivers that all caught at least 50 passes for a minimum of 500 yards, including leading receiver Devin Lucien (57 receptions, 931 yards, 7 TDs). The Sun Devils also have a talented running back in Demario Richard (1,056 rushing yards, 7 TDs), though their defense allowed a whopping 32.7 points per game to rank 97th nationally. Ironically, Arizona State leads the nation in sacks per game (3.67) and ranks fourth in tackles for loss (8.9 per game). 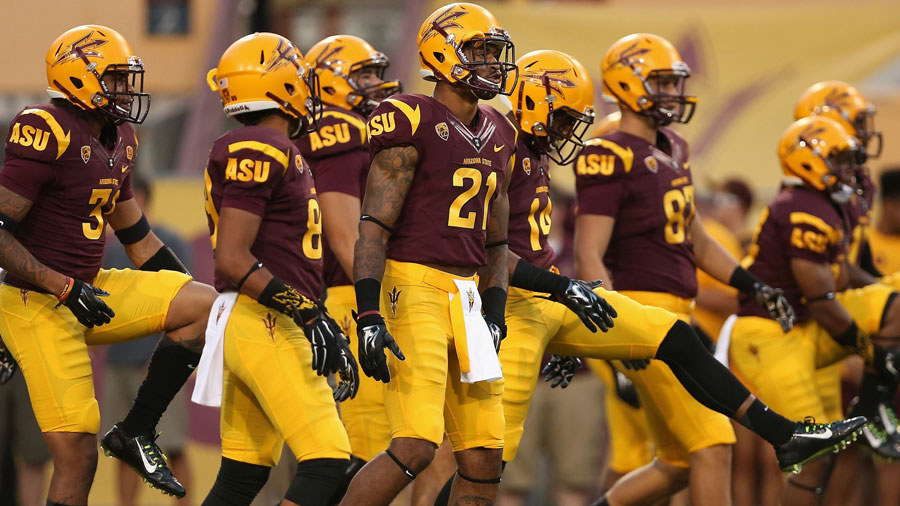 Why Bet The West Virginia Mountaineers Odds at -1

Because they’re far better defensively! The Mountaineers (7-5 SU, 5-7 ATS) will have plenty of motivation after having their four-game winning streak snapped in their crushing 24-23 loss against K-State in their regular season finale. Quarterback Skyler Howard passed for 2,613 yards with 21 touchdowns and 12 interceptions while adding an additional 479 yards and six touchdowns via the ground while underrated running back Wendell Smallwood rushed for 1,447 rushing yards and nine scores. All-Big 12 linebacker Nick Kwiatkoski leads a defense that allowed just 23.2 points per game (37th) and limited its last three opponents to an average of 265.7 total yards per game while holding all three under 100 rushing yards. West Virginia also ranked second in the nation in interceptions (23) and takeaways (31). The Mountaineers average 33.2 points per game to rank 41st nationally.

Arizona State is 7-2 SU in its last nine games after a loss and 3-0 ATS in its last three games, but I like West Virginia to get the narrow win and ATS cover because of their superior defense – and a slim 54 percent of the betting public agrees! The Mountaineers are 4-1 SU in its last five games in the month of January and has simply played better football over the last six weeks of the regular season. When you give up an average of 30 points per game, it’s kind of hard to beat anyone consistently, which is why I like West Virginia to win and cash in! My final score prediction is West Virginia 31 Arizona State 27
Older post
Newer post