NCAA Football Betting News
The South Carolina Gamecocks (3-5) are headed to Knoxville to take on the Tennessee Volunteers (4-4) in a Week 10 clash. The Volunteers overcame the loss to Alabama by dominating Kentucky on the road last weekend, and now it’s time to finish out strong with three of the last four games to be played at home. As for the Gamecocks, they will be looking for a bounce-back win having lost three of their last four games, including last weekend’s loss to Texas A&M. Here is a succinct online betting preview of this clash, including free NCAA Football betting picks.

After a convincing 52-21 win against Kentucky last weekend, it seems as though the Vols should be able to finish the season on a strong note. During the win, QB Joshua Dobbs completed 16 of 26 passes for 233 yards with two touchdowns plus one interception. WR Josh Malone also had an amazing outing against Kentucky, as he caught four balls for 104 yards and a touchdown, with Jalen Hurd added 61 yards and a touchdown on the ground. Given the way they took care of business against Kentucky, this offense should be good to ease past South Carolina’s porous defense that averages 27.4 PPG and 430.5 yards per game.For the season, the Vols’ defense (allowing 24.2 PPG with 403.4 YPG) has been the biggest concern with some holes that have allowed some cheap points. However, defensive coordinator John Jancek’s is reportedly making some strides to improve such deficiencies, so the expectation is that his team will be putting more pressure on opposing quarterbacks. Plus, the Gamecocks’ offense is averaging just 21.4 points and 364.9 yards per game and has turned the ball over 11 times this season, which doesn’t promise to be that big of a challenge. 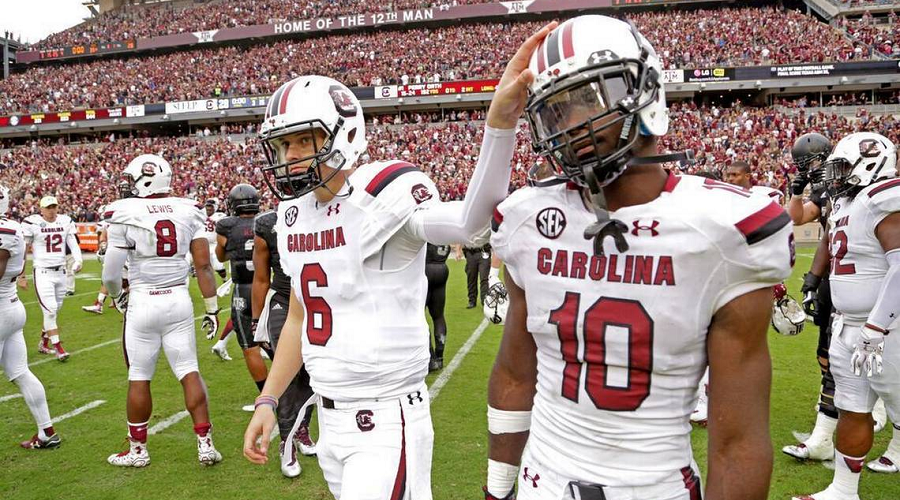 Conversely, the Gamecocks just can’t seem to gain any momentum this season. They faced off with Texas A&M last Saturday, and looked as though they might upset the Aggies for their second conference win of the season. However, after taking a 21-14 lead with 3 minutes left in the second quarter, South Carolina gave up 21 unanswered points and eventually fell 28-35 to Texas A&M. QB Perry Orth threw two interceptions, including a pick six against the Aggies as he completed 15 of 24 for 192 yards.For the South Carolina to win this upcoming matchup, Orth must get the ball to receiver Pharoh Cooper. The star receiver has had four 100-yard receiving games this year along with 44 catches for 609 yards. He has additionally scored four TDs through eight games, making him the best bet to bail out his team’s struggling offense.Meanwhile, the defense must also find ways of stopping the Vols’ explosive offense. South Carolina’s defense has done a pretty good job of forcing interceptions with a total of nine for this season. Even so, South Carolina is giving up more than 215 yards per game on the ground and this could give Tennessee a great opportunity to score multiple rushing touchdowns.

The Volunteers will have a huge home crowd support behind them in this game. In addition, they defeated a ranked Georgia team in their last home game, and they have a lot of momentum coming off a big win against Kentucky. As for South Carolina, they lost to that same Kentucky team at home earlier in the season, and they have been blown out several times this year. With that, we Tennessee should be good for the win and cover, possibly with an OVER total.
Older post
Newer post