NCAA Football Betting News
The North Carolina State Wolfpack (6-4) will return from a two-game road trip to take on the Syracuse Orange (3-7) in Saturday’s NCAAF lines. While the Wolfpack are looking for their first home win since September, the Orangemen have lost their last seven straight games after winning their first three, setting up a dicey contest that is up in the air for the taking by the team that will fight strongest for the win. Will the Wolfpack handle the fading Syracuse on Saturday, or will the Orange surprise the online betting odds with an unlikely upset? Read on to find out.

Betting on the NC State Wolfpack

In their last game, the Wolfpack were humiliated to a 34-17 loss by the Florida State Seminoles, a game in which they scored all of their points in the first quarter of the game before going on a scoreless run in the remaining three quarters. QB Jacoby Brissett passed the ball 47 times, completing 27 of his passes for 209 yards with one touchdown. He also added 17 carries for 25 yards with a TD on the ground. There was however very little support from Brissett’s offensive weapons, as RB Jaylen Samuels, carried the ball just 7 times for 23 yards with no TD, while David J. Grinnage, the Wolfpack’s leading receiver in that game, finished with 7 receptions for 63 yards. Needless to say, Brissett and his targets must fight and find ways of featuring better against the Orangemen, who are giving up 31 points per game with 451 yards per game. Defensively, NC State is giving up an average of 314.5 yards, 136.7 fewer than the Orangemen, who have especially struggled to contain the opponents on the ground and in the air. This defense should thus be able to offer more comfort at the back than their counterparts. Against the Seminoles, NC State forced five turnovers in the process, but was hurt by the nearly 500 yards and 34 points in the game. This D-line must therefore do a better job of keeping Syracuse out of the end zone if they are to avoid another regretful defensive showcase.

Betting on the Syracuse Orange

The Orangemen have had an embarrassing season with their string of unending losses in their last seven outings. However, they did show some grit against the top-ranked team in the nation last week, suffering a respectable 37-27 loss to Clemson. In that game, they were only down 7 points heading into the fourth quarter, but they couldn’t quite get the job done. QB Zack Mahoney went 8 of 21 for 80 yards with no TDs or interceptions in the loss. He however rushed the ball 10 times for 76 yards with two touchdowns. George Morris also had a good game, as he carried the ball 14 times for 80 yards. The receiving game, unfortunately, wasn’t able to muster much, with Steve Ishmael pacing the receivers with just 1 reception for 28 yards. If the Orange are to get a better performance, the receivers will need to join the party and offer viable targets to Mahoney, who showed real poise and good decision-making skills against the top-rated Tigers. As a keen note, the Orangemen will be going against a tough NC State’s defense that features one of the elite front fours in the entire nation. This unit is fronted by DE Mike Rose, who leads the ACC in sacks at 11, and is top ten in the nation in that category, with Bradley Chubb also chipping in with five sacks. This pair alone has dominated the opposing offensive lines, combining for almost 25 tackles for a loss. Syracuse’s offense will therefore need to prepare for a grueling battle against this group. On the opposite side of the ball, Syracuse’s defense has mightily struggled against the run and the pass, as was earlier mentioned. Fortunately, this defense could have some relief because Matthew Dayes, NC State’s leading rusher, who has run for 865 yards and 12 TDs already this season could skip the game due to foot injury. Nonetheless, Brissett, who has thrown for over 2,000 yards with 15 TDs on the year, is still a force to reckon and Syracuse’s defense must step up and find ways of limiting his efficiency. 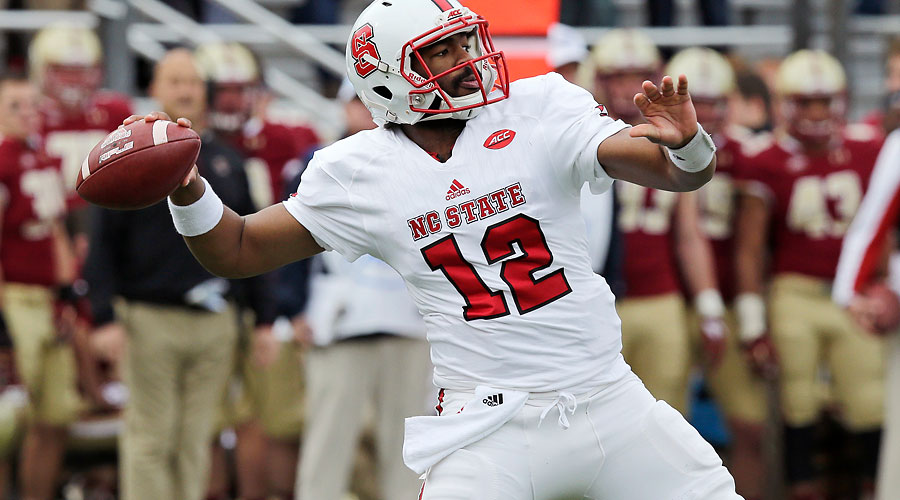 The Wolfpack are simply the better team of the two, so it only right that they are highly favored to win this game. The Orangemen have lost 7 games in a row and I do not think they will be able to keep up with NC State on the road. For this reason, NC State should be able to win this game rather easily, though be on the lookout for Syracuse giving their mighty best (like they did against Clemson) to ensure that the ATS goes to their supporters. Total-wise, both teams have decent offenses, which should set up a fairly high-scoring battle that will take the total OVER.
Older post
Newer post