NCAA Football Betting News
After the seismic shifts in last week’s College Football Playoff rankings, the top five remained the same. Clemson, Alabama, Ohio State and Notre Dame sit in those four catbird seats, with Iowa right behind them. The biggest changes came right behind Iowa, where Oklahoma State (10-0) sits at #6 and Oklahoma (9-1) sits at #7, fresh off an upset of undefeated Baylor.

So when Oklahoma and Oklahoma State square off in the yearly Bedlam game in two weeks, that matchup could be a play-in game for the CFP. It looked like Notre Dame would be able to hold onto that #4 spot as long as they won out, but an upset loss by Stanford makes a Notre Dame win over them in the season’s last week much less important. Florida and Michigan State are right behind the two Oklahoma schools at #8 and #9. The highest ranking for a team not in a Power 5 conference is #16, where Navy now sits. TCU has fallen all the way to #18 after holding off winless Kansas by a touchdown (and losing quarterback Trevone Boykin to injury to boot).Ole Miss had fallen out of the rankings but hopped back in at #22. Oregon and USC (#23 and #24) had once harbored playoff ambitions but now find themselves on the outside looking in. 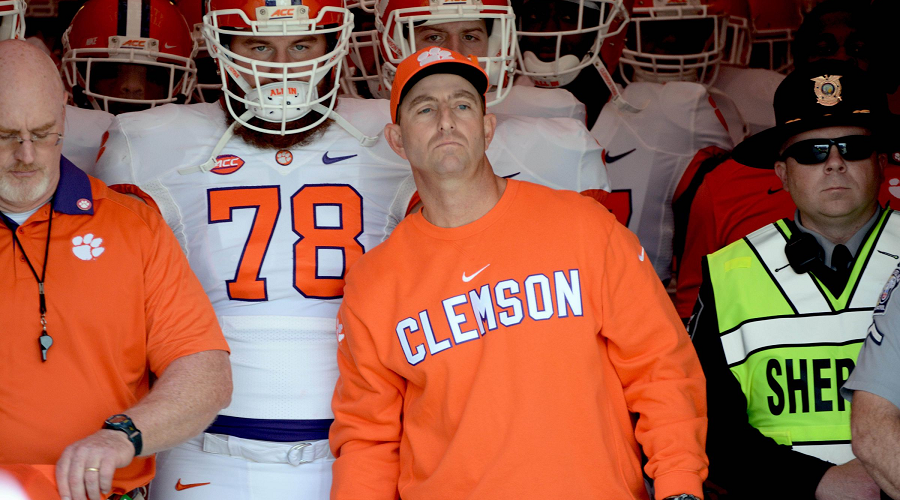 So what’s likely to happen with the final four? It appears that Clemson, Alabama and Ohio State will only fall out of the playoff spots if they lose. Clemson’s toughest remaining contest will be in the ACC title game against #17 North Carolina. Alabama has a fairly easy road too, with their rivalry game with Auburn still looming, as well as that SEC title game against Florida. It’s interesting that the CFP poll has Florida at #8 after they edged out Vanderbilt, of all people, by the underwhelming score of 9-7. Ohio State still has Michigan, Michigan State and the Big Ten title game to make it through. Given that Iowa likely awaits in that title game, the Buckeyes have the toughest road of anyone in the top 4.But what about that fourth spot? Notre Dame has played a tough schedule thus far, but Oklahoma State is unbeaten and has two huge chances in the coming weeks, as both Baylor and Oklahoma have to travel to Stillwater to take on the Cowboys.If Oklahoma makes it through with one loss, the fact that they lost to unranked Texas could weigh heavily on the committee’s decision.In any event, there will be multiple teams whose fan bases consider them deserving who will end up without a playoff spot. This might well be a shame, but it is also the cost of doing business when you have five conferences (and Notre Dame) playing for four playoff spots. It’s an expensive form of musical chairs that leaves people foaming at the mouth every year…but is also a lot of fun to watch.
Older post
Newer post