NCAA Football Betting News
Quarterbacks are continually changing the landscape of how the position is being played, especially with their unparalleled influence in NCAAF lines. As the 2015 NCAAF season progresses, NFL scouts continue to monitor their next class of passers in preparation for next year’s NFL draft. Irrespective of the run-heavy trend that these phenomenal playmakers are akin to these days, the list below features the cream of the college football quarterbacks, who are aiming to lead their schools to new levels of NCAAF betting success while also earning themselves solid points for good pro-selection.

Trevone Boykin is the clear-cut NCAAF betting favorite to win the Heisman trophy this season, and it doesn’t take a rockets scientist to figure out why. In his first season as a starter, he turned TCU around from a 4-8 record in 2013 to a 12-1 mark in 2014. Entering this week’s games, Boykin has thrown for 2,927 yards and 28 TDs with just five INTs this season. His biggest strength is that he has the size and speed to make plays with his legs. This is the reason why Boykin has rushed for over 500 yards with additional six scores on the ground this season, making him a hot prospect to go as a first-round pick in the NFL next year. Career-wise, he has 10080 total yards with 83 TDs and 32 INTs. Notably, the season-ending injury to Baylor quarterback Seth Russell has left Boykin as the top QB candidate for the Heisman trophy this season, an award that he could easily win and better his stock as a stellar NFL prospect.

Penn State’s Christian Hackenberg is one of the top pro prospects in college football today. At 6’4’’, 228 pounds, Hackenberg is a big QB with a live arm that can wreak havoc in the air. He, however, does not get the credit he deserves as a quarterback prospect, mainly because of the limitations of the offense he plays in. Those who know his stuff often compare him to Troy Aikman based on his overall look and skill set and that could probably propel him to the highest levels in the NFL. Entering Week 10, Hackenberg has a total of 7719 career yards with 45 TDs against 27 INTs. On the season so far, Hackenberg has totaled 1787 yards with 13 TDs against just two INTs, including 266 yard in the previous game against Illinois. With such numbers, do not be surprised if, at the end of the season, he finds his way atop most mock drafts.

After leading the Spartans to a Big Ten title and three Bowl victories, including one win at the prestigious Rose Bowl last season, Connor Cook has some sweet accolades to merit a spot among the best QBs in the NCAAF. This season, Cook is having a silently decent season with a 57.7 percent passer rating, 2070 passing yards and 17 TDs with juts 2 INTs. While those numbers are not as big as some of the QBs on this list, they are more impressive when you consider the kind of offense he leads at Michigan State. On the year, Cook has the opportunity to lead the Spartans to a Big Ten title and College Football Playoff appearance, which could continually push his stock higher. Be on the lookout for his performance when Michigan State plays Ohio State this month in a game that will decide his team’s fate in the run for the playoff. 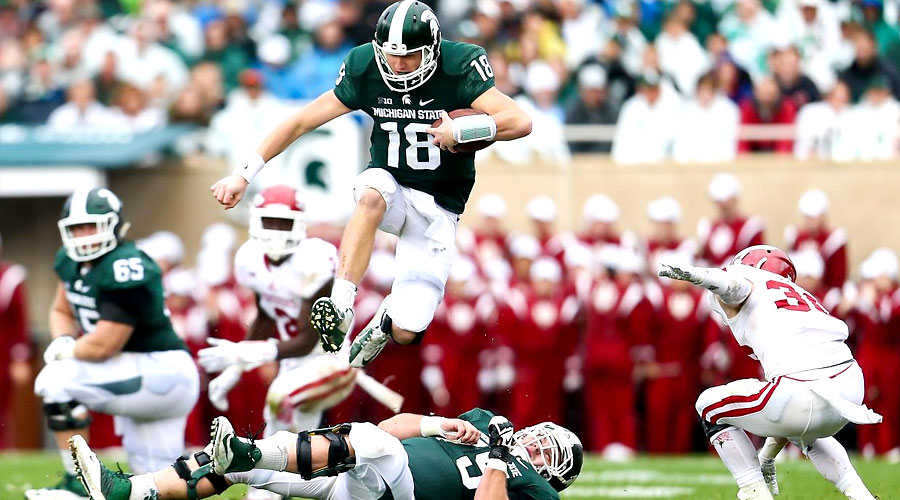 Despite recording a five-interception performance in the 30-24 loss to Utah in Week 6, Goff started the season well, leading California Golden Bears to five wins straight wins. And even after the massacre against Utah, the Novato-born QB bounced back with 295 passing yards and three touchdowns in the 40-24 loss at UCLA. Though he did not secure the win in that game, Goff had a superb display and did not turn the ball over against the decent Bruins defense. More notably, Goff boasts of completing well over 60 percent of his passes for 2537 and 22 TDs with 11 INTs on the year. With excellent size, arm strength, vision and on-field intelligence, Goff has the potential to become a star at the next level of his footballing career.

Kessler is a great quarterback due to his amazing pocket passing skills that could be very instrumental to his NFL drafting at the end of this season. Despite USC’s well-known struggles that saw their coach fired less than a month ago, Kessler has kept his stat line decorated with 70 percent completion of his passes for 2,268 yards and 18 TDs compared to just five INTs. And although he is not among the tallest passers at 6’1’’, Kessler has the arm strength and vision to make throws that even some current NFL quarterback wouldn’t manage. If he can continue to churn out solid numbers as he’s been doing so far, he has a promising future in the NFL. In his most recent game, he completed 81.1 percent of his passes last Saturday to lead USC to a vital win over California.
Older post
Newer post