NCAA Football Betting News
With just three games left in the regular season of the 2015 NCAAF odds, both the Arizona State Sun Devils (4-5) and the Washington Huskies 4-5 need two wins to qualify for a bonus December game. Unfortunately, the two programs have struggled in the conference play this season, and are coming off losses in their previous game. With the bowl picture starting to come into focus for all teams across the nation, this Saturday contest is therefore a must-win for the two schools, if they are to enhance their Bowl chances. Can Washington upset Arizona State at Sun Devil Stadium, or will the Sun Devils hold serve in the online sportsbetting lines? Read on below to find out…

The Arizona State Sun Devils are experiencing one of their worst runs of the season, having lost their last three straight games, including a 38-24 loss at the hands of Washington State last Saturday.  In that loss, the Sun Devils had a 14-10 lead at the end of the first half, but Luke Falk had other ideas, leading Washington State by scoring 28 points in the second half to give his team a thrilling win. The Arizona State’s offense was stagnant for much of the second half as they finished the game with a punt or an interception in three of their last four drives. All the same, QB Mike Bercovici decently went 27 of 44 for 229 yards with one touchdown, while Demario Richard rushed for 111 yards on 18 carries and one TD, and D.J Foster secured seven receptions for 71 yards. The three players, who’ve been the top offensive weapons in the team, must step up, along with the rest of the team, if they are to snap the Sun Devils’ losing streak this Saturday. Needless to say, it won’t be easy going against Washington’s defense that is giving up just 18.8 PPG with 358.5 YPG this season. While the Sun Devils’ passing attack is ranked 28th in the country, the defense has been a liability to the program, failing to make enough key plays in their last three loses. This is in spite of the fact that they are No. 5 nationally in tackles for loss, spearheaded by safety Jordan Simone and linebackers Salamo Fiso and Antonio Longino. Like their offensive counterparts, these defensive players pull up their socks and man up against the Huskies’ offense that is averaging 26.7 PPG with 354.2 YPG. On the opposing locker room, the Huskies have been up and down lately, going 2-3 in their last 5 games. They have not had a good defense, often relying on their defense to keep them within striking distance. Last Saturday, that formula failed to work, as they lost 34-23 to the Utah at home. They had an early 3-0 lead heading into the second quarter, but Utah exploded for 24 points before half time and never looked back. QB Jake Browning completed 23 of his 39 passes for 257 yards with a touchdown and an interception in the loss, while Myles Gaskin rushed for 93 yards on 20 carries and a touchdown. Jaydon Mickens was the top receiver with 5 receptions for 67 yards. Despite falling short last week, Browning and the Huskies offense should be able to take care of Arizona State’s porous defense that is giving up 32.2 PPG and 408.8 YPG. The Huskies defense that has been terrific all year long, with very few exceptions, also looks set for a big game. This defense leads the Pac-12 in scoring, yards per carry and touchdown passes allowed. Against the Sun Devils offense that has allowed more sacks and tackles for loss than any other program in the Pac-12 this season; Washington’s defense is more than capable of limiting their trips to the end zone this weekend. 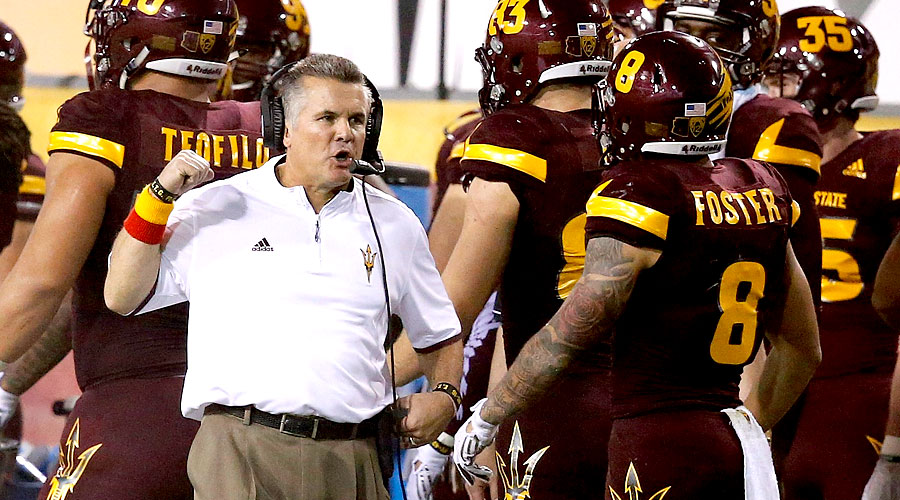 This will be a captivating matchup because both programs are fighting to keep their bowl hopes alive. The Sun Devils are capable of putting up points, but the defense has not looked good. As for the Huskies, their offense has not been that good, but their defense is usually equal to the task. Obviously, this game could go either way, but the Huskies look more potent, so a road upset looks ripe for the taking in the NCAAF odds. So in short, take Washington to win both the SU and ATS, with the total just about managing to stay low for an UNDER.
Older post
Newer post