NCAA Football Betting News
After Week 11’s NCAAF odds were riddled with all kinds of mega upsets from the Pac-12 to the Big Ten, you all know better than to bank all your hopes on Week 12’s online betting college football favorites. Keeping that in mind, here is a look at our select list of ranked teams that should on upset alert for Week 12.

No. 17 North Carolina at Virginia Tech

The Hokies have not had the best of runs this season, but with a bit of some luck, they’d have easily walked away with wins in their close losses against the likes of Pittsburgh, Miami and Duke this season. This should be a motivation for them to strive for a home win in this game, particularly because they’ve had nine days to prepare for this matchup. So although the Tar Heels are streaking on nine wins and are looking destined to go all the way to the ACC Championship game, bettors should not sleep on the Hokies, who have enough talent to cause an upset here.

No. 12 Michigan at Penn State

On paper, this game should be a rather easy win for Jim Harbaugh’s Michigan, given the strength of the Wolverines defense. Plus, the Nittany Lions (even with a talented QB as Christian Hackenberg leading the team) are yet to beat a ranked team in since coach James Franklin set foot in Penn State in 2014. However, a sad day could be in the offing for the Wolverines in the Happy Valley if they focus more on next week’s matchup against Ohio State and fail to give this game the seriousness it deserves. A similar lapse in concentration nearly cost them last week’s game against the Hoosiers, who torched the Wolverines for 307 rushing yards and fought them all the way to double overtime, narrowly losing 48-41. Caution must therefore be duly observed by the Wolverines in this game, or else they won’t be able to survive the Lions, who are reportedly craving for Wolverine flesh in this duel. 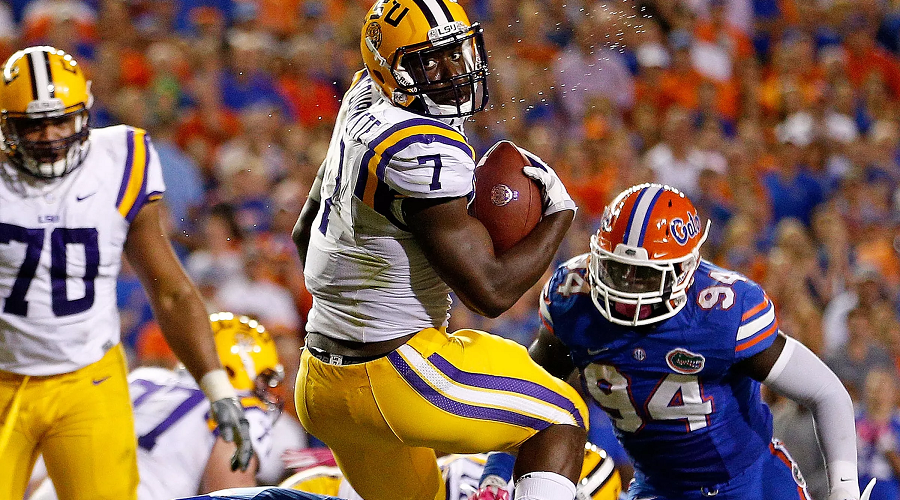 Barely two weeks ago, everyone was singing Leonard Fournette’s name, calling him all sorts of names used to describe the best running specimens on earth, with others likening him to many NFL Hall-of-Famers and star backs that are doing it big in the Pros. Right now, with LSU’s losses to Alabama and Arkansas, and Fournette not doing it as big as he did in LSU’s 7-0 start to the season; the star running back has become a butt of jokes all over the internet. Now, let’s get one thing clear—even with his recent struggles, you’d be hard-done to find a more complete running back in the college football right now better than Fournette. So although Ole Miss impressively ranks third-best in SEC rushing defense (3.19 yards per carry), we’ve seen some running backs get some decent yardages against them, something an angry Fournette with a point to prove should be able to do as well. Not to mention, LSU’s coach Les Miles reportedly has his job on line in this game, so his players (including his iffy QB) will want to give everything to win this game for him. With that in mind, the Rebels, who’ve had their share of bad performances on the season, must avoid taking this game lightly. If not, Fournette and LSU will shellshock them in a big way.

No. 9 Michigan State at No. 3 Ohio State

Yes, the Spartans have a half-healthy quarterback to lead them this Saturday, and the Buckeyes have more than enough quarterbacks to start for all the teams that will qualify for this year’s playoffs. But then again, this is a rivalry game, so anything can always happen. If you doubt that, ask the Oklahoma Sooners why they suffered an upset loss to Texas in a game they were favored to win by double digits. Not to mention, Ohio State is not yet as battled-tested as Sparty this season. While the Spartans have faced two ranked opponents (Oregon and Michigan) and beat both of them, Ohio State is yet to face (or beat) a ranked opponent this season. So you can talk all you want about Ohio State’s 30 straight wins in the Big Ten over the last three years, but while doing that, don’t forget that the Baylor Bears saw their 20-game home winning streak go up in flames last week against Oklahoma. Simply put, no winning streak is ever too good to be ended in the NCAAF lines.
Older post
Newer post