NCAA Football Betting News
As we usher in an exciting weekend of rivalry games in Week 12’s NCAAF betting, the State of Arizona will be split into two when the Sun Devils host the Wildcats this Saturday in a battle of supremacy in the State. This rivalry goes beyond the PAC-12 conference, tracing back to as early as 1899, so you can expect a fierce contest, as both teams give it their all for the win and bragging rights.The Wildcats have dominated the series over the years, leading the All-time head-to-head record at 48–39–1. Even more notably, the Cats got the better of the Sun Devils in their last meeting, winning 42-35. Can the Devils return the favor at home this Saturday, or will the ‘Cats get another one on their long-time foes? Find out as we take you through an online sportsbooks preview of this enticing clash.

The Sun Devils finally ended their three-game losing streak when they beat Washington Huskies 17-27 at home to make it 5-5 for the season. The Sun Devils started the game poorly going down 10-0 in the first quarter and by the end of the second quarter, they were trailing the Huskies 17-3. The Huskies, however, got complacent and the Sun Devils took advantage of that to get back in the game. Their defense stood firm against Washington’s offensive onslaught, denying them any chances of scoring in the last two quarters, while the Arizona State’s offense went on a Devilish scoring mode, putting up 24 points in the last two quarters to claim the morale-boosting win.After such a game, you can expect QB Mike Bercovici and his team to be all geared up to claim another win this Saturday. The starting Arizona State quarterback has a pass completion percentage of 59.8 and has tallied 2732 passing yards this season with 20 touchdowns against eight interceptions. Evidently, he is just as good as any other top passer in the Pac-12, so a good game can be expected from him in the aerial game, with Devin Lucien (his top target with 40 receptions for 540 yards and three touchdowns this season) also being a player to watch.Arizona State’s rushing game has equally been doing good things, led by Demario Richard (151 carries for 814 yards and six touchdowns). Essentially, that’s the reason the Sun Devils is decently ranked 52nd in the nation, averaging 31 points per game. The fact that they will be coming against a Wildcats defense that sits 106th in the nation, allowing 34.18 points per game, should give them a better opportunity of putting up some solid points, probably better than they did against the Huskies’ mean defense.Defensively, the Sun Devils have worryingly allowed a whopping 150 points in their last four games, though they’ve played relatively better in their the last two games, conceding 24 and 17 respectively after giving up 61 points against Oregon around three weeks ago. Even so, they will be going against a Wildcats offense that beat the stingy Utah Utes 37-30 last week, meaning they’ll have their work cut out for them.

Betting on the Arizona Wildcats

The Wildcats are coming into this encounter with a similar run like the Sun Devils, breaking a three game losing streak to beat Utah at home. The Cats, however, sport a better season record at 6-5, following that big win against the Utes, who entered that game with Pac-12’s best record. Contrary to popular opinion, the win was far from an easy one, as both teams had to trade blows all the way to overtime after a 27-all tie after four quarters.Remarkably, the Wildcats offense was impressive in this game, especially in the first quarter and the overtime, something that will need to continue this Saturday. This offense is spearheaded by young teenage sensation QB Anu Solomon, who has completed 62.7 percent of his passes and has 18 touchdowns this season against just four interceptions. The receivers are headed by Cayleb Jones with 46 receptions for 665 yards and four TDs Arizona’s rushing game is equally dutiful, manned by Nick Wilson, who has 127 carries for 718 yard for eight touchdowns.In their quest for a road win this Saturday, the offense will need all the wisdom it can muster from Solomon, considering the will face an improving Sun Devils defense that has been consistently reducing its opponent’s scores in the last three games, and held the Huskies to zero points in the entire second half of their encounter last week.Like their counterparts, the Wildcats have also had their fair share of burdens in the defense, having conceded at least 30 points in their last five games, a key reason why they have lost five of their last eight games. To have a winning chance, this defense will need to make enough plays throughout the game, or else the Arizona State offense that has scored 106 points in its last three games will torch them down for mega yardages and points. 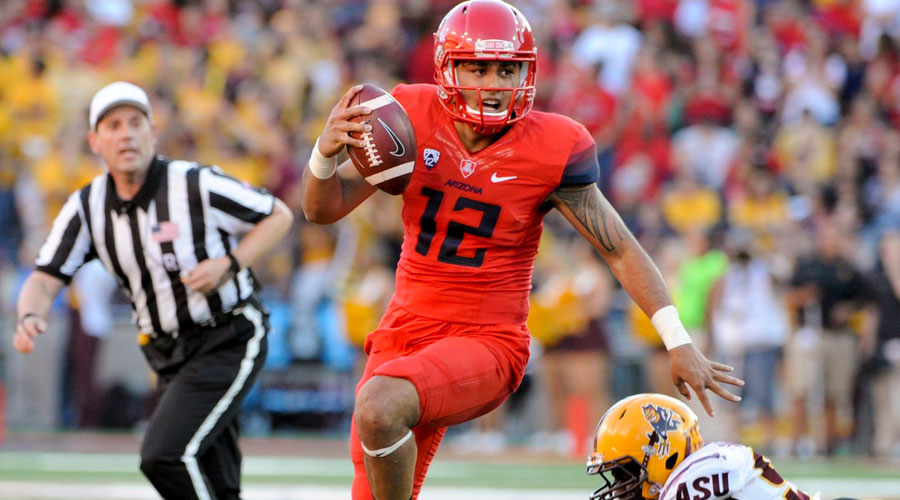 Comparing both teams, there isn’t much separating them this season, except for the fact that the Wildcats have a better winning record and they also brag of better head-to-record against their rivals in the series. However, Solomon has been listed as questionable due to injury, which brings a lot of weight into this game. If Solomon makes it for the clash, it will certainly give them some quality, even if it may not be 100% as they’d love. But if he is unavailable, then be sure that Bercovici will make this clash a one-sided encounter with a big home win for the Devils. Still, even with Solomon in the game, his not-full health is likely to affect his poise under the pocket, so expect the Sun Devils to take full advantage to claim the win plus cover, as the total most likely goes up for an OVER affair. Free NCAAF Picks: Arizona State for SU and ATS, total goes OVER.
Older post
Newer post