NFL News and Rumors
Seriously, what else does quarterback Cam Newton and Coach Ron Rivera need to do for you to be convinced that the Carolina Panthers are the best team on the planet right now? After jumping to an early 31-0 lead and eventually securing a statement win over Seattle two weeks ago, the Panthers made a mockery of being favored by just three points over the Cardinals in the NFL lines for the NFC Championship, taking a 17-0 lead in the first quarter and piling up more points in the rest of the game to secure an emphatic 49-15 victory.Up next for the Panthers is a battle against the Denver Broncos and their league-best defense. Once again, there are doubts as to whether or not Carolina will be able to live up to the expectations. Based on the following reasons, we strongly believe that the Panthers should be your one and only pick in the NFL lines to deliver a winning result over the Broncos.

In their only appearance in the Super Bowl during the 2003 season, the Panthers played spiritedly, but fell to the Patriots, 32-29. Since then, things have changed in Carolina, with none of the players from that Super Bowl team available in Carolina.

Contrary to popular opinion, that isn’t a bad thing; it only means that the Panthers team is composed of a new and highly motivated group that wants to make its own history. And to prove that they are a different unit, the Panthers have already broken several individual and team records this season, underling their worth and potential. Some of the most noteworthy accomplishments by the Panthers so far include:• The 34-point win over the Cards in the Championship game made Carolina just the fifth team to win its conference game in the Super Bowl era by 30-or-more points. Two of those teams (1991 Redskins, 2014 Patriots) went on to win the Super Bowl.• Luke Kuechly’s back-to-back interceptions against Seattle and Arizona (both returned for TDs) makes him the first player with multiple interception return TDs in a single postseason since 2006.• Newton’s 45 combined passing and rushing touchdowns from the regular season were most in the NFL and more than 27 of the other 31 teams in the league. His impressive numbers made him the first player in NFL history to throw for at least 30 touchdowns (35) and rush for at least eight touchdowns (10) in the same regular season campaign.• The Panthers won a franchise-record 15 games during the regular season, and if they can win the Super Bowl, they will become just the fourth team in NFL history to win 18 games in a single season (including playoffs). Two of the other three teams (1984 49ers, 1985 Bears) won the Super Bowl as well.In short, when you are looking at this year’s Carolina team, you better consider them as a different team, rather than hold their questionable history against them. 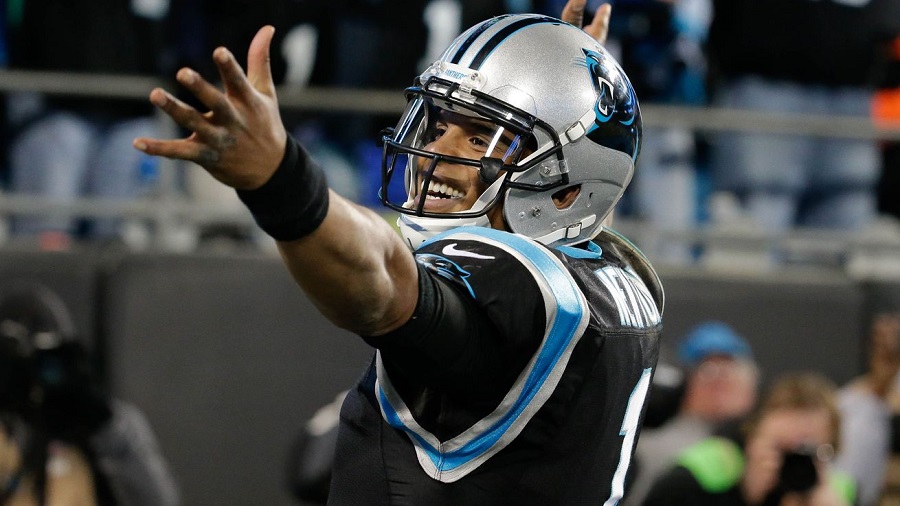 After all, history is made to be broken, and going by the many records they’ve broken so far, it wouldn’t be far-fetched to bank on them to exit the group of 13 teams in the NFL that are yet to win a Super Bowl.

Fluid Carolina Offense is Nearly A Sure NFL Pick

En route to the Super Bowl, the Panthers just lost one game, and it was actually a close single-digit loss to Falcons on the road. Outside that defeat, the Panthers have been extremely efficient, especially in the offense. Newton, as has already been glimpsed by his records, is having a season for the ages, having thrown or rushed for a whopping 50 touchdowns this season (including playoffs). The same goes for his top receivers Ted Ginn Jr. and Greg Olsen, who are solidly supported with a strong running game that is streaking running game that has rushed for 100-or-more yards in 31 successive games—the third-longest streak since the 1970 merger. And after making light work of Seattle’s #3 defense and Arizona’s #4 defense, scoring 30-plus points in the process, there is definitely a good chance that the Panthers will be able to find more-or-less the same success against Denver’s #1 defense.

Whereas the Panthers didn’t lead in scoring defense or passing defense like the Broncos, they did actually have a quietly solid season on the defensive side of things, with both the offensive and defensive lines offering a lot to smile about.According to Pro Football Focus, the Panthers offensive line ranked second during the regular season. This should be able to figure much better against the Broncos than New England’s 25th-ranked offensive line did last week.On the defensive line, the Panthers were just as pretty good, leading NFL in turnover differential (+20), takeaways (39) and points off takeaways (148) in the regular season. This defense has continued to impress in the postseason, forcing nine turnovers (including seven against Arizona’s #1 ranked offense) with 32 points off the turnovers in the playoffs, both tops in the NFL. Meanwhile, Kuechly and Thomas Davis, who led all linebackers with four picks each in the regular season, have also stayed true to their defensive ways, with the Panthers posting six interceptions in the playoffs, including four against MVP contender Carson Palmer on Sunday. Mind you, this is the same unit that intercepted an NFL-best 24 passes in the regular season. Against a middling Arizona offense that has been troubled by miscues in the regular season when playing tough defensive teams, this should be a very favorable matchup for the Panthers.

Though the Panthers are just 1-3 SU and 2-2 ATS in their all-time record against the Broncos, including the 36-14 loss by a Newton-led team against a Manning-led Broncos team, the team Denver will be facing this week is entirely different—in a good way—which should bode well for their winning agenda. Added to the fact that Coach Rivera knows what it takes to win the Super Bowl, having already done so as a player in 1985, and the overall balance in the Carolina team; the Panthers should be a near-sure bet to win Super Bowl 50.
Older post
Newer post