NFL News and Rumors
Payton Manning and the Denver Broncos will look to bounce back from their first loss of the season when they host Alex Smith and the Kansas City Chiefs in a Week 10 AFC West divisional matchup on Sunday at Sports Authority Field at Mile High. Now, let’s find out if the Broncos can bring home the bacon and avoid the upset against their longtime rivals with our NFL online betting preview.

Kansas City has won two straight including their emphatic 45-10 spanking of Detroit in Week 8 while easily cashing in as a 3-point home favorite.   Chiefs quarterback Alex Smith completed 18 of 26 passes for 145 yards and two touchdowns while rushing five time for an additional 78 yards and one score. The Chiefs went 6 of 7 in the red zone and converted 8 of 13 third downs while scoring four rushing touchdowns.  “We know he can run,” Reid said of Smith. “We don’t really want him to run, but if it’s works out that way … it’s OK.”   Now, the Chiefs will look to pull off the big upset after handing the Broncos a ‘gift’ win in their 31-24 home loss in Week 2.”They got us. I said that after the game,” he said. “They won the game. That’s all that counts. You move on and you get ready for this game.”

The Broncos are coming off a stunning 27-24 loss against underachieving Indianapolis last weekend while failing to cover the spread as a 3-point road favorite.   Peyton Manning completed 21 of 36 passes for 281 yards with two touchdowns, but also tossed two costly interceptions in the loss. “When you don’t play as well as you would like, it’s hard to win on the road,” Manning said. “We just didn’t play well enough.” 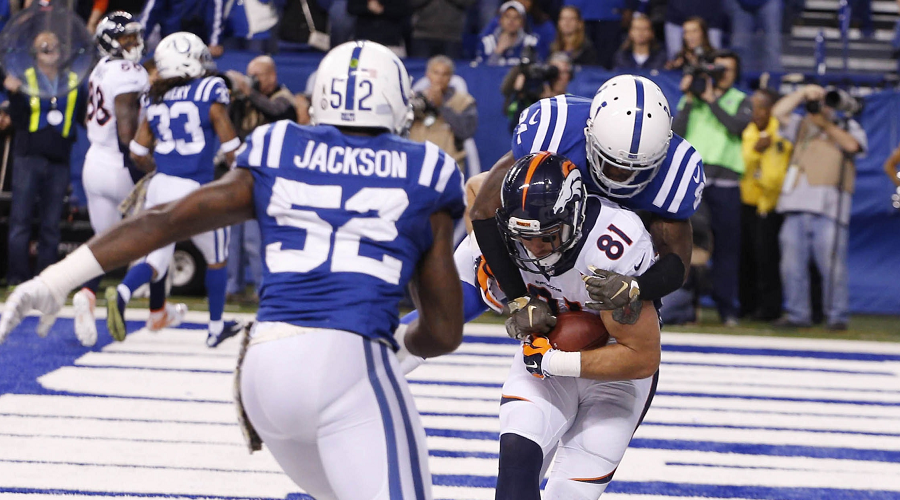 The Broncos got a fine game from tight end Owen Daniels as the veteran caught six passes for 102 yards and one touchdown. “We were just out of whack,” said Broncos safety T.J. Ward. “It wasn’t the scheme that got us. It was assignment errors and penalties.”   Denver ranks 14th in scoring (24.0 ppg) and a league-leading first in points allowed (17.4 ppg), but was limited to just 35 rushing yards in the loss on 14 team carries.

Well, any chance the Kansas City Chiefs had of pulling off the upset over Denver in their Week 10 AFC West divisional showdown went right out the door with the Broncos loss to Indianapolis this past weekend. Denver has won nine of its last 10 home games while going 6-4 ATS over the span. Conversely, the Chiefs are just 3-7 SU and ATS in its last 10 road games and an awful 1-6 SU and ATS over its L/7 road dates.   The Broncos are also 8-2 SU and 5-5 ATS in their last 10 home games against Kansas City, including 3-2 ATS over their last five. While the Chiefs average just a shade more than the Broncos offensively, Denver is far and away the better defensive unit and they’ll have plenty to play for as they try to keep pace with the unbeaten Patriots and Bengals.   Denver wins in convincing fashion to cover the spread!   My Betting Pick: Broncos 27 Chiefs 17
Older post
Newer post