NFL News and Rumors
Sometime before the 2015-16 NFL season kicked off officially, we did a preseason NFL odds prediction article focusing on the Denver Broncos as a team to watch in the AFC. I won’t be boring you with all the details about that article—you can read it here for yourself—but as key issues worthy of being noted, we said Denver was a good value to team to bet on in odds to win Super Bowl 50. In addition, we predicted that the Broncos were good for the following three NFL picks:

If you were keen enough to note those picks and bet on them, we should be probably getting a case of beer from you because we right on ALL those three picks, along with our prediction that Denver were good enough to finish with the best AFC record in the AFC at the end of the regular season.Of course, a few things didn’t go exactly as was said in the article… i.e. Peyton Manning got injured so didn’t carry the team throughout, but the depth of the team (read that Brock Osweiler), along with their expected mean defense, still prevailed, so we can be pardoned for not being word-for-word correct in our narrative. Plus, the last time I checked, nobody ever gets the full narrative correctly…and we can be given a free pass for those few nitty-gritties because we were spot-on in ALL our NFL betting predictions.That trip-down-the-memory-lane left aside, the reality on the ground now is that the Broncos (12-4) own the No. 1 seed in AFC playoffs, a feat they have achieved despite facing tons of adversities (and stiff competition) throughout the season. And by all accounts, they truly deserve to be considered as the top team in the AFC, something that is ascertained by Oddsmakers, who place them as 10/1 favorites to win the 2016 Super Bowl 50.Are the Broncos overhyped, or are they worth their salt? Can Denver’s defense continue to shine or will the offense-oriented NFL playoffs prove too much to handle? Is the Manning/Osweiler-led offense capable of taking the Broncos to the very top of the nation? Find out our two-cents of opinion on all that, complete with another set of hot NFL picks.

Why Bet on the Broncos to Win Super Bowl 50

Without stating the obvious notion about how all great quarterbacks tend to finish their careers in style, let me simply tone it down and say that the 2016 Super Bowl looks magically set for Manning to take, as he looks to end his prestigious career in sterling fashion. Yes, the Manning we’ve seen this year (and even last year) has been far from the vintage Manning we’ve gotten accustomed through the years, but this 39-year-old man is still able to lead scoring drives and inspire his team to victories. You need the best example, look no further than his Week 17 performance against San Diego, where he entered the game in the third quarter and led the Broncos to a much-needed come-from-behind win over the Chargers. Whether or not his banged-up turnover-friendly will once again show up in the playoffs is anyone’s guess, kind of like the still up-in-the-air question about who will get the starting quarterback role. What’s certain is that Manning’s presence and experience in the playoffs (on the field or sidelines) will bring a lot of value to value, something that is worth betting on to take Denver as far as the Super Bowl 50 Championship game. 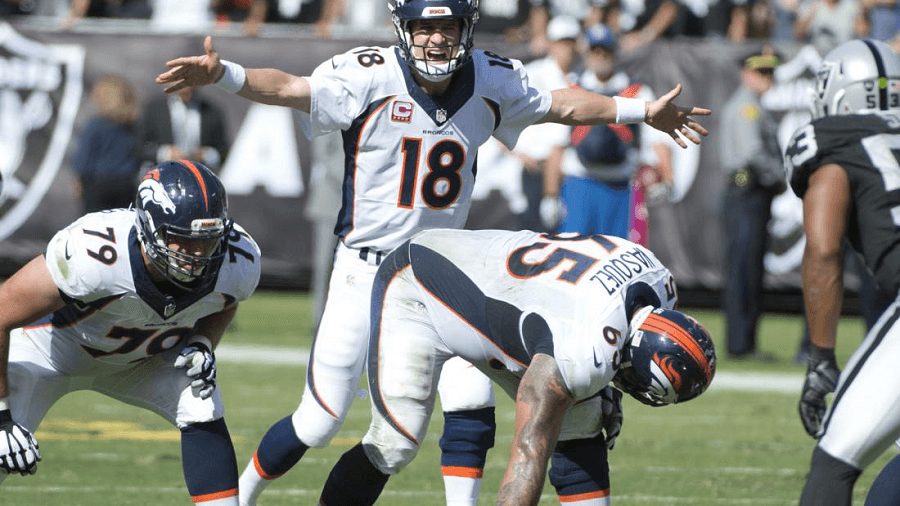 Speaking of starting quarterbacks, Osweiler’s stint in at the starting QB role showed that he is Denver’s future. He is not as explosive like Manning, or the kind of signal-caller that throws for 4 or 5 TDs in a game, but he is good at making reads, grinding out the clock and his cautiousness makes him less error-prone, something that blends perfectly with Denver’s always conservative game. So, even with inexperience of playing in the playoffs, he is worth a whole lot more than many over-confident QBs in the playoffs who are highly likely to make mistakes this year because of their know-it-all attitude.If the passing game won’t carry Denver, then be sure that the team’s red-hot running game, led by C.J. Anderson and Ronnie Hillman, will be more than capable of offering support, if not taking over the game completely.And if all fails in offense, then Von Miller and his defense can always do the secondary dancing. Denver’s dominant defense finished the regular season ranked best in total defense so finding (and capitalizing on) opponent’s mistakes should be possible, given that they’ve been doing that all season.Not to mention, the prospect of facing Houston, Kansas City or Pittsburgh in the divisional round should be very manageable for the extra-rested Denver team that will have a fortnight to prepare for their first playoff game. After that, experience, commitment and hard work should be able to push them all the way to the end, at least according to what the Broncos fans have been saying.

As was explained in our preseason article, a concoction of bad luck and injuries has been the main reason behind Denver’s failure to win it all since Manning joined the Broncos. Entering the postseason games, Denver is nursing a number of injury concerns, some of which could come back and haunt them once their playoff campaign begins. Additionally, whereas Denver’s defense can be trusted to show up even in the toughest of games, the same cannot be said for the Broncos offense that finished the season ranked 19th overall in scoring, putting up just 22.2 points per game. The biggest questions here particularly come in the passing game that, though moving the ball slightly better since Osweiler took the reins, is still finding efficiency in the end zone in terms of touchdowns. If Coach Gary Kubiak and his offense cannot find a way of passing the ball in a better way, it will be very difficult for Denver to win games against potential highly-attacking opponents like Pittsburgh, New England and (god-forbid) Arizona/Carolina/Seattle in the National Championship Game.

This being Manning’s most-likely last shot at claiming the Super Bowl ring that has eluded him since he joined the Broncos, a factor that is likely to see him play for his life throughout the playoffs (if he does get a chance over Osweiler). With such motivation, a good backup/starter in Osweiler, the support of an increasingly fluid ground game, and a league-best defense; the Broncos should certainly be able to go all the way. Yes, injuries are concern, but having managed to claim an AFC-best record with a banged-up squad, doing the same for three more games should be possible. As for the lingering questions regarding the offense, we all know that none of the teams in playoffs are perfect. I mean, Arizona was reduced to less than 10 points at home by Seattle, the Packers have been shredded severally this Season, The Patriots were beaten by the Jets and the pathetic Dolphins in Week 17 (Are you kidding me?), and the Hawks were actually lucky to get into the postseason games, having started the season so poorly and even lost to the mindless Rams less than two weeks ago.All that considered, betting on Denver to reach the National Championship game and winning the 2016 Super Bowl is not only an affordable betting decision, but one that is advisable to jump on right now, considering the Broncos are trading at just 10/1 to win Super Bowl 50. This should especially be vindicated by the fact that Denver’s magical season continues to get better (despite several setbacks) and the return of an inspired Peyton Manning, a man hell-bent on achieving a heavenly mission, continues evoke more confidence that might just be the year for the Broncos to perch themselves atop the world.
Older post
Newer post