NFL News and Rumors
The Dallas Cowboys are jumping for joy that quarterback Tony Romo is back under center after missing nearly two months because of injury. After getting their first win following seven straight losses, the ‘Boys are hoping to pull off one of the biggest upsets of the season when they host Cam Newton and the unbeaten Carolina Panthers on Thanksgiving Day. Now, let’s find out if Dallas can pull off the big NFL odds upset for Turkey Day betting buffs everywhere.

The Cowboys snapped their seven-game losing streak by handing the Miami Dolphins a humbling 24-14 loss in Week 11 to cash in as 2.5-point road favorites just as I predicted. Tony Romo completed 18 of 28 passes for 227 yards with two touchdowns and two interceptions while Darren McFadden rushed for 129 yards on 29 carries. “Winning,” Romo said, “is going to put a little more pep in everyone’s step. I got more comfortable as the game went on.” Defensively, the Cowboys limited Miami signal-caller Ryan Tannehill to just 188 passing yards while picking him off once and limiting the Fins to just over 21 minutes of possession. Romo had to shake off the rust of sitting in abysmal weather. “We looked like our old selves in a lot of ways,” tight end Jason Witten said. “That’s the way it’s supposed to be,” Romo said. “That’s why it’s the NFL. You almost take it as a challenge, and it makes it almost more enjoyable.” Dallas is ranked 27th in scoring (19.0 ppg) and 15th in points allowed (22.8 ppg).

The Panthers jumped all over the Washington Redskins in their 44-16 Week 11 win as a 7-point home favorite to remain undefeated. Dual-threat quarterback Cam Newton completed 21 of 34 passes for 246 yards and five touchdowns and the Panthers limited Washington to just two second half points after jumping out to a 31-14 halftime lead. 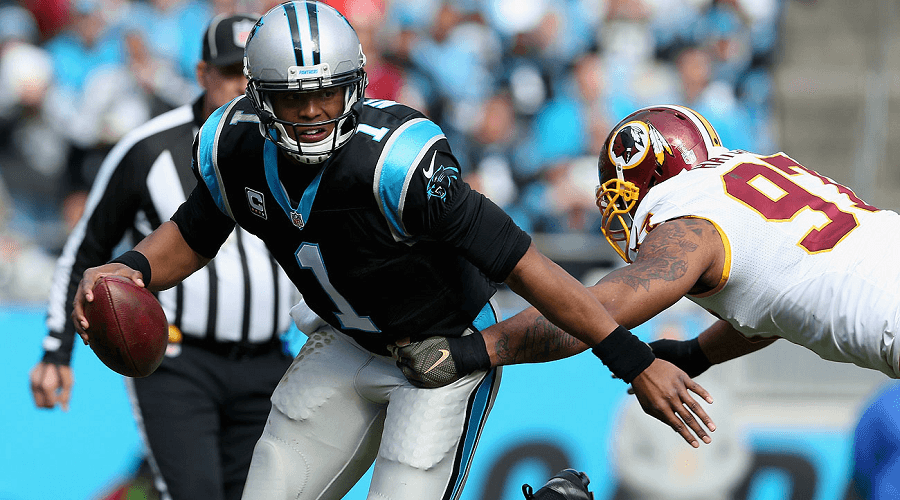 “I have labelled myself as a pocket passer with the ability to run,” Newton said. The Panthers remained unbeaten but say they’re not focused on the regular season at this point. “They don’t give out trophies for the regular season,” Olsen said. Carolina’s defense picked off Washington quarterback Kirk Cousins one while forcing five fumbles and recovering four. “Between the fumbles and the picks, we had a couple short fields,” Olsen said. “You’ve got to take advantage of them. We didn’t sit on them. I know we scored a lot of touchdowns, and that’s obviously what you’re looking for.” Veteran running back Jonathan Stewart added 102 rushing yards on 21 carries in the win and Newton completed passes to eight different receivers. “He has a good command of what we’re doing out there,” Rivera said of Newton, who has 20 TD passes this season — four shy of his career high with six games left to play. Carolina is ranked an eye-opening third in scoring (29.9 ppg) and a stellar fifth in points allowed (19.1 ppg).