NFL News and Rumors
The New York Jets will look to bounce back from their Week 10 loss to beat Houston on Sunday, but doing so may not be as easy as it once looked with the Texans coming into this contest playing their best ball of the season recently. Now, let’s find out which AFC playoff hopeful will win and cash in!

The Jets will be well-rested after getting a bye in Week 10 following their 22-17 Week 9 loss against division rival Buffalo as 2.5-point home favorites. Now, the Jets know they need to bring their ‘A’ game if they’re serious about getting one of the two AFC Wild Card berths. Veteran signal-caller Ryan Fitzpatrick will be under center despite having surgery on his thumb last week.Fitzpatrick completed just 15 of 34 passes for 193 yards with two touchdowns and two interceptions against the Bills. The former Texan, said he is itching for a chance to get back at the team that traded him. “I’ve been on enough teams now to where you don’t hold grudges, but (the trade) plays into it,” he said. “The fact that they didn’t necessarily want me at the end of the year plays into it a little bit for me from the personal standpoint.”New York ranks 12th in scoring (24.1 ppg) and a stellar ninth in points allowed (20.4 ppg) while also ranking first against the run.

The Texans have won two straight and three of four, including their surprising 10-6 win behind backup quarterback T.J. Yates over Cincinnati on Monday nightStarting quarterback Brian Hoyer completed 12 of 22 passes before leaving with a concussion in the second half. Veteran backup T.J. Yates came in to lead the Texans to victory and will get the start in this contest after hitting wide receiver DeAndre Hopkins with a 22-yard TD passes late in the final quarter. 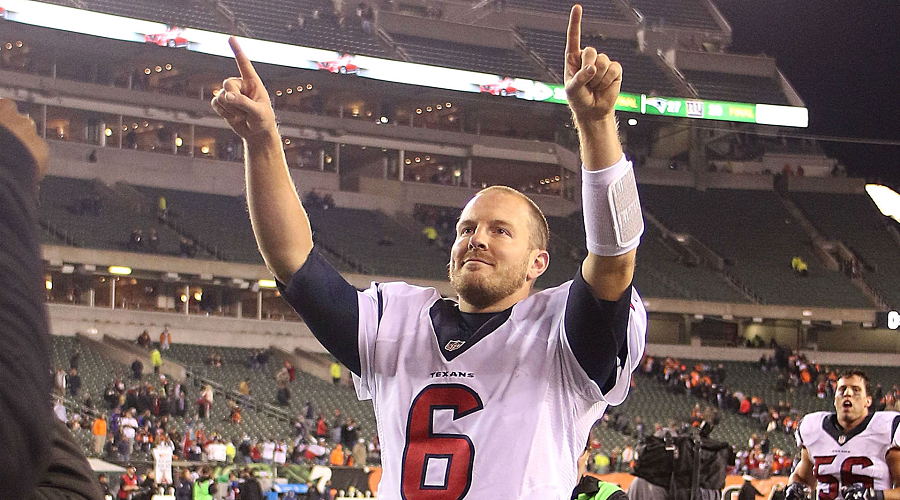 Now, Yates will get the start again after rejoining the Texans last month. “It’s a little nostalgic,” said Yates, who also rallied the Texans to an improbable win in Cincinnati in just his second career start nearly four years ago. “I have a lot of good memories in Cincinnati.”The Texans have racked up an insane 11 sacks in winning their last two games. “We already knew what we had. It was just eliminating mistakes, penalties and just playing the way we know how to play — smart, fast, aggressive football,” Mercilus said.The Texans are ranked 26th in scoring (20.4 ppg) and 18th in points allowed (23.4 ppg).

With quarterback injuries surrounding this matchup, no NFL line has been released as of yet and likely won’t be. No matter, I’m going with the Jets to bounce back and get the outright road win against Houston.I know the Texans just handed the Cincinnati Bengals their first loss of the season, but I love New York’s aggressive defense and I believe they’re going to force T.J. Yates into a couple of more mistakes than Houston’s defense forces Ryan Fitzpatrick to commit.New York is 4-1-1 against the spread in their last six road games while Houston has gone 4-12-1 ATS in their last 17 games following an SU win.My Pick: Jets 20 Texans 17
Older post
Newer post