NFL News and Rumors
The Detroit Lions will look to get their first road win of the season when they visit a ‘desperate’ Green Bay Packers team that has dropped two straight following its red-hot 6-0 start. Now, let’s find out if Matthew Stafford and the Lions can pull off the huge NFL Online Betting upset and hand Aaron Rodgers and the Pack their third straight loss for the first time since 2013.

The Lions got a bye in Week 9 following their front office and coaching upheaval that made assistant Jim Bob Cooter a first-time offensive coordinator.
The Lions also fired their team president and general manager and are reportedly going to give head coach Jim Caldwell the ax at the conclusion of the regular season. Defensive coordinator Teryl Austin is the man thought to be the front-runner for the job if Caldwell is fired.
Despite their massive overhaul, the Lions suffered an emphatic 45-10 Week 8 blowout loss against Kansas City while never coming close to covering the spread as a 3-point road dog.
Enigmatic quarterback Matthew Stafford completed 22 of 36 passes for 217 yards and one touchdown but also tossed two costly interceptions in the loss. More importantly, the Lions couldn’t stop Kansas City fro m scoring in every quarter while failing to score in the middle two quarters themselves.
Things got so bad that Stafford was relieved late in the final two minutes of the game by Dan Orlovsky. Following the game, Caldwell said he was unconcerned about losing his job. “Not a good outing obviously,” Caldwell said. “It’s a day to day job. I’m going to continue to do my job.”
Chiefs quarterback Alex Smith tossed two touchdown passes and ran for another. “We just failed to execute,” said Stafford, who was sacked four times in the loss. The Lions are ranked a pitiful 31st in scoring (18.6 ppg) and 32nd in points allowed (30.6 ppg).

The Packers have dropped two straight games including their humbling 37-29 Week 9 loss against Carolina as a 2-point road favorite. 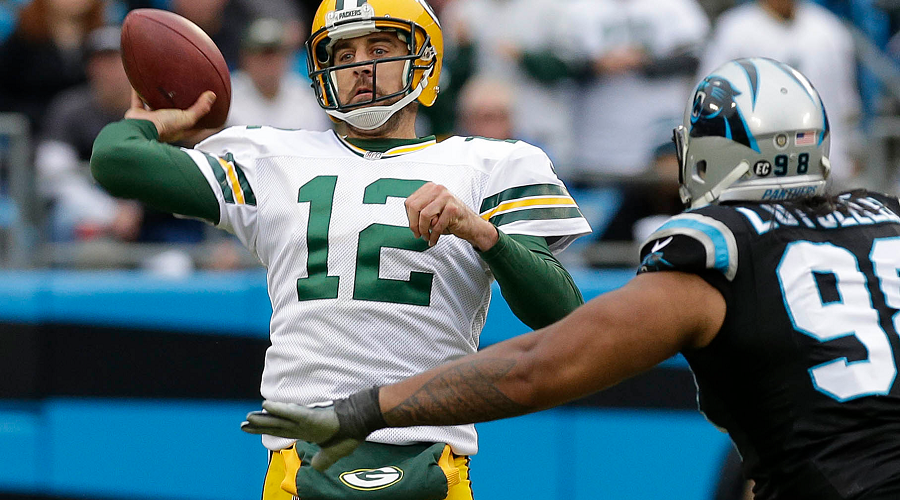 Aaron Rodgers completed 25 of 48 pass attempts for 369 yards with four touchdowns and one interception, but Green Bay was held to just 71 rushing yards in the loss while allowing Panthers quarterback Cam Newton to throw three TD passes and rush for another.
“It’s going to hurt a little bit, obviously,” Packers wide receiver Davante Adams said. “That’s not the type of game that we are capable of playing, but we just have to look past it at this point.” The Packers were frustrated and it showed as a trio of defensive players got into a brief skirmish on the bench. “Guys are emotional, that’s part of the game is emotion,” offensive tackle Bryan Bulaga said. “No one is pointing fingers at anybody. That’s not what we do here.”
The Packers are ranked 10th in scoring (25.4  ppg) and 12th in points allowed (20.9 ppg).

The Packers have dropped two straight and have plenty of motivation to get the job done against their NFC North division rivals, but I like Matthew Stafford and company to give Green Bay all they can handle and then some before falling in a something of a shootout.
Green Bay has not covered the spread in each of their last three games following an impressive six-game ATS winning streak and are just 2-6 ATS in their last eight home games versus a team with a losing road record and a surprisingly poor 3-9 ATS in their last 12 games in the month of November.
Detroit has gone 0-4 ATS in their last four games against the Packers, but strangely enough, the Lions have also performed well after a pitiful performance, going 10-3 ATS in their last 13 games after scoring less than 15 points in their previous game.
Call me crazy, but I like the Detroit Lions for the ATS cover if not the outright road win!
My Pick: Packers 35 Lions 27
Older post
Newer post