NFL News and Rumors
Both the Lions and the Bears have been a huge disappointment for betting and football fans. They have failed to fulfill their expectations and haven’t offered much value this season, although, the two squads are set to square off Sunday afternoon in a NFC North showdown at Soldier Field, and we have an NFL odds analysis and betting preview for this game.

Why Bet The Detroit Lions Odds as a Pick ‘Em

Because they’re playing excellent football at the right time!The Lions have won two straight and five of their last six games including their convincing 32-17 spanking of San Francisco last weekend.Quarterback Matthew Stafford is completing a blistering 66.9 percent of his passes for 3,964 yards with 29 touchdowns and 13 interceptions. The strong-armed signal-caller has tossed seven TD passes over his last three games.Johnson and Golden Tate have combined for 1,865 receiving yards and 14 touchdowns while running back Theo Riddick set a franchise single-season record for receiving yards by a running back on Sunday. For the season, Riddick has caught 76 passes for 668 receiving yards, more than double the 316 he had last year in his second season.Elusive rookie running back Ameer Abdullah leads the rushing attack with 553 yards and two touchdowns. The Lions average 22.3 points per game (18th) while allowing 25.3 points per game defensively (25th).Now the Lions are campaigning for head coach Jim Caldwell to return in 2016.“Yeah, man, I love him,” Calvin Johnson said of Caldwell. “I think everybody in the locker room would probably say the same thing. He commands respect, but he doesn’t have to do much. It’s just his character, guys gravitate towards him. He’s easily one of my favorite coaches I’ve had.” 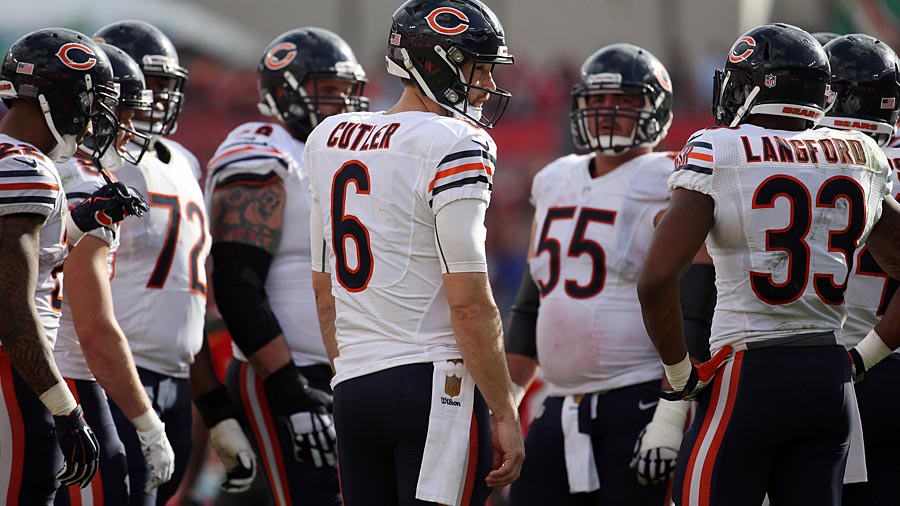 Why Bet The Chicago Bears Odds as a Pick ‘Em

Because they’re playing at home.The Chicago Bears picked up a nice, 26-21 win over Tampa Bay last weekend to snap a three-game SU and ATS skid, but they’ve underachieved all season long in averaging 21.0 points per game (21st) and allowing 24.9 points per contest defensively (20th).Believe it or not, veteran quarterback Jay Cutler has not been the problem at all this season as he’s completed 63.9 percent of his passes for 3,414 yards with 19 touchdowns and just eight interceptions.Now, Chicago is looking for revenge after falling to the Lions 37-34 in overtime on Oct. 18. To beat the red-hot Lions, Chicago must figure out how to corral Detroit’s talented receiving core after allowing them to run wild in their previous meeting this season.Calvin Johnson caught six balls for 166 yards while Lance Moore had five catches for 106 yards and Golden Tate, another five catches for 40 yards. All three players had a touchdown catch.“They’re talented at all skill positions,” Bears cornerback Tracy Porter said. “They have two, three dynamic running backs that can make things happen with the ball in their hands, so we have a task out for us on defense.”